Mercedes-AMG has accepted that electric engines are the future, so the power house is planning on developing a high-performance unit that would make its way under the bonnet of the future high-performance vehicles built in Affalterbach.

In a statement for Autocar, Mercedes-AMG’s director of vehicle development, Drummond Jacoy, was quite frank about the EV future of the car maker. The V8 units are probably living their last moments of glory, but “AMG has shown in the past, with the electric SLS years ago, that it has the capabilities in all-electric drive”, he said. “That was a very impressive vehicle for its time and we’ve nurtured that technology and the learning we have from hybrid vehicles.”

Jacoy bets on AMG’s ability to reinvent itself, instead of clinging to old technologies.

“As soon as Mercedes starts a car, we’ll look at what we can do. We’ll have to reinvent ourselves there (with electric cars), obviously, because the sound of a V8 is not going to be there if it’s a pure-electric vehicle. It’s not starting from scratch, but we’re going to have to look at what the AMG story is with an electric vehicle. 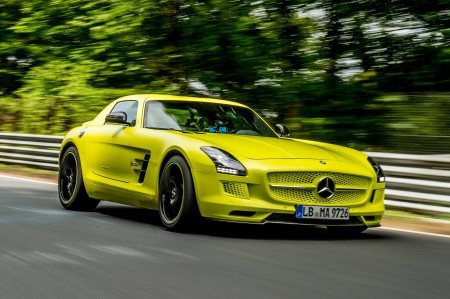 The car company is not going to drop the V8 in a couple of years, but it will provide the possibility for customers to choose eco-friendly power vehicles with state-of-the-art technology, so an electric supercar conceived in Affalterbach is only a matter of time.

Mercedes-Benz has already announced that every new model it launches starting 2018 will have a plug-in hybrid variant. The company will send a diesel PHEV onto the road and the executives hope that it will be a real game-changer. The EQ sub-brand is also under development and will soon see the light of day, comprising all battery electric vehicles built by the company, together with the associated products and services.