Mercedes-AMG S 63 Cabrio revealed ahead of its time

The S-Class family is almost complete with its last member, the S-Class Cabrio, now only months away from the showrooms. The hottest version, Mercedes-AMG S 63 Cabrio, is revealed by our spy photographers.

Mercedes’ S-Class range is now wider than ever. While we’ve already sampled work of arts like the short and long-wheelbase limousine, the ultra-luxury Maybach and the gorgeous Coupe, we’re still awaiting for the arrival of the first S-Class Cabrio of the modern era.

Today we can marvel at the first spy pics showing its most powerful and exotic iteration, the Mercedes-AMG S 63 Cabrio. Strong bumper modifications also reveals that this no ‘mild motorized’ version of the S-Class Cabrio. Like the Coupe, the Cabrio will most likely get both the 63- and the 65 AMG version. There’s no replacement for displacement! The heart of the new Mercedes-AMG S 63 Cabrio will be the current 5.5-litre twin-turbo V8 engine good for 585 hp. 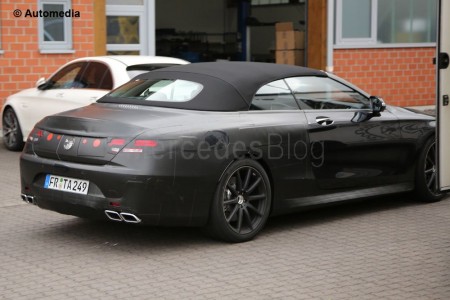 Showing strong similarities to the Coupe, the model in the photos has the characteristic four exhaust pipes at the rear and the now traditional large diffuser adorning the lower end of the car. The new S-Class variant features a conventional soft-top. Given its size and weight related issues, the solution of a rigid retractable roof has been dismissed for packaging reasons.

We expect to see the Mercedes-Benz S-Class Cabrio at the Frankfurt Motor Show, this September. The new model will storm into the showrooms early next year, costing close to 150,000 euros.