Mercedes-AMG retires the A 35 Sedan from the U.S. lineup

Mercedes-AMG retires the A 35 Sedan from the U.S. market. It was the cheapest AMG that American customers could get their hands on. The hot hatch though was never in the range in the States.

The Mercedes-AMG A35 joined the American lineup in 2020. But it didn’t stay long. The hot sedan has already been dropped from the U.S. market. The reason should be the low sales figures, but Mercedes is not rushing into forwarding an official argument for the move.

“The A35 will not be offered in the U.S. market for MY22”, Mercedes-Benz spokesperson Ashley Gillam confirmed for Car Buzz. Mercedes already removed the model from the online configurator. 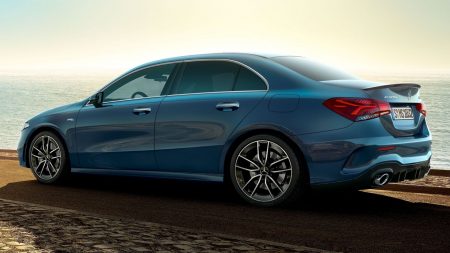 Mercedes sent the A35 out into the world of hot compact sedans with a 2.0-liter four-cylinder turbocharged engine of 302 horsepower and 295 pound-feet (400 Newton-meters) of torque. The seven-speed dual-clutch automatic transmission (the AMG Speedshift DCT 7G) and the all-wheel-drive 4MATIC system channel resources to both axles. The car thus runs from zero to 60 mph (96 km/h) in 4.8 seconds, before it maxes out at the electronically limited top speed of 225 km/h (140 mph).

Mercedes-AMG A 35 leaves more room for the CLA 35

With the Mercedes-AMG A35 dropped from the lineup, customers who want a sporty compact could go for the CLA 35 4-door coupe. It is yet uncertain if the latter will continue to battle for a spot on the grid in the segment. Mercedes might consider ditching it as well, even though the company has just put an end to cannibalization with the late A35. Further up in the range, there is the CLA 45 with 382 horsepower. Demand will decide the company’s next move.

The Mercedes-AMG A 35 Sedan was an American-only affair.  Mercedes sells an extended-wheelbase version of the A 35 in China, for the customers who are willing to pay E-Class money to get an entry-level sporty limousine.