The Mercedes-AMG Petronas Formula 1 team broke silence after three days of absence from all social media. The team announces that it withdraws appeal. They hold FIA accountable for the result and congratulate Max Verstappen for winning the Drivers’ Championship.ey

Mercedes-AMG Petronas has finally left the heartbreak behind and released a statement. After considering the possibility of an appeal to the Court of Arbitration for Sport, the Brixworth and Brackley team will rather work to “create clarity for the future, so that all competitors know the rules under which they are racing and how they will be enforced.”

The team was completely silent for three days after the race. “Together with Lewis, we have deliberated carefully over how to respond to the events at the Formula 1 season finale. We have always been guided by our love of this sport and we believe that every competition should be won on merit. In the race on Sunday, many felt, us included, that the way things unfolded was not right.”

Mercedes appealed twice and the FIA commission decided against them just as many times. Max Verstappen would remain Drivers World Champion. That is despite the fact that Lewis led almost the entire race in Abu Dhabi and lost the title in the very last lap on a controversial decision by race director Michael Masi.

It is also the first time that Mercedes shows any signs of celebration after having won a record-breaking 8 consecutive Constructors Championships in a row. “This is an unprecedented achievement. In simple words: it’s awesome. You are awesome”, the statement shows. 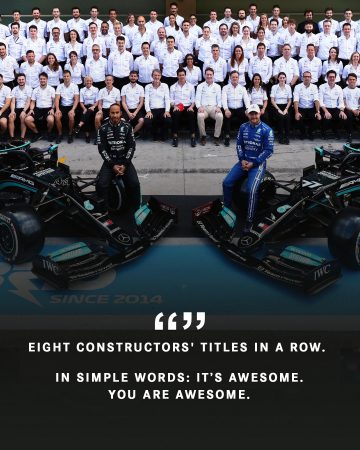 A photo of the entire team also showed up on their Facebook page. Lewis Hamilton and Valtteri Bottas sit on the front wheels of their racing cars. Right behind them, there is the Team Principal Toto Wolff, holding a red cap, in the memory of Nicki Lauda.