Lewis Hamilton achieved his 75th career victory in Bahrein, winning the first race of the 2021 season. The Brit also broke Michael Schumacher’s record of most laps led in Formula 1. The record previously stood at 5,111 laps.

Valtteri Bottas accounted for the fastest lap of the race at the Bahrein International Circuit, with 1:32:090, on the final lap of the race. That last lap though got everyone’s attention for a whole different reason. It was the one that decided the winner. 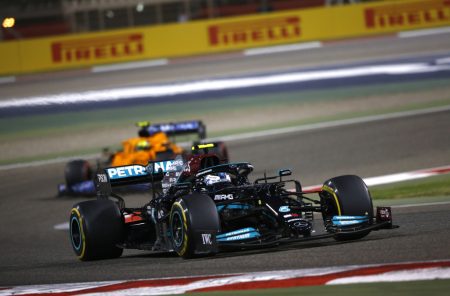 Max Verstappen had managed to get past Lewis Hamilton with only a few laps to the end. The Dutch had to give that lead position back to the Brit though, following a wide cornering. Red Bull Racing and Mercedes-AMG Petronas put on quite a strategy show in Bahrein. Max hunted Lewis all the way to the end, but had to settle for the second position.

“Max was all over me right at the end but I just about managed to hold him off. It was one of the hardest races I’ve had for a while so I’m really grateful for it and massively thankful for the men and the women back at the factory and here, for continuously pushing the boundaries and never giving up, even if we do feel we’re behind. But we love the challenge, I love the challenge, I love what I do”, Lewis Hamilton said in a burst of joy.

Mercedes-AMG Petronas continues yesterday’s celebration. The Facebook page of the team shows an image of the racing car pulling the ship blocked in the Suez Canal for a whole week was freed today and Mercedes.

“Don’t worry. We’ve got this”, is the caption accompanying the “photo”.

Don’t worry. We’ve got this.

Posted by Mercedes-AMG Petronas Formula One Team on Monday, 29 March 2021