Mercedes-AMG Petronas had to settle for the 2nd and the 3rd position in the anniversary race to celebrate 70 years of Formula 1. The three-pointed star team had locked the grid in Silverstone, with Valtteri Bottas in pole and Lewis Hamilton starting second.

After having extended his contract with Mercedes for one more year, Valtteri Bottas had to prove that the team had done a great deal. So he started from pole in this season’s second race in Silverstone. Home favorite Lewis Hamilton started second.

Max Verstappen kept blowing in the back of their necks and, in the 12th lap, the Dutch closed in on Lewis Hamilton, even though the team had warned him that he was wearing his tires out. “I am not going to drive like grandma”, he replied. 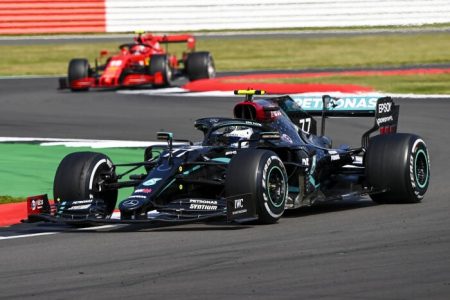 Valtteri Bottas boxed for a tire change, while Lewis remained on the racetrack for the duel with the Red Bull’s driver. Not for long though, as the Brit went in as well and returned in the 6th spot, while Bottas was rolling in the 4th. Lewis immediately swept passed Ferrari’s Charles Leclerc.

By lap 20, it was already clear that Max Verstappen was going for a one-stop race. “Forget tire management”, he was told.  And when he did box, he did it when Bottas did it and came out, as expected, ahead of the Finn.

Lewis Hamilton was trying to widen the 13-second gap between him and Verstappen. But his left rear tire was starting to look really bad, with blisters showing up on it. “It is not going to blow, is it?”, he asked his engineers. Lewis had gone through hell last week in Silverstone, driving through the last lap with a flat tire.

“The tire actually boiled”, Bottas explained after the finish line. 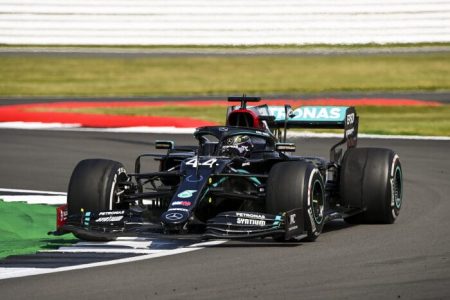 Eleven laps to the end, Hamilton boxed for new tires and he had to chase Leclerc for the third spot. He passed by the Ferrari driver in lap 46 and started hunting for teammate Bottas. Less than 9 seconds separated him from the leader of the race, Verstappen. The two Mercedes drivers were free to race each other. And so they did, with the Brit winning the internal competition. Second was the best he could do, as Max Verstappen had his first victory this season in Silverstone.

Lewis Hamilton leads the overall ranking with 107 points, followed by Max Verstappen with 77 and Valtteri Bottas with 73. Mercedes is at the top of the Constructors ranking with 180, while Red Bull holds 113 points. Ferrari is third with 55.