Valtteri Bottas of Mercedes-AMG Petronas will start from pole position in the Austrian Grand Prix, the first race of the season delayed by the coronavirus outbreak with almost four months. His teammate, Lewis Hamilton, snatched the other spot on the first row of the grid.

The Mercedes-AMG Petronas drivers, in their new black racing cars, split record-breaking times on different sectors of the Red Bull Ring in Spielberg, Austria, in the Q2 session. A Q2 that Ferrari’s Sebastian Vettel failed to qualify from, much to his and the team’s disappointment.

Valtteri Bottas broke the time record of the racetrack as well at his first stopwatched outing in the Q3, with  1:02.939, and got his 12th career pole. The Finn from Mercedes saw his teammate Lewis Hamilton closing in on him at 0.122 seconds and eventually at 0.012 seconds. Bottas made a run into grass and gravel following a childish error. 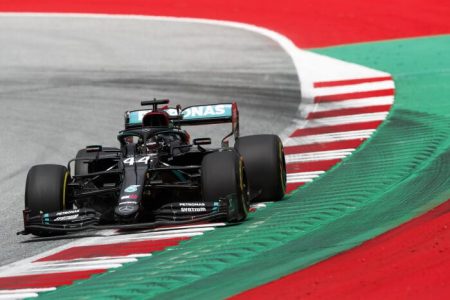 “I missed these feelings, you know, the qualifying shakes are something special when you push the car to the limit. Obviously, I’ve been preparing for this for a long time; it feels so good, I cannot say more than that. Our team has done an amazing job, we seem to be on our own league”, the Finn from Mercedes-AMG Petronas stated wearing a mask, as the new prevention regulations impose. The Formula 1 season was delayed by almost four months due to the coronavirus outbreak.

The starting grid of the Austrian Grand Prix, the first race of the Formula 1 season:

Max Verstappen of Red Bull and Lando Norris from McLaren occupied the second row of the starting grid in Austria.

Ferrari has a lot on their mind right now. The 7th spot on the grid was all that Charles Leclerc could do, while Sebastian Vettel had to settle for the 11th spot, in the first race of his last season with Ferrari. The German has already announced his split from La Scuderia.