Mercedes-AMG Petronas has just made the announcement. What is happening with Lewis Hamilton?

Elena Luchian, December 1, 2020
1.82K 1
Home Auto news Mercedes-AMG Petronas has just made the announcement. What is happening with Lewis Hamilton?

Mercedes-AMG Petronas has just made the announcement. Lewis Hamilton has tested positive for COVID-19. The driver will miss the next race in Bahrein.

Lewis Hamilton underwent three COVID-19 tests last week, as part of the the regular testing programme in Formula One. And all of them were negative. One of them was carried out on the day of the race won by the Mercedes driver, following Romain Grojean’s horror crash.

But Lewis woke up with mild symptoms on Monday morning. A new test showed that he was positive. The driver underwent a retest for confirmation and the result was the same. Not long before getting the result, he had received the news of being in contact with someone positive, right before flying to Bahrein.

He is now isolating and following the treatment prescribed, in accordance with the COVID-19 protocols and with the public health guidelines in Bahrein. He will have to remain in Bahrein until further notice.

The Mercedes-AMG Petronas staff that was in contact with the driver will also undergo testing.

Lewis Hamilton, the third driver in Formula 1 with a COVID-19 infection

Lewis Hamilton is the third driver in Formula 1 that contacted a COVID-19 infection. Sergio Perez received a positive result at Silverstone and Lance Stroll tested positive in Germany.

The news is a big headache for Mercedes-AMG Petronas. The team must find a replacement for the British driver for this upcoming weekend. Mercedes reserve driver Stoffel Vandoorne will travel to Bahrein and might start in the Mercedes racing car on Sunday. The team is yet to announce who will drive along Valtteri Bottas at the Sakhir circuit.

Lewis will retest again in two weeks’ time. Only then he will know for sure if he will be able to start in the last race of the season, in Abu Dhabi. The Brit has already crowned himself a World Championship title holder following his success in Turkey. 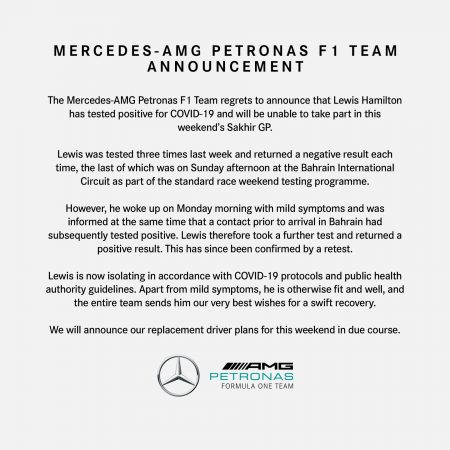