Mercedes-AMG introduces the 2,250-horsepower Cigarette 41’ Nighthawk AMG Black Series. It is the boat that drew inspiration from the AMG GT Black Series.

The Cigarette 41’ Nighthawk AMG Black Series is the lucky 13th boat developed during the longstanding partnership between the two companies. Thus the AMG design team and Gorden Wagener, Chief Design Officer for Daimler, worked closely with the Cigarette experts to develop the ultimate water speedster.

Like its land counterpart, the Cigarette 41’ Nighthawk AMG Black Series sets new standards in performance in its segment. It is the first in its range to feature five racing-grade outboard engines. There are five 4.6-liter V8 Mercury Racing 450R engines which deliver 450 propshaft horsepower each. Only two levers are necessary to control all five engines simultaneously. The combined 2,250 horsepower output makes the boat speed up to over 90 mph. It may not seem much on land, but it is in this large center console segment. 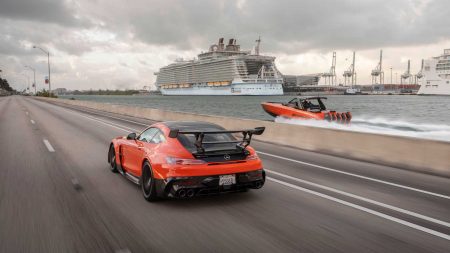 The boat sports the Magmabeam orange and black exterior, similar to the one of the AMG GT Black Series debut paint scheme. There are AMG logos towards the bow of the boat in a repeating pattern.

The layout of the boat focuses around a central console with a helm and a cabin in the center of the boat. Passengers can walk around on both sides. A feature that makes Cigarette Racing Team center console unique is its advanced hull design. It incorporates a refined “twin step” design. It is a step forward in efficiency.

The interior is mostly in an elegant combination of grey and black with orange accents, similar to the exterior color scheme. The Cigarette Cool upholstery is on display. It dissipates the heat so that the dark colors remain comfortable even when exposed to direct sunlight. There are two rows with three seats per row at the front. The front row features height adjustability, thus providing the captain with an ideal seat height. Six people can seat forward facing behind the central helm. 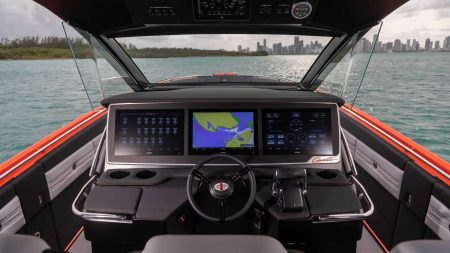 An L-shaped lounge at the rear of the boat and a U-shaped seating area at the bow make it complete the design that favors entertainment and relaxation.

There are three Garmin 8617 multi-functional displays flush-mounted to an instrument panel CNC-cut from a solid block of aluminum.