The new season of the German Touring Car Masters (DTM) got under way during the first weekend of May in Hockenheim. The second DTM race taking place at the EuroSpeedway Lausitz at the end of May will see the Mercedes-AMG GT S make its first appearance as the official Safety Car. As part of the DTM, the three manufacturers regularly switch their Safety Cars, meaning that the GT S will also be deployed at the fourth race in Zandvoort, Netherlands (10 to 12 July) and at the final race in Hockenheim (16 to 18 October).

The drivetrain of the Safety Car is identical to that used on the road-going version of the AMG GT S. With a maximum output of 375 kW (510 hp) and peak torque of 650 Newton metres, the 4.0-litre V8 biturbo engine guarantees high-end performance: the GT S accelerates from a standing start to 100 km/h in 3.8 seconds and attains a maximum speed of 310 km/h.

Only a small number of modifications were required to transform it into the DTM Safety Car. The AMG SPEEDSHIFT DCT 7-speed sports transmission corresponds entirely to the series production unit, for example. The AMG DYNAMIC PLUS package with which the Safety Car is equipped is optionally available to any GT S customer for a further increase in driving dynamics. It comprises dynamic engine and transmission mounts and a specific engine application in “RACE” DYNAMIC SELECT transmission mode and in manual transmission mode “M”. The package also includes tauter spring and damper tuning, more negative camber at the front axle as well as an adapted speed-sensitive sports steering system. 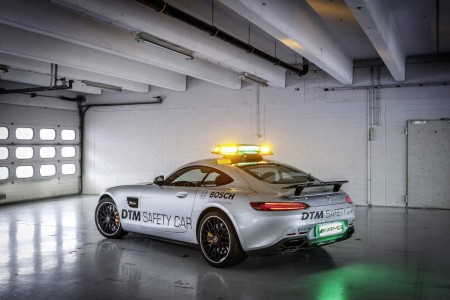 In terms of appearance, the Mercedes-AMG GT S Safety Car differs from the series production vehicle above all by virtue of the striking light bar on the roof. It is positioned on a carbon-fibre air scoop which offers the least possible airstream resistance while at the same time providing for an aerodynamically optimised flow of air towards the fixed rear aerofoil. The positioning and design of the carbon-fibre air scoop and the light bar are the result of extensive wind tunnel tests. The additional front spoiler as well as the rear aerofoil reduce lift at the front and rear axles. Both form part of the Aerodynamics package which is also available for the road vehicle, as fitted to the exclusive “Edition 1” model.

All signalling functions on the light bar are performed by fast-responding, energy-efficient LEDs: orange (as soon as the Safety Car is deployed, the orange LEDs are switched on. The flashing orange light in the middle and the steady lights on the outer ends of the light bar indicate “absolutely no overtaking”) or green (when the GT S takes up a position in the middle of the field at the beginning of a Safety Car phase, the two central LEDs on the front and rear of the light bar are switched from orange to green. Green lights indicate to all DTM drivers that the Safety Car is to be overtaken). 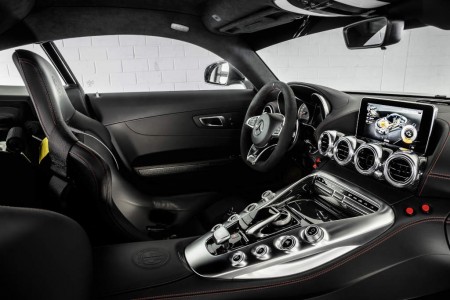 The Safety Car runs on particularly light cross-spoke forged wheels with fully integrated wheel bolt covers. The forged wheels painted in matt black with high-sheen rim flanges are fitted with tyres in standard size 265/35 R 19 on 9 x 19 (front) and 295/30 R 20 on 11 x 20 (rear). This wheel/tyre combination is also optionally available to customers for the Mercedes-AMG GT and the GT S.

At the wheel of the official Safety Car will be racing driver Jürgen Kastenholz (47). He takes to the track when dangerous situations, such as an accident, extreme weather conditions or other incidents make it necessary for the vehicle to be deployed. The objective is to achieve maximum safety for the drivers, spectators and track marshals. After receiving a radio message from the race organisers, the Safety Car takes up its position at the head of the DTM field and guides the cars around the track until the normal course of the race can be resumed once more.