Mercedes-AMG GT S meets two unexpected rivals in Autocar comparison test. Porsche 911 GTS and Jaguar’s F-Type R are the new kids on the block. Should the mighty Merc be afraid? Read on to find out what British magazine Autocar has to say.

Mercedes-Benz decided to replace the brawny SLS with a smaller, lighter, imminently faster successor. What seemed like a good idea on paper proves to be even better in practice. According to our colleagues from Autocar, the Mercedes-AMG GT, AMG’s first truly home-grown sports car, is a loud, dramatic coupé worthy of its heritage. 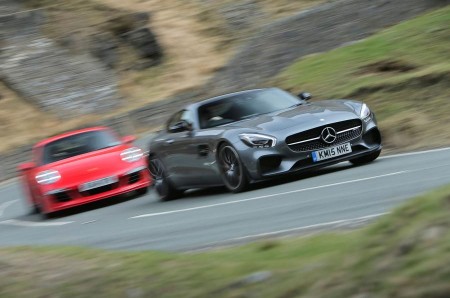 What about the competitors? 911 GTS develops ‘only’ 424bhp, being a better fit against the regular 456bhp Mercedes-AMG GT but Autocar thinks it still stands a chance, relying on core strengths like low-weight and amazing chassis tuning. The Jaguar on the other hand manages the unthinkable and surpasses the AMG with its 542bhp arsenal. All three cars sent their power resources to the rear wheels, while the Porsche is the only one with the engine mounted at the rear.

In Mercedes’ case, the dry-sumped 4.0-litre V8 drives the rear wheels through a seven-speed dual-clutch automatic transaxle gearbox. That gives the AMG a slight rearward weight bias – only 48% front, 52% rear. With its two turbos nestled between the two banks of cylinders, you might think that this particular V8 might lack the aural experience you’d come to expect from a fully-fledged supercar. 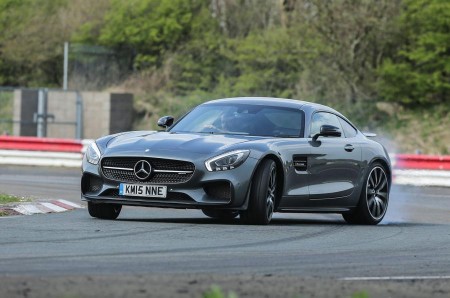 Fortunately, that’s not the case. The AMG GT S erupts with the kind of yelp that wouldn’t disappoint if the engine were twice the capacity. Suitably enriched by it, you toddle off. Immediately the GT feels wide, and immediately its steering feels light. Too light? Perhaps. It’s quick to change direction although it stops just short of the nervousness that afflicted the SLS’s rim.

The ride is controlled, the body movements held in fine check and the controls responsive. The fun, though, even at upper-middling speeds, comes from the noise, the visuals and the event, rather than any visceral engineering feedback. 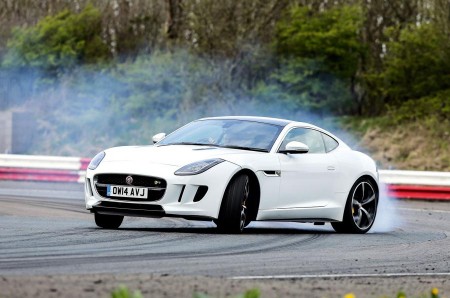 Jaguar’s F-Type R Coupé comes from the same school, apparently, erupts with a similarly strong bark on start-up, though a sharper, edgier one, compared to the AMG. Its character is also different. Sporting a supercharger rather than turbos on its 5.0-litre, the F-Type is ridiculously rapid and snapping, hiding the fact that its 502lb ft doesn’t make a full appearance until 3500rpm, as opposed to Merc’s 479lb ft from 1750rpm.

Autocar thinks that the F-Type steers with more weight and no less precision than the GT. It does feels a heavier car overall, showing that it is 5kg fatter, at 1645kg for the GT and 1650kg for the F-Type. Body movements are limited, the steering gives back what you need and, like the GT, there is crackle and theatre to absorb and engage you. Less so than in the GT, but ultimately it’s just as adept. Both of their tailors, though, use similar cloth. 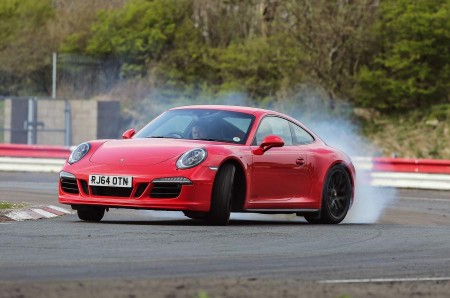 Which brings us to the 911 GTS, whose outfitter has been using a unique cut since 1963, to some effect. That’s why it has the smallest engine, with the least power, and is the narrowest and the lightest car here. The flat six is smooth and the only engine here that does without forced aspiration. If you want your 424bhp, you’ll have to reach to 7500rpm. Even obtaining the mere (by these standards) 325lb ft you’ll have to take the engine to 5750rpm.

The 911 is simply more visceral. From the moment the 911 turns a wheel, you are reminded of what a fabulously tuned, honed, at once familiar and yet still enthralling ‘hello, old friend’ experience this 911 is. Its lightly loaded front end allows the steering’s assistance to be knocked right back, so it has confident weight, excellent road feel and all the precision you could ask for. 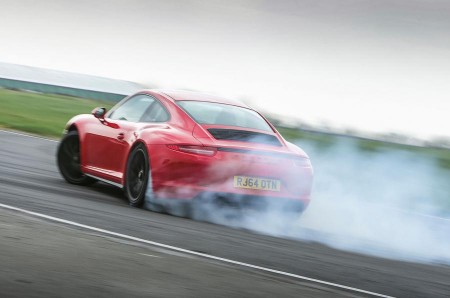 There’s also one noticeable difference. In the two front-engined coupés, you can surf their torque to make good road progress. The 911 is happier in the mid-range: 3500rpm in fourth gear gives you 65mph and excellent response, and from where a downshift or two under braking gives you the perfect revs for the job.

That the 911 has a mechanical limited-slip differential (the other pair’s are electronically controlled, for more refinement) and a 42/58 front-to-rear weight bias mean that it feels like its nose will push on slightly, but it’s just a 911 characteristic, Autocar is quick to point out. 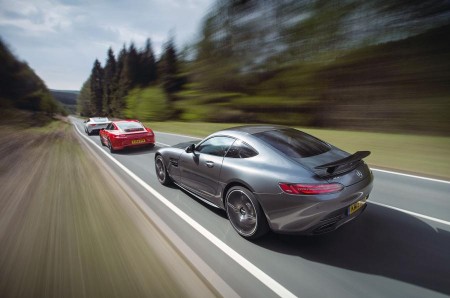 So what’s the verdict? The Britons think the Mercedes-AMG GT makes a noise to die for, it impresses in many ways that it ought to and, if you were buying a car of this type to use daily, sensibly and to be seen in, its rewards and attractions are immediate and obvious. So what’s the problem? Its name is 911. A lighter, less powerful, but ultimately more engaging car to drive. And a cheaper one on top of that. And the Jaguar? Autocar says the Mercedes-AMG GT S simply ‘out-F-Types the F-Type’, making the British coupe slightly irrelevant.

Head on to Autocar to read the full comparison test.