The Mercedes-AMG GT R has just become Formula 1’s most powerful Safety Car of all time. With its 585 horsepower, the GT R is able to hit a top speed of 318 km/h. The Official FIA F1 Safety Car will make its debut on Sunday, at the Australian Grand Prix.

It is going to be a busy 2018 for the Mercedes-AMG GT R, as it will need to cover 20 race weekends. Developed in the “Green Hell” of Nurburgring and already driven, since day one, by the three-time world champion Lewis Hamilton, the Mercedes-AMG GT R is set to safely lead the Formula 1 field around the track when deployed in bad weather or in case of accidents. 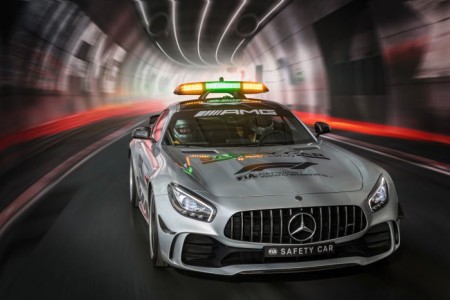 The most experienced Safety Car driver, Bernd Maylander, will be behind the steering wheel of the AMG. “I am very much looking forward to my new company car. It is an absolute highlight in terms of driving dynamics and is one level higher up still than the AMG GT S of recent years”, says Maylander, who only missed a race in his 18-season career as a Safety Car driver.

Never before has Mercedes-AMG packed so much motorsport technology into a production vehicle as in the GT R, that benefits from the presence of the 4.0-liter V8 biturbo engine with especially designed chassis, sophisticated active aerodynamics and intelligent lightweight construction. From this moment on, the usual leader of the pack, Lewis Hamilton, will probably have no reasons to complain, as the Safety Car with motorsport DNA runs from 0 to 100 km/h in just 3.6 seconds. 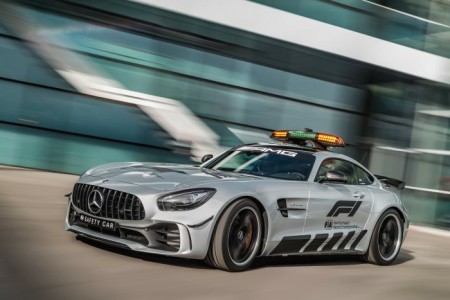 The car got a track specific transformation. It has been equipped with an AMG Track Package with roll-over protection system and ceramic high-performance compound braking system. The looks of the Safety Car is slightly different from that of the production car. There is a light bar on the roof, fitted on a carbon-fiber air scoop designed to optimize air flow towards the rear aerofoil. On-board, there are two displays, the one on the left side providing the international TV broadcast, while the one on the right featuring either an animated display of the current position of the vehicles or showing the current lap times. An InCar Hotspot with WLAN wireless network provides the data management for the visual communication solutions. 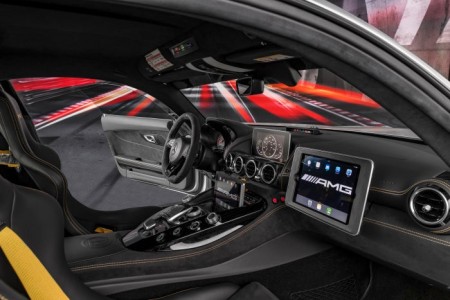 On the emergency stand, the Mercedes-AMG GT R will be accompanied by the Mercedes-AMG C 63 S Estate, with 510 horsepower, that plays the part of the Official FIA F1 Medical Car, with up to three doctors on-board. A 490-liter boot accommodates the emergency equipment, including a defibrillator and a respirator.

The Mercedes-AMG C 63 S Estate and the Mercedes-AMG GT R start on the first lap, ready to cut in if an incident occurs. During the race, both of them are lined up in the pits lane. 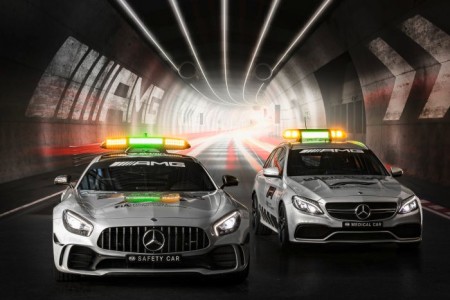 Mercedes-AMG has been supplying motorsports with Pace Cars since 1996. Here are the official FIA Formula 1 Safety Cars provided by the Affalterbach-based car maker.