We bet you never saw this coming! Unexpectedly, the Mercedes-AMG GT S soldier dressed in military camouflage to go to war. War of the super cars, that is.

Since the very first moment we laid eyes on this car, at its launch at the Parisian Auto Show back in September 2014, we have always thought of the Mercedes-AMG GT S as a racer. Not for a single moment did it come it our mind that this might actually be a soldier. But now, it goes out into the world covered in military camouflage. 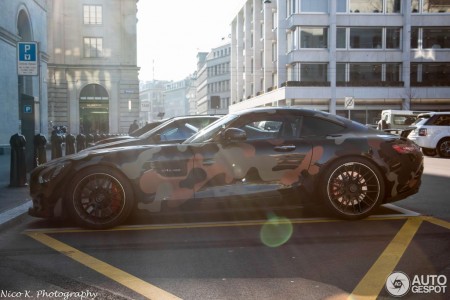 The disguise is quite unlikely to be useful, as the camo-beast was spotted in Zurich, a city that, as far as we know, is pretty peaceful and hopefully it stays that way!

But don’t panic, this look is not permanent, it is just a wrap that can easily be peeled off. But we can’t say the same about the standard diamond grille and the star logo that have been blacked-out. Matte black wheels and an aero kit to match round up the looks of the GT amateur fighter-professional racer.

No information on the power, so if it did not go through any upgrade procedure, the military speedster is propelled by the already famous 4.0-liter V8 biturbo, developing 510 HP and running the distance from a standstill to 100 km/h in 3.9 seconds on its way to its top speed of 310 km/h. Those are figures worthy of a war hero indeed.