One collector has really rejoiced. An almost brand-new Mercedes-AMG GT Black Series went under the hammer in Las Vegas and the final amount of money was not far from half a million dollars.

The model was, for a while, the most powerful street-legal car in the company’s lineup. Then Mercedes released the wild Mercedes-AMG GT 63 S E Performance and the much-awaited and controversial One hypercar and the ranking shuffled.

The GT Black Series comes with the 4.0-liter biturbo V8 with 730 PS (720 HP) and 800 Nm (590 lb-ft) of torque. A seven-speed dual-clutch semi-automatic transmission with SpeedShift MCT manual shift mode manages all the resources from the power plant. 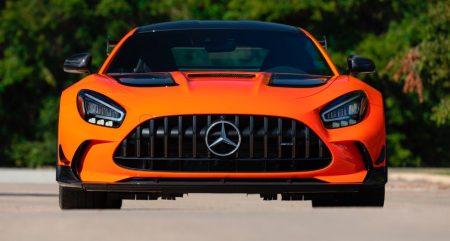 And packed with all these abilities, a Mercedes-AMG GT Black Series was auctioned by Mecum in Las Vegas. The lucky one who takes it home will have to transfer $462,000 to the bank accounts of the auction house following his bid in Nevada.

His new GT Black Series displays the Magnabeam Orange paintwork. There are Black Exclusive Nappa leather and Dinamica microfiber on board, with contrasting Orange stitching. 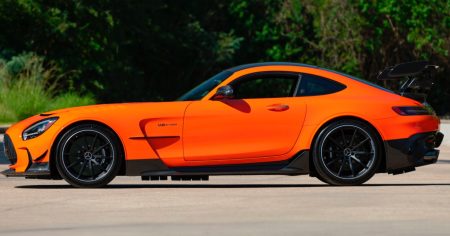 The model runs on ten-spoke AMG Black Series forged wheels, 19-inch at the front and 20-inch at the rear, in Michelin Pilot Sport tires.

What is interesting about this almost brand-new model is that it has only covered 197 miles (318 kilometers) on the road or racetrack so far. And that is so close to the factory condition it drove in one year ago. So the new owner pretty much got himself a garage queen. Hopefully that will change. It is one of the 1,700 units that have ever rolled off the assembly line.