The Mercedes-AMG GT 63 S 4MATIC+ 4-Door Coupe has just left the Porsche Panamera behind following a Nurburgring performance. The new record comes three months after the facelifted Panamera Turbo crowned itself as the fastest executive car at the famous racetrack.

It was August 2020 when Porsche announced that its updated Panamera turned out to be the fastest executive car. It then lapped the Nurbrugring Nordschleife in 7 minutes and 29.81 seconds.

These were figures that the Mercedes-AMG GT 63 S 4MATIC+ 4-Door Coupe could not accept. Instead of just sitting and watching the Porsche wear its crown, the AMG GT got down to business. 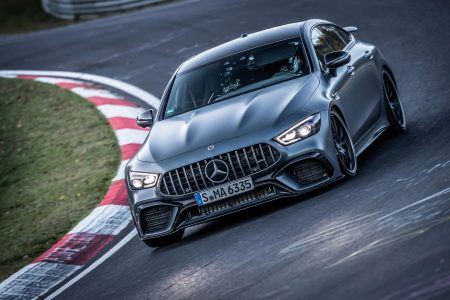 Three months later, it broke the record with two officially measured and notary-certified times. It took the Mercedes 7 minutes and 23.009 seconds and 7 minutes and 27.800 seconds, respectively. The times are both faster than what the Panamera Turbo achieved. Therefore, the AMG GT 4-Door Coupe is now the fastest luxury class vehicle on the Nordschleife.

Development engineer Demian Schaffert was behind the steering wheel of the luxury sporty automobile made in Affalterbach.

“Even though I have been accompanying our GT 63 through its development for several years now it is always impressive to see the wide spread we have been able to achieve with this exclusive vehicle”, Shaffert concluded.

Why did the Mercedes-AMG GT 63 S 4MATIC+ 4-Door Coupe get two different times?

The answer to the question is simple. In order to compare the performance with those achieved by older cars, Mercedes also records the time on the shorter version of the Nurburgring. That used to be of 20.6 kilometers. The current one is 232 meters longer, getting to 20.832 kilometers.

Mercedes sent a completely standard variant on the tarmac of the winding tarmac of Nurburgring. But the twin-turbo 4.0-liter V8 engine is not exactly one to ignore when it comes to speed. It develops 639 horsepower and 900 Nm of torque. The power unit transfers its resources to both axles via the all-wheel drive 4MATIC+ system and via a nine-speed automatic gearbox.

At the Nurburgring, the AMG wore the Michelin Pilot Sport Cup2 tires, plus an optional aerodynamic package to optimize the air flow along the straights and provide the car with the necessary downforce.