Mercedes-AMG GT 4 Concept, the long-rumored four-door AMG GT is here. FOUR-DOOR MERCEDES-AMG GT? Yes, the family’s supercar is coming next week at the Geneva motor show, in concept form. And we have the first teaser pic.

The car will be called ‘AMG GT 4’, and that is no coincidence. A practical alternative to the AMG GT theme, the new Mercedes-AMG GT4 will mix the coupe’s aggressive styling with the four-door format of the larger and less sporty CLS. The long nose of the two-door sports car is difficult to combine with rear doors, so a brand-new side-profile styling is likely to be featured.

Under the hood, no surprises, with AMG’s own 4.0-litre bi-turbo V8 doing its job in 600 hp plus form, possibly in the same 612 hp power output of the latest Mercedes-AMG E 63 S.

The car that will make its appearance in Geneva is still a concept car that serves as a strong prelude to the production GT4. The production version is said to come to the showrooms as early as 2018.

The 600-horsepower super sedan would be the third distinct product that is fully developed by Mercedes’ sporty division and sub-brand Mercedes-AMG, joining the AMG GT Coupe and Roadster in the current line-up. 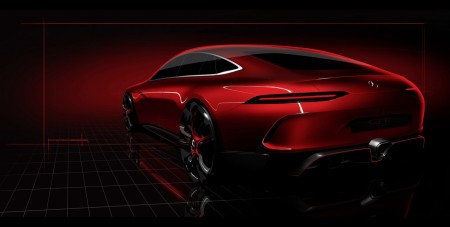