A brand-new species is rising: the SUV Coupé-s. And at least by their allure, if not by weight, the sporty variants also make sense. Two flagships of the new class join the duel of our test: the BMW X4 M40i and the Mercedes-AMG GLC 43.
Photos: Bogdan Paraschiv

Back in 2008, BMW fired the idea of the SUV-Coupé with the X6, followed by the X4 in 2014. Mercedes rejoined relatively late with the GLE Coupé, in 2015, instantly followed, one year later, by the GLC Coupé. Both brands swiftly developed the sporty variants of the X4 and of the GLC Coupé. To avoid confusion, we must explain the exact positioning of the two models a little bit. The X4 M40i is part of BMW’s so-called MPerformance, meaning that it finds its place right between the standard model range and the M models. Two years ago, Mercedes attempted to imitate the intermediary range concept between the company’s standard models and the AMGs, thus naming it AMG Performance. But just one year later, Mercedes dropped the intermediate range with no official explanation, insiders from Mercedes explaining to us that this additional demixing brought confusion among customers. The AMG Performance range had made its debut with the very C-Class sedan in the 43 AMG variant, featuring the exact same engine found under the bonnet of the GLC 43 AMG in our test. Therefore, the Mercedes-AMG GLC 43 would have been initially framed in the AMG Performance intermediate range, but now it stands as a 100% AMG model. Still, there is one more AMG version positioned higher than this, designated as the GLC 63 AMG, while the X4 features no stronger genuine M in the current generation. 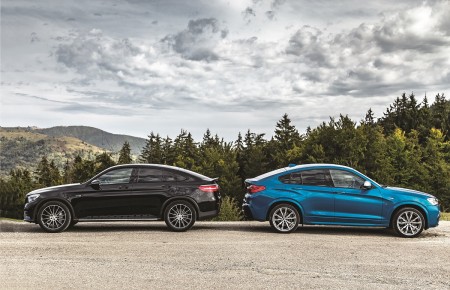 Both models are propelled by 6-cylinder engines, in-line in the BMW and in a V layout in the Mercedes. The power unit of the X4 is similar to that of the M2, but different from that of the M3/M4. Apart from the M3/M4, the engine of the X4 M40i (code-named N55B30T0) has been derived from the 306-horsepower unit of the X4 xDrive 35i and features a single turbocharger instead of the two of the M3/M4, yet using the same forged crankshaft as in the M3/M4. Of course, the Double Vanos intake and exhaust variable distribution and the flaps-free Valvetronic system are there. Still, in this case, it does not mean it is for the better. The bigger-sized turbocharger holds somewhat of a turbo-lag and the BMW engine is not as responsive as that in the Mercedes, that benefits from the presence of two smaller turbochargers, mounted each on a 3-cylinder line.

Thus, regardless of the driving mode, either Comfort or Sport, the Mercedes engine responds more rapidly and in the Sport+ mode, the push of the throttle determines an instant response. The turbo lag can be sensed in the BMW not only when starting from a standstill, but also when accelerating, for example, from 3,000 rpm, despite the excellent automatic Steptronic Sport gearbox. The all-new 9-speed automatic gearbox of the Mercedes is exquisite, thoroughly adapted by AMG for the sporty demands and which, in the Sport, Sport+ and Manual modes (the Manual Mode shall be engaged by a button in the center console) shifts even quicker.

A fierce battle is on, in terms of engine tones. A baritonal sound is dominant in the BMW, accompanied by rumbles as in the endurance sports cars when switching into the Sport+ mode, but the sound brings no drama, nor crescendo that used to bewitch our ears in the last of the aspirated 6-inline M3s. Such is the sound in the Mercedes, even though we are talking about a biturbo: a sharper sound when in crescendo, that enchants even when in the Comfort mode. The people at Mercedes have granted more attention to the artistry. Is therefore Mercedes the new sporty benchmark? Not, because in terms of agility, the BMW keeps its crown. For BMW, the sporty character is some kind of a constitution and nothing has ever deviated the Bavarians from their creed. 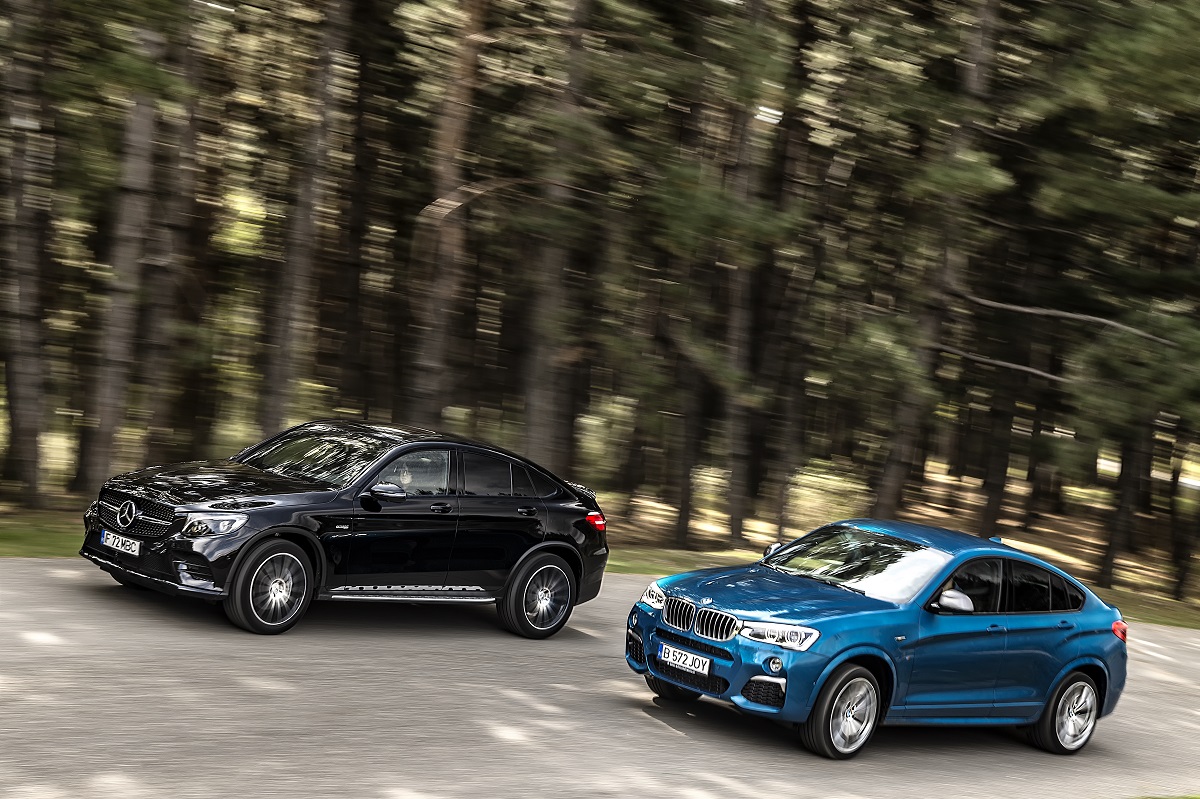 In the Sport or Sport+ mode, the X4 leans less than the GLC in corners or, better said, does not lean at all. The adaptive suspension of the BMW is like in a kart in the Sport+ mode, while, in the Mercedes, with all adaptations carried out by AMG on the pneumatic suspension, in the Sport+ mode, it is more permissive and generates a slight body roll. The steering of the X4 also determines more force in the steering wheel in the Sport+ mode and it feels more engaged. When driven to the limit, the BMW holds an almost surgical trajectory precision, slightly superior to that of the Mercedes. The mass distribution inching close to perfection also brings its contribution to this, as it is of 51/49% in the BMW, compared to the 55/45% of the Mercedes. Even though the Mercedes is 60 kilograms lighter and benefits from an extra 55-Nm torque, the getaways are not significantly more rapid, with only a slight difference. The BMW thus holds its crown as the king of sportiness, despite its less spontaneous engine than that of the Mercedes and the 11-centimeter higher driving position.

A BMW executive has detailed for me that the higher driving position is a demand of the SUVs’ customers, yet a higher position is not necessarily a sportier one. In the Comfort mode, the X4 also provides more comfort, but the Mercedes is also a bit better at it as well. The ride comfort of the Mercedes-AMG GLC 43 is purely phenomenal and the pneumatic suspension goes a long way for it. There must be mentioned that both models were wearing the optional 20-inch wheels shod with similar tires (the standard wheels has 19 inches). In terms of efficiency, the BMW is better, with the real fuel consumption of 1l/100 km lower.

GLC Coupé seems to be more spacious inside, but the measurements reveal quite tiny differences. With a longer wheelbase, the GLC Coupé provides a little more kneeroom at the rear. The Mercedes comes with a 15-milimeter advantage in terms of headroom, but a question arises: what is it that you want? A more beautiful car or 15 extra millimeters for the head at the rear? The X4 features a classical Coupé silhouette with a dropping tonneau that seemingly extends the roof and descends abruptly to the rear. For this only, the headroom is a bit smaller. 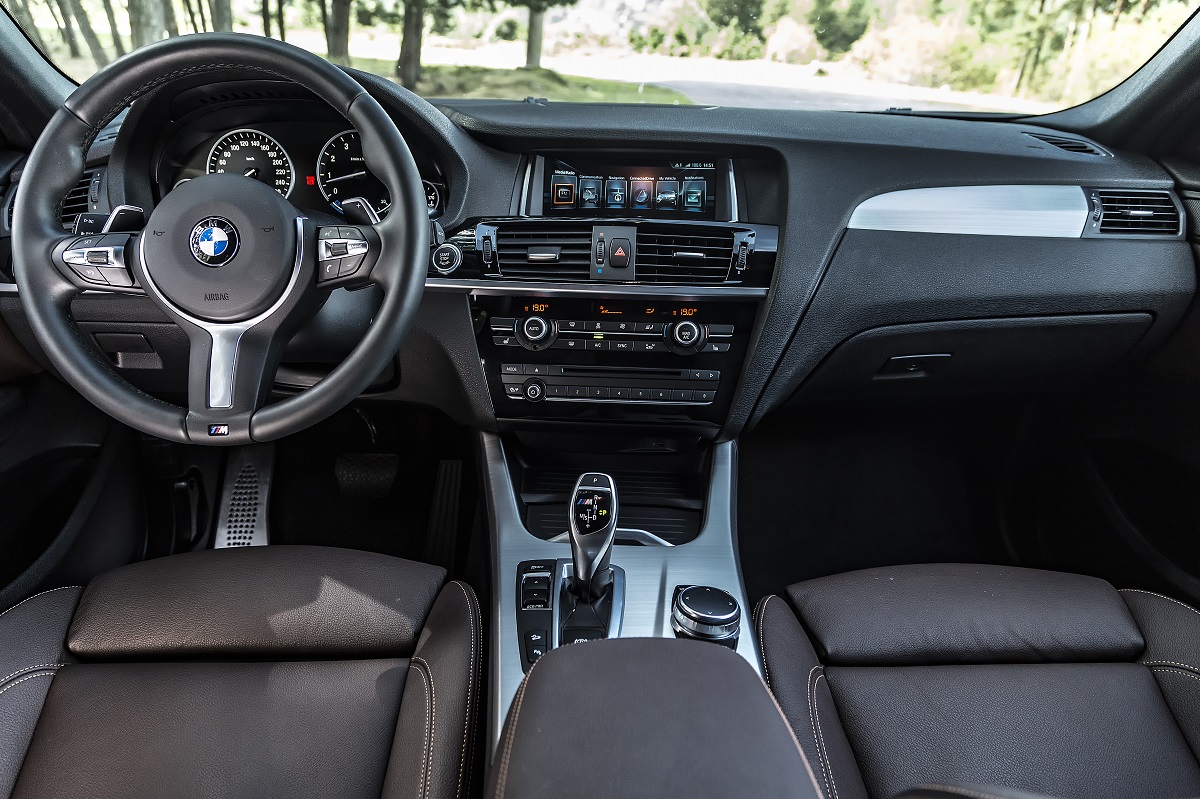 In the Mercedes, the tonneau is more vertical and the roof does not plummet the same. Subjectively speaking, the BMW comes with a prettier side line, especially because the rear glass harmoniously continues with the prominent aileron coming out of the body and not additionally mounted as in the AMG variant of the GLC Coupé. Instead, the Mercedes is more elegant inside, yet our feeling was not influenced only by the leather-covered dashboard like in the test car. The GLC 43 AMG provides a more refined interior ambiance in which the matte wood, the upholstery red stitching, the leather and alcantara seats and the more varied customizing possibilities make it more desirable. Yet the iDrive infotainment system of BMW, recently updated with the new software used in the 5- and the 7-Series is obviously superior in terms of both menu organizing and operation. 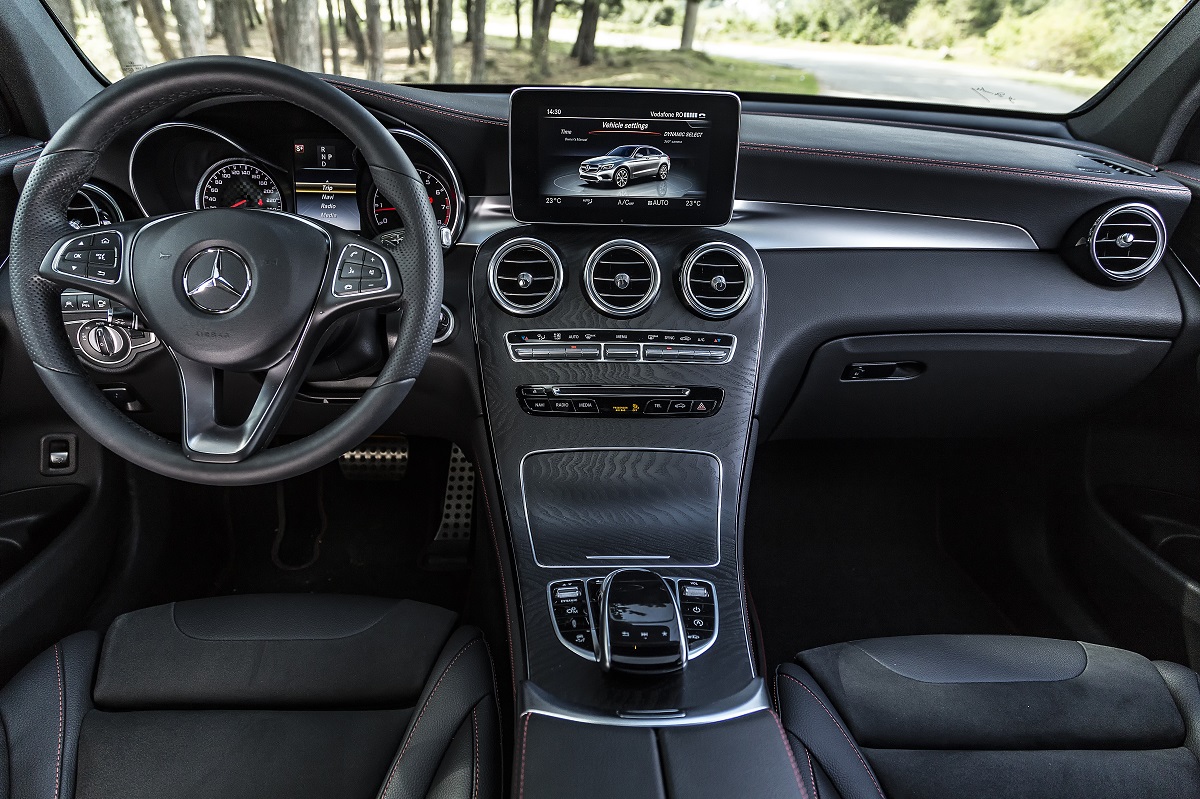 Mercedes highlights practical values and provides a slightly bigger boot in the standard version, with possibility of lowering the ground clearance by the push of a button in the trunk for loading heavy items. Such a pity though that you need to pay extra for the electric tailgate, which is offered as standard in the BMW. 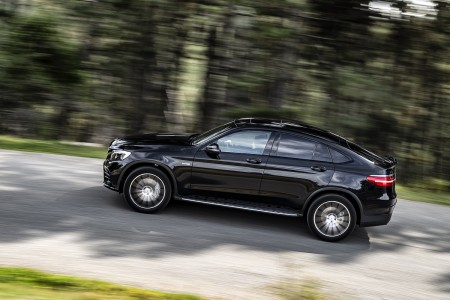 An excellent allrounder, with a superbly designed and spacious interior, unparalleled ride comfort and an enthusiastically responding biturbo engine. Not quite as sporty as the X4, it features a lower fuel consumption figure. It is cheaper than BMW. 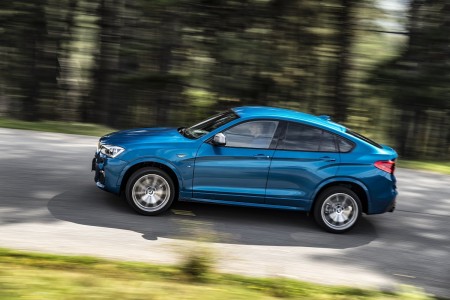 It is sharp and agile as a classical coupé, with a roll motion inching closer to zero, but not compromising on comfort. It features a splendid design and a very efficient engine, but not as quick-responding as the iconic aspirated M engines, that used to delight us in the good old times. 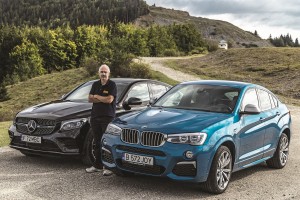 Apart from the titanic GLE 63 AMG or X6 M, the Mercedes-AMG GLC 43 and the BMW X4 M40i are lighter, more agile and practice more sport, the sporty SUV-Coupé concept making more sense in this segment. Things have not deviated too much from the historical tradition of the two brands: the BMW is the more agile and sharper model, as the Mercedes stands as the more comfortable, but things are not so clearly set out as in the old times, because the BMW gained a lot in terms of comfort, while the Mercedes gained in terms of sporty character. A single thing is different from what we used to know. The Mercedes features a more spontaneously-responding engine than the BMW.