The Mercedes-AMG G 63 went “Blue (Da Ba Dee)” in the hands of the Mansory experts. They came up with this smurf-blue boxy off-roader. This is probably the password to get the vehicle up and running in the posh celebrity-like style.

And it’s not just the China Blue shade that changes the face of the G 63. Not by far. Mansory fitted that brick-like shaped model with a wide body kit. This is how it ended up sporting a carbon fiber hood with a scoop and fender flares both at the front and rear. They’re not necessary, as there was already plenty of room for the Y-spoke alloys. But they give the sports offroader a more intimidating look. Carbon fiber air vents are sheltered by them on each side, behind both axles. 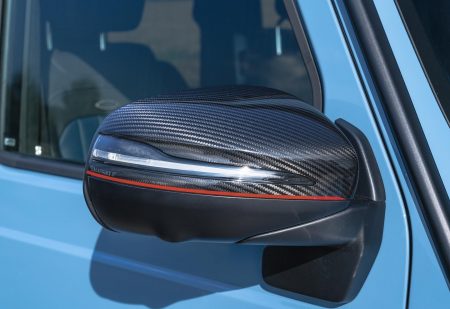 There are LED lights at the front end of the roof, right above the windshield. And a carbon-fiber wing showed up at the opposite end. Mansory replaced the stock case of the spare wheel at the rear with a bespoke one with the company’s name on it. And going back front, they chose to ditch the three-point star logo and replace it with their very own. Isn’t that what all tuning houses do? Their name also appears on the mirror cases in carbon fiber.

Mansory must have left the engine upgrades for later, since they didn’t mention any. Therefore, the Mercedes-AMG G 63 in China Blue comes with the stock 4.0-liter twin-turbo V8 with 585 PS (577 HP) and 850 Nm (627 lb-ft) of torque. All these go straight to both axles and make the sports offroader flash from zero to hero (0-100 km/h or 0-62 mph) in 4.5 seconds. With the pedal to the metal, without aerodynamics fighting against this brick-shaped vehicle, and if the driver ticks the AMG Driver’s Package when ordering the model, it goes all the way to 240 km/h (150 mph). 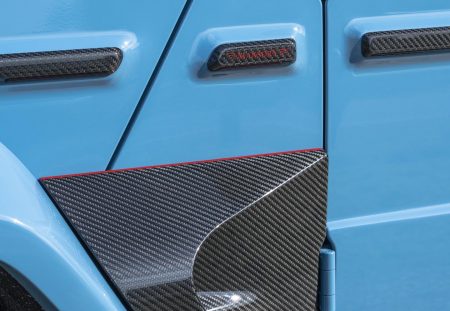