Mercedes gave no hint concerning an AMG Black Series version of the EQS. Yet the electric luxury saloon sparked the imagination of the designers. So how would it look exactly?

The new Mercedes-EQS is the car to beat for the competitors that build electric luxury models. But performance enthusiasts seem to want a bit more. A designer already drew the Mercedes-AMG EQS Black Series. It is the model that the car maker never spoke a word of.

Aksyonov Nikita proposes an aggressive front end. He restyled the front bumper and put up a more muscular bonnet. He also redesigned the fenders, in order to make the car more similar to what the Mercedes-AMG GT Black Series displays. 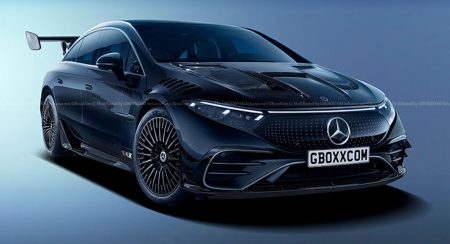 A huge wing on the boot lid would surely enhance the downforce and surely would make a big impression at the rear. The rear bumper features a new look. A metal trim under the reflectors reminds us that we’re dealing with an elegant high-performance sedan though.

The model gets a smart black finish. The digital designer made no changes on the wheels, so these are the same that the EQS uses.

Therefore, the fans of the brand will have to settle for the 730 horsepower and 800 Nm of the car revealed last July. A seven-speed AMG SPEEDSHIFT DCT 7G dual clutch transmission transfers the resources to the rear axle.