The new inline-six units will debut early 2017 on the updated S-Class and eventually make their way under the bonnet of other Mercedes models. The E 50 Coupe 4Matic will become the first Mercedes-AMG model to use these units. All-wheel-drive will be standard.

The M256 engine has 2,999 cc and combines a conventional turbo with an electrically driven compressor and a 48V electrical system. In standard guise, power is rated at 408 hp and 500 Nm (versus 2,996 cc and 333 hp for the old M276 V6), but the Mercedes-AMG E 50 Coupe will feature a series of tweaks meant to take the total output above 450 hp. These include higher boost pressure and internal modifications.

The main innovation is the 48V electrical system. The Integrated Starter-Alternator (ISG) and electric auxiliary compressor (eZV) combine to produce a power boost that negates turbo lag, while the system also serves the classic roles of powering the water pump and air-conditioning compressor. The 48V ISG is also responsible for hybrid functions such as boost (up to 15 kW), energy recovery, coasting and shifting of the load point – the engine can be operated in a more favourable area of the engine map; load increase/reduction depending on the state of charge of the battery. 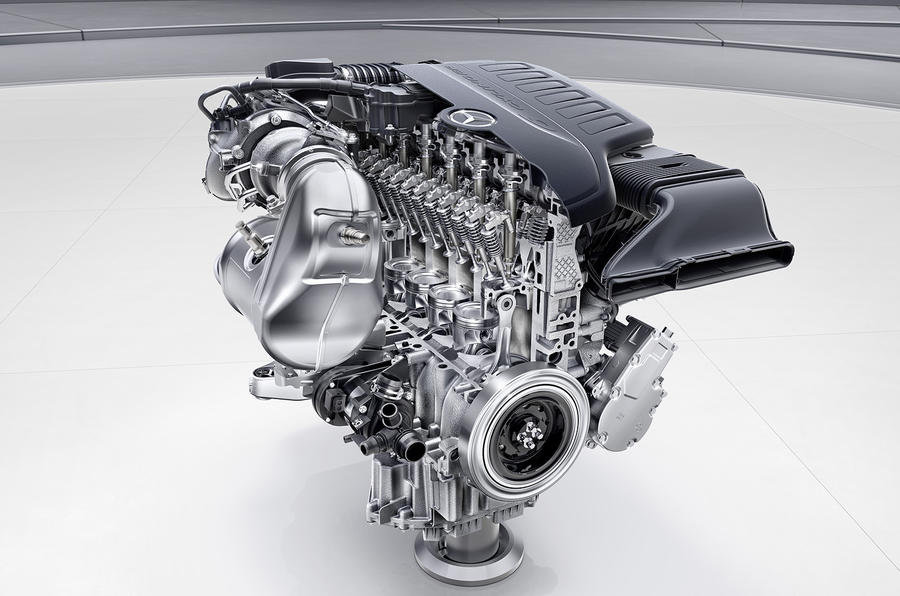 Packaging has a lot gain from the new inline configuration too. The engine is shorter due to the absence of a belt drive so Mercedes freed more space for ancillary components on either side of the new inline six cylinder unit. Its performance is also as dynamic as that of a V8, as the new six-cylinder in-line engine comes with an especially intelligent form of turbocharging: assisted by the ISG at start-off, the electric auxiliary compressor (eZV) guarantees immediate high torque when driving off and accelerating, bridging the time before the large exhaust turbocharger cuts in. The electric turbocharger accelerates to 70,000 rpm within 300 milliseconds, ensuring an extremely spontaneous reaction from the engine.

Another trick used by Mercedes is the first-ever particulate filter to be mounted on a series gasoline engine. It traps soot particles and it will be gradually appear on all future engines, beyond the all-new M256 inline-six cylinder.

The Mercedes-AMG E 50 Coupe will slot above the future Mercedes-AMG E 43. In the sedan, the E 43 offers 401 hp, courtesy of the older 3.0-liter V6 engine, but it is not yet known if for the all-new E-Class Coupe Mercedes will instead use a de-tuned version of the new inline-six engine.

READ EVERYTHING ABOUT THE NEW E-CLASS COUPE HERE