Mercedes-AMG C 63 is out on the streets, claiming the super-saloon crown. Can it beat the BMW M3 and Vauhxhall’s lesser known VXR8 GTS monster? AUTOCAR has the answer.

In super-saloons land, power and pace rule. Mercedes-AMG has always understood that, and by bringing its new C63 S saloon to the market with no less than 503bhp, it has provided a fine head start for the car.

But how does it measure against the 425bhp BMW M3 and one unexpected rival in the shape of 577bhp Vauxhall’s 577bhp VXR8 GTS – the heaviest contender here, but a car that offers 15% more grunt than the AMG. 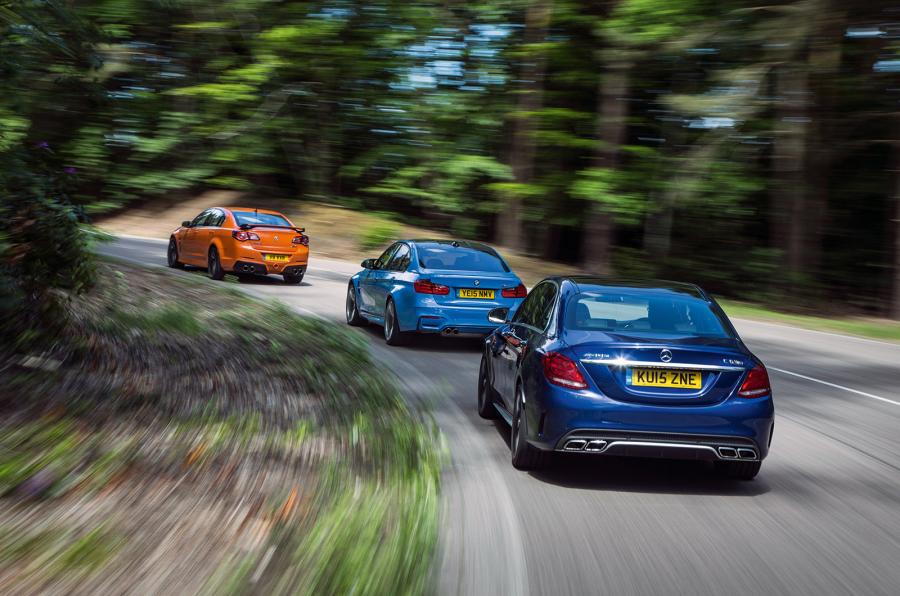 C 63, M3, VXR8, all feature the classic longways engine driving the rear wheels, are made predominantly of steel and feature independent suspension via coil springs and adaptive dampers.

In the engine department things get a bit more interesting and… contrasting with the VXR8’s deliciously anachronistic 6.2-litre Chevrolet small-block V8 with rocker-arm induction and a supercharger fighting off the young wolfs – M3’s ultra-modern, 140bhp-per-litre 3.0-litre straight six, with its pair of parallel twin-scroll turbochargers and the C63’s new 4.0-litre V8 mechanical allure coupled with a downsized capacity and twin turbos.

So much for promises. Let’s see how the three amigos drive. In the Mercedes, select Race mode on the main dynamic selector and Sport Handling on the stability control. In the Vauxhall, you tweak a snooker-ball-sized knob on the centre console clockwise, from Sport mode, through Performance mode, to Track mode. In the BMW, there are several buttons to press and modes to cycle through. You want Sport+ for damping, steering and engine, the most aggressive of three settings for the gearbox and a long press of the stability control button to deactivate the ESP. 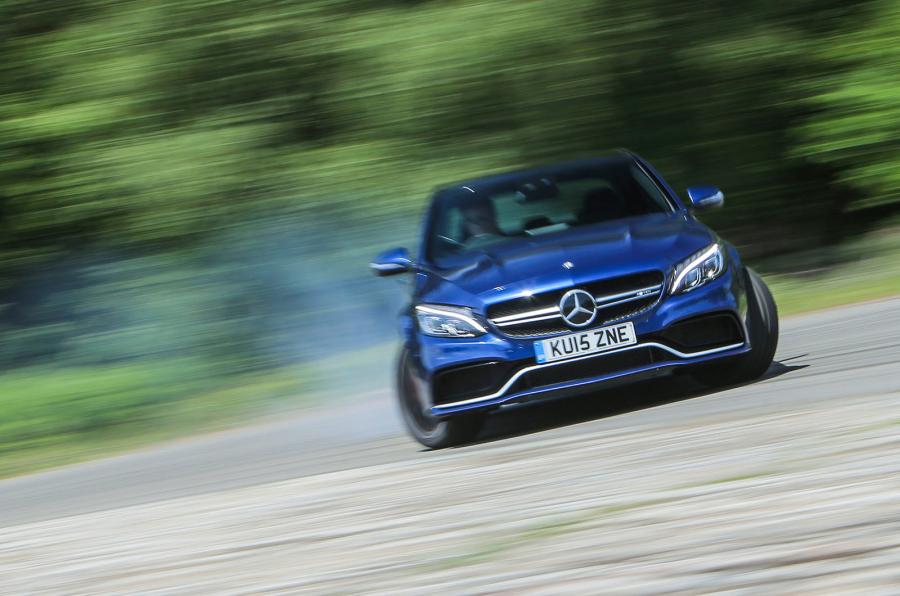 The C63 S is the fastest-accelerating car here by a fairly wide margin over the VXR8, at first only by a smidgen over the M3 but more once it hits third gear and homes in on 100mph. In real-world motoring, the BMW makes up for it with cleaner engine and transmission responses, so the AMG’s advantage isn’t decisive. But it’s there; you can feel it from the driver’s seat, see it in the numbers. And it counts. The VXR8’s disadvantage is the most surprising thing. It’s half a second off the pace by 60mph, a second behind by 100mph and more than twice as far adrift by 150mph. 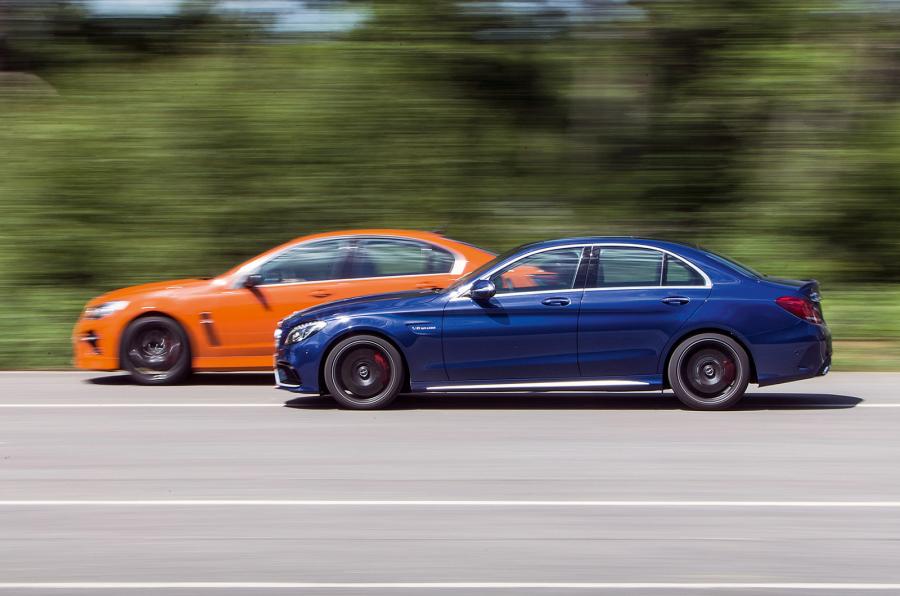 On ride and handling, the BMW comes into its own. You’d expect it to, but perhaps not quite to define its accomplishment exactly as it does. The M3 has a dynamic repertoire of astonishing breadth. It rides gently in Comfort mode, only to transform into the grippiest and most direct car here when you delve deep into its handling abilities. It’s a natural athlete that conducts itself every bit as keenly as its flared arches and huge, dished alloys hint that it will.

Drive the Vauxhall just as hard and you’ll be disappointed by several things: its lack of first-order pace, the lightness of its steering under load, the softness of its directional responses and the way in which harsher surfaces trouble the structural integrity of its body and cabin. So you ease off to a speed at which you can savour that throwback muscle-car character. 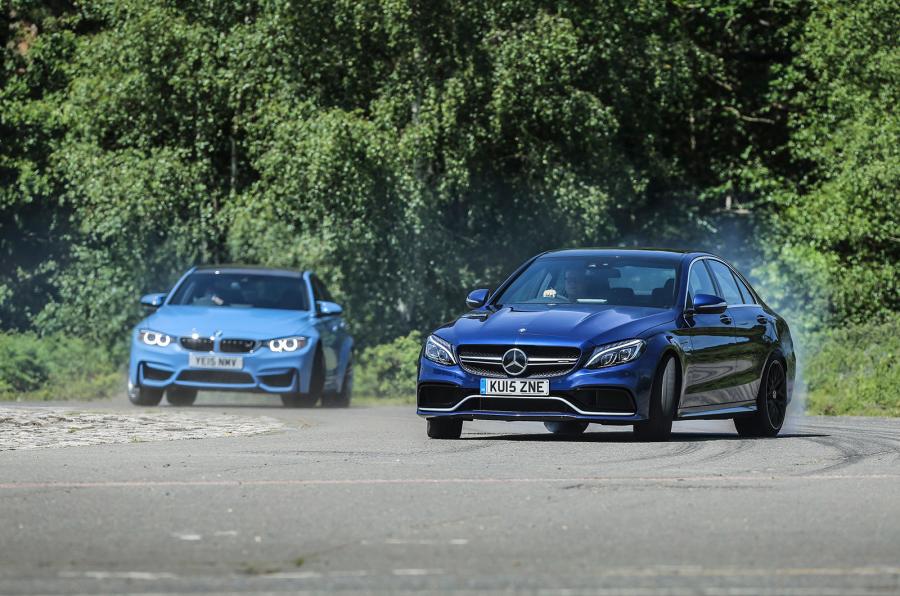 But what BMW forgets, somewhere along the way, is to flatter and engage you, or to make everyday, normal-speed motoring as flavoursome and exciting as the C63 does. Where the M3’s steering wheel is weighty but muted, the C63’s is tactile and encouraging. The AMG will respond with a languid shake of its hips, a flare of revs, a flurry of wheelspin and benign, playful, low-speed slide when the moment presents.

Add to that its sizeable lead over the Vauxhall on desirability and a modest one over the BMW on the same front and you have to conclude that the C63 is the car with which you’d want to live.