Mercedes-AMG A45 S 4MATIC+ faster than the Lamborghini Murcielago

The Mercedes-AMG A 45 S 4MATIC+ is the compact car with the most potent 4-cylinder engine that ever made it under the bonnet of a series production model. The car revealed last year was now taken to the famous Nurburgring. Those who saw the time indicated by the stopwatch were speechless.

With such figures, the hot hatch ran around the Nurburgring. Wearing Pirelli P Zero Trofeo R high-performane tires, the AMG lapped the famous circuit in 7 minutes and 48.8 seconds, which makes it 1.2 seconds faster than the Lamborghini Murcielago supercar. “The stopwatch never lies”, pro drivers say. 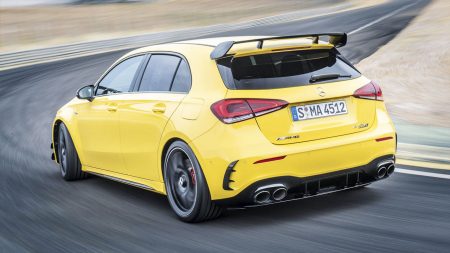 This time sets the hot hatch right above renowned high-performance models, such as the Porsche Carrera S, the BMW M3 CSL E46 and the Aston Martin Vantage GT8, that ran the same distance in 7 minutes and 50 seconds. Ranked a bit lower are the electric variant of the gullwing Mercedes-Benz SLS AMG or the Alfa Romeo Stelvio QV, the Lamborghini Gallardo LP560-4 or the Ford GT.

The son fights his father: new Mercedes-AMG A 45 S versus the old one

Above the starred model from Mercedes-AMG, 8 tenths of a second ahead, there are the BMW M3 GTS and the Audi TT RS Coupe.