The Mercedes ambulance – Winning the race against time

It is the best or nothing for the patients from the English South East Coast. The ambulance service has recently purchased Mercedes-Benz vehicles to serve in emergency critical cases.

The South East Coast Ambulance Service counts on Mercedes-Benz vans to get to their patients in time and to provide them the best care possible. The service has a fleet of 300 emergency vehicles, based on the 5-tonne Sprinter chassis.

They have been recently supplied with additional vehicles for their missions: 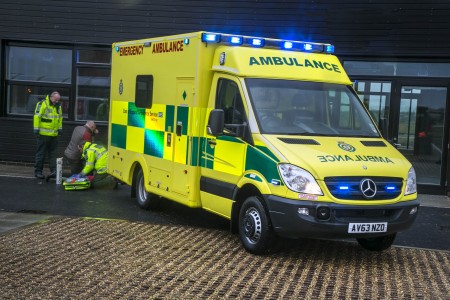 Since all the ambulance rides are nothing but tight races against time, the head of fleet operations for the South East Coast ambulance service, Justin Wand, explains why Mercedes-Benz models were the vehicles of choice to run from one emergency case to the next one: “While acknowledging the need for vehicles of different sizes, we also wanted to standardize on a consistent, reliable platform. Mercedes-Benz was the obvious partner. We already know that taking accounts of factors such as fuel economy, reliability and maintenance, the Mercedes-Benz products represent better value than those of its competitors.”