We are still overwhelmed with what Mercedes has achieved more than five decades ago. Ladies and Gentlemen: The Mercedes 600 Pullman Landaulet. Auto motor und sport tests the exclusive version of the 1960s state and dictatorships de facto limousine.

On September 18, 1965, the then 39-year-old Elizabeth Alexandra Mary Windsor, Queen of Great Britain, Ireland and the British dominions beyond the seas, lands in Cologne / Bonn, with Prince Philip and a small court. Including their chamber ladies, Countess of Leicester and Lady Susan Hussey, whose father is known to be the 12th Earl of Waldegrave and Knight of the Garter. In eleven days, the Queen travels through eight federal states.

But the roadtrip it is nice. For the visit of the Queen, Mercedes has manufactured the first Landaulet of the 600 legendary series. 58 more followed, but only one will be exactly like the royal example: this one here. It is the 600 that Mercedes has held in the fleet since 1972 – for given occasions. This includes driving rulers and heroes, kings and plutocrats, pop stars and popes, but hardly for orchestrating a test. This did not stop us to ask again at Mercedes-Benz Classic. 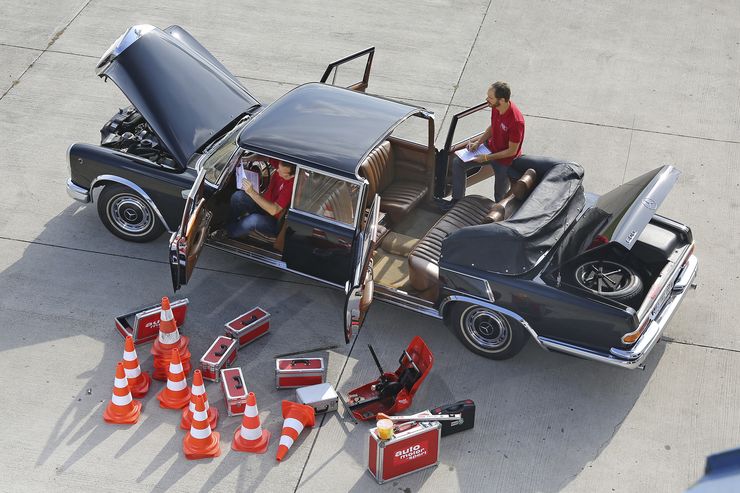 “It’ll be ready by ten on Monday.”

This is not without reverence, since the Landaulet which now stands in front of us is 6.24 meters long, 1.95 wide and insured for over 1.5 million euros.

A car that moves the world
New owners – well, rather their staff – were introduced by Mercedes in a two-day course in the technology of the vehicle. Just to find out about the functional tasks of the comfort hydraulics, half an afternoon can be chatted up. For example, the system which works at 150 bar, resolutely closes windows, sunroof or trunk lid. Or about the air suspension that keeps the car at perfect level. About the two selectable characteristics of Bilstein bumpers. And above all: how to get out of a narrow yard with the Pullman. 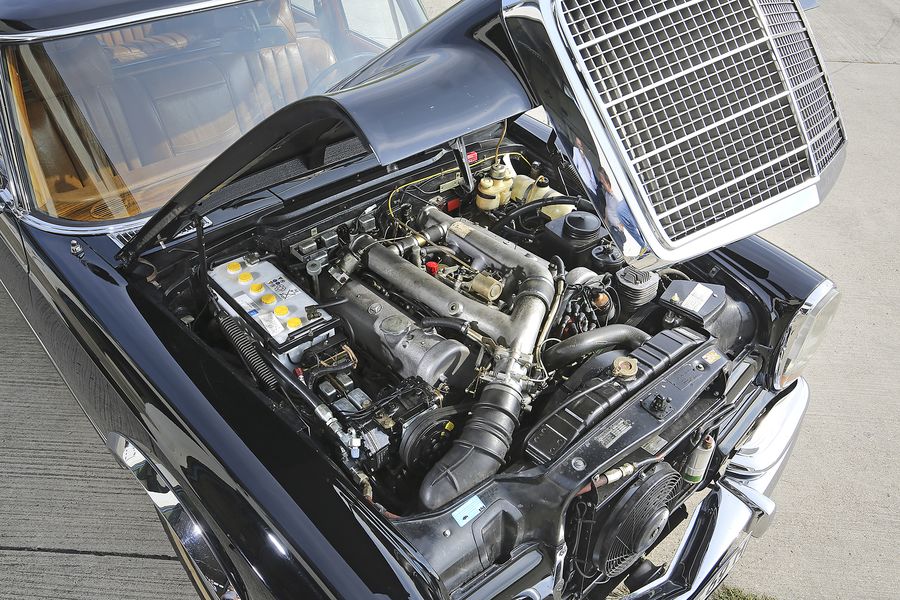 We crank up to the gas station, fill the 112-liter reservoir and start the round of consumption, as if the 600 is a normal test car. It is not. Soon we are quarreling about not meeting the high expectations of our celebrities. Nobody dares to overtake us on the main road. In small towns people look at the Landaulet, in the expectation that their the mayor will give us the Golden Key. Soon we will find ourselves in this majestic journey. If a police patrol stopped us, we assigned the officers a reasonable position in the escort.

In the antechamber of power
The 600 calls for full attention – although it easily drives with overdosed power assistance in the indirect steering and the four-speed automatic with hydraulic multi-plate clutch and relies entirely on the power of the 6.3-liter V8. But there is much to set and use – damper characteristics, telephone, intercom – on the driver’s seat, which can hardly be adjusted because of the partition back. The cockpit is the antechamber of power. There the car is steered, in the rear the course of the world is set. 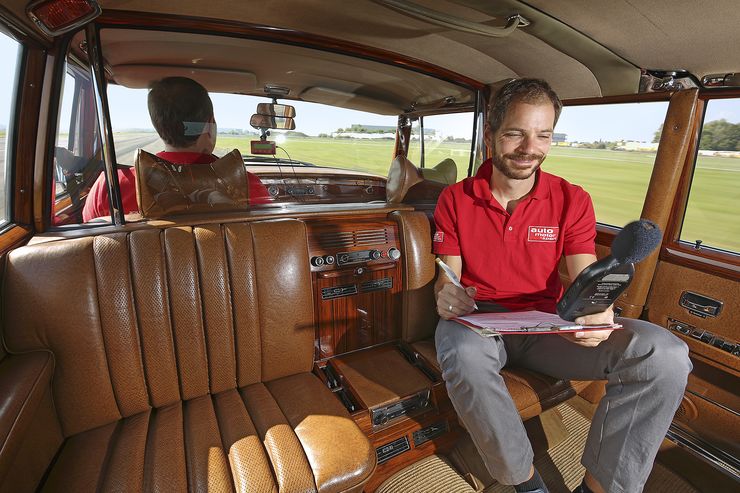 Mercedes invested 100 million marks in the construction of the W 100, which debuted in 1963 at the IAA. This is 37,355 Marks for each of the 2,677 cars built in Hall 32 in the basement of the Sindelfingen Mercedes plant until 1981 – or rather custom-made: According to the sales brochure, “individual wishes could be taken into account”. Those are command from the client’s point of view and executed in perfection. Only those who work at Mercedes for at least 15 years are eligible to participate in the production.

The 600 was a technical sensation back then. And it still is. The suspension overflows even uneven bumps. So the Landaulet flows across the street, sovereign, sublime, quiet and fast. Anyway, we are already at the end of the consumption round. So refuel, bring the 600 back. Overnight it stays with Mercedes, because our underground car park could hardly correspond to the space requirements of the Pullman with reasonable extensibility. 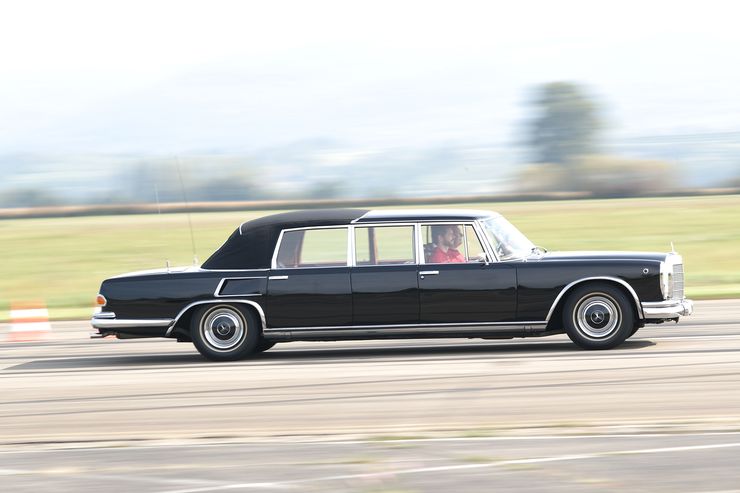 The last veils of the early morning fog waft across the meadows as the Mercedes line appears in Lahr. The 600 comes in the van. First, the Landaulet rolls on the scales, which certifies him at a weight of 2,948 kg. Then we measure the interior. The abundance of space extends to 87 cm standard seat space – enough to accommodate two more passengers on the two back-facing center seats.

Our test procedure is undergoing some changes for the 600. So we measure the noise in the rear. Although the wind gets tangled up in front of the steep roof pillars, in the back noise stays so discreet under the thickly upholstered soft top. And let’s not forget the vastness of the room. 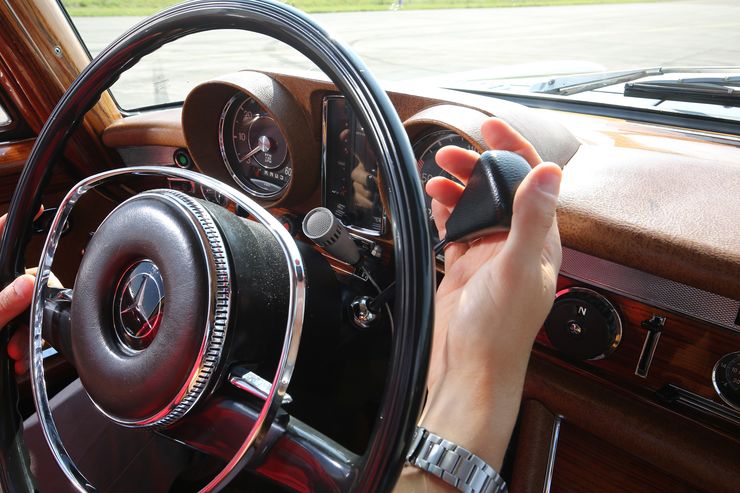 Otto is probably talking a bit ahead, but I can not hear it through the partioning glass, I have switched off the intercom system – wish not to be disturbed. Outside, the heights of the Black Forest pass by. But then the Black Forest stops. Otto opens the door and asks if I would be happy to assist in the fairs. We wire the electronics. Because this Landaulet has the first gearbox geared for parade speed, we should not speed it up hard. But even after a gentle start, the force of the V8 with 250 hp and 500 Nm suffices to lift the three-tonne in 12.9 seconds to 100 km / h.

The delay, in turn, occurs in dignified composure and with gentle overbraking of the rear axle. Although 13 bar of pressure boosts the braking force, there’s little reason to believe that the 600 on the third attempt from 100 km/h might need less than 63.4 feet to stop. So we leave it be and prepare the car for the driving dynamics tests by opening the roof. Later, the Landaulet is still at 46.6 km / h, in the slalom test, then at 84.6 km / h through the double lane change, but first we test him in his best discipline: standing. 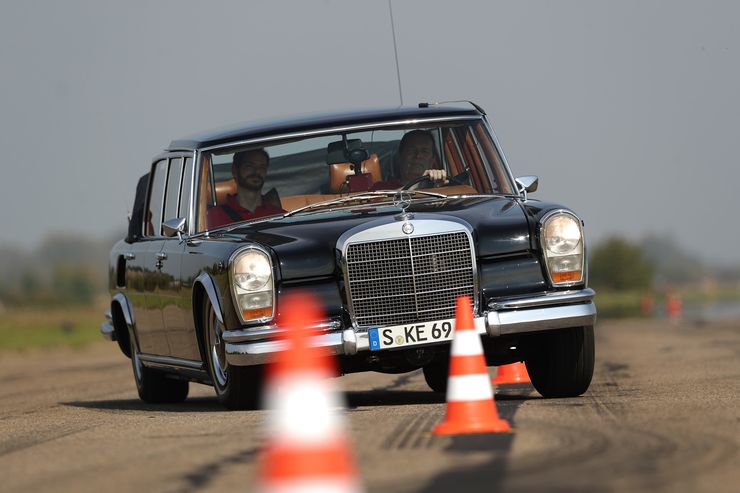 The summer breeze fans gently over the fondterrace, the sun and the view from there even colors the airport of Lahr. At the end of the runway I get up, hold on to the edge of the roof. Down, the asphalt wipes past, deep down I see the star on the hood, which aims at the first pylons. Quite drafty out here, I think, because the 600 makes a dangling to the left, then turn right into the slalom area. Hold on to the left, wave gracefully on the right, balance your legs and smile! Already clear that Elizabeth II never wears her 3.5 kilo crown while parading or she could easily break a jaw when she falls down. How sovereign the 600 is, shows the speed of 38.7 km / h in open, standing slalom. The 600 sets a new record in the history of auto motor und sport.

Less was not to be expected of the most state-powered limousine in the world, which is now loaded back in the Mercedes factory truck. 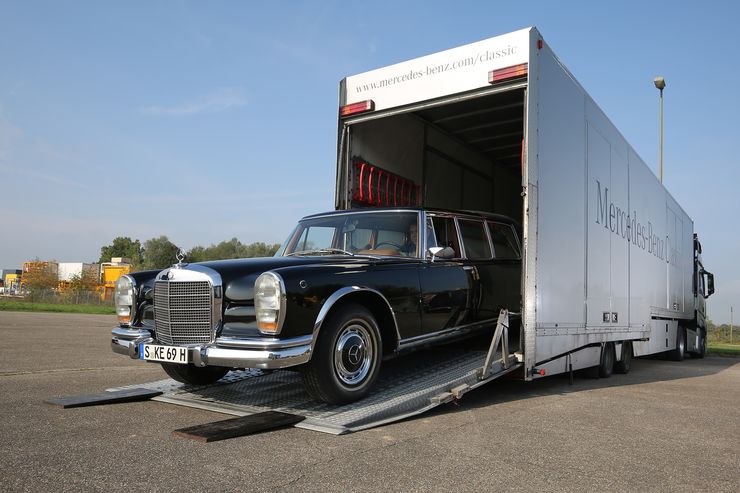 Advantages and disadvantages
Body
Large and prominent like the balcony at Buckingham Palace, but more comfortably furnished with stately luxury. With the soft top open looks great, while the chauffeur sits in front with reasonable submissiveness.
Driving comfort
Fluffy suspension, big leather armchairs, functional stowage options, additional lighting for a healthier complexion. In winter, danger of cold during lengthy parades with the top open.
Engine
The V8, a pillar of power, is coupled to an automatic gearbox set in parade mode.
Driving characteristics
Beyond doubt, sovereign steering, almost easy to handke – for 6.24 m, even at a brisk pace can wave majestically standing in the rear.
Safety
That’s why these gentlemen always take care of the subtly bagged suits, rarely traveling without an escort.
Environment
Consumption lower than government aircraft / military helicopters.
Costs
Can not be so bad if even leading communists like Castro and Ceausescu had the 600. 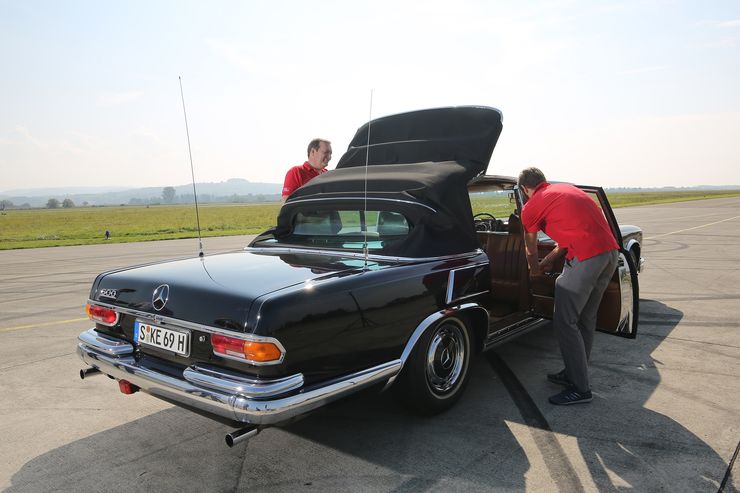