Expect the unexpected, they say: the Mercedes 300 (W 186) came out with the right attitude to conquer the luxury car market in 1951, despite the contemporary limited resources of the German company.

What does this sound like: a supreme top-of-the-range limousine, when there is no real range underneath? Well, probably it should mean: a supreme limousine above all of the automobile kind, no matter the brand. That’s something tricky to pretend, even if you’re Daimler-Benz. In fact, the people who used to work at Daimler-Benz by these difficult times pretended nothing, they just made the car – technically speaking, a top-of-the-range limousine… 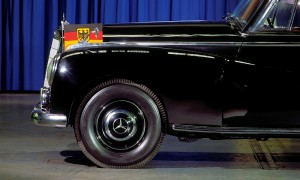 After the end of WW II, the efforts spent by Daimler-Benz in order to resume production were achieved by bringing on the market, in 1946, a new edition of the already known Mercedes 170 (originally launched in 1936). Nothing unusual here. But going straight for the highest level, only few years later, that was pretty daring.

This endeavor is understandable in the light of the words “noblesse oblige”, since Mercedes used to offer high-end luxury limousines before the war.

How about its technical side? Well, it’s rather natural to assemble some exclusive automobiles manually and in small numbers – that’s ok. Filling them with competitive technology, that’s a bit different. And here, the specialists from Daimler-Benz had to squeeze the very best out of the remaining pre-war industrial machinery, spare parts and development opportunities to put together a convincing luxury limousine for the ’50s. 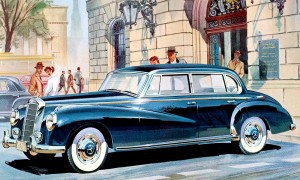 The only engine fabrication line to survive the heavy bombings was meant to produce the “straight-six” units of the M 159 series (2,6 litre OHV). Not a really big and powerful engine, but something to strart from. Wolf Dieter Bensinger, being in charge of the engines development, took care of its evolution. The displacement grew to 2,8 litre, then to 3,0 litre and the cylinder head was redesigned, to fit inisde bigger valves and a new camshaft. Its final project indicative: M 186 (2996 cc, 115 PS). This engine was paired with a 4-speed manual gearbox.

This engine was about to be mounted on a modified X-shaped chassis, taken over from the pre-war W 153 series (wheelbase of 3050 mm). Other critical points to get over were the exterior and interior design. Daimler-Benz was far from having a proper design department by the late ’40s. Nice side: the typical clientele of the luxury segment usually has conservatory tastes. Not so nice side: all of the late pre-war Mercedes designs were obviously obsolete, since they still had a quite narrow cabin, with steps aside and their headlamps were not integrated in the fenders’ shape.

Clearly, a completely new body had to be drawn from scratch. In the beginning, Karl Wilfert, responsible for the passenger cars projects, came with the proposal of a deeply altered W 153 design.

Wilhelm Haspel, executive officer of the administration board told him: “Where the matter of shape is concerned, I believe that – even if you have fallen in love with this change – you will not contradict me when I say that this resultant object has become disproportionate and, therefore, decidedly inelegant. In short, there is no sense in wanting to change and modernise to such an extent, an object that was created from a different overall design; the result will be a bastard and one should not do such a thing.” 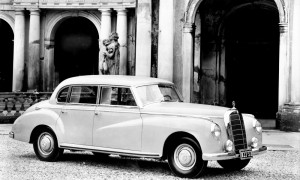 This impasse was solved by appointing Hermann Ahrens as design responsible for the so-called W 182 model series. He managed to draw a harmonious body, integrating new functional and styling details in a noble shape, with a traditional touch. The chassis had to be reinforced for supporting a heavier body – the new body design supposed the rear overhang to be lenghtened. A new rear axle with independent suspension (swing arms) was also fitted. After all this work was done, the final version of the car was known under the W 186 indicative. 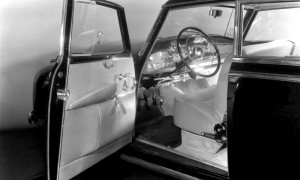 The Mercedes 300 limousine was presented at the Frankfurt International Motor Show in April 1951. Everybody around was impressed both by the amplitude of the effort spent by the Daimler-Benz to come back to the highest automobile market segment and by the automobile itself. Some of the car’s features that had drawn the attention: the torsion bar from the rear axle had an adjustment system with electric engine (optimising the suspensions’ behavior depending of the load), safety conical-pin locks were preventing the doors from springing open in an accident, heating system with blowers was included in the standard equipment. Starting 1957, the engine got a manually-controlled intake manifold and fuel injection. In 1958, the power steering and the air conditioning were added to the options list. 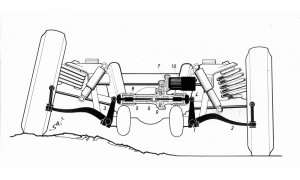 Regarding the price, the Mercedes 300 / W 186 was as expensive as the Rolls Royce Silver Cloud, but it was superior in terms of performance. Refined Coupe (W 188 I) and Cabrio (W 188 II) body versions were later added to the 300 range. These were almost entirely hand-built. The 300b (presented in 1954) had a more powerful engine, with a higher compression ratio and Solex carburettors (125 PS). The 300c (1955) gained as option a 3-speed automatic gearbox. However, the most powerful version of the series was the 1955 Mercedes 300Sc, feeded by fuel injection (175 PS).

An unofficial tale says that, at a certain moment, Konrad Adenauer (the Chanchellor of the Western Germany Republic), asked Wilhelm Haspel regarding the Mercedes 300 something like: “Haven’t you got anything bigger?”

This question came as a consequence of an earlier trip of Adenauer in the USSR (1955) that included a visit in Moscow, onboard an official car transported from Germany. When entering the Kremlin’s yard to meet Nikita Khrushchev, Adenauer felt dominated by the massive ZIL black limousines, seen around there and kept in mind to redeem the image of Germany in this respect. Maybe this explains why, in 1956, a bigger version of the 300 became available, with a 20 cm longer wheelbase. Its project indicative: W 189. 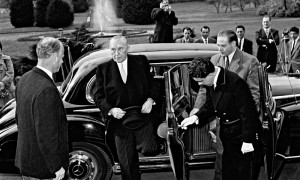 The engine and the axles of the Mercedes 300 were eventually modified and taken over for achieving the Mercedes 300 SL “Gullwing” (W 194 and W 198) coupes. These were not sharing any structural or body detail with the big and heavy 300 limousine, being based on a lightweight tubular frame.