Mercedes gives you wings. More than six decades since the inception of the legendary supercar, Auto motor und sport is presenting its Mercedes 300 SL Gullwing test.

Cutting through the morning mist in the dark Black Forest is a noisy auto transporter. Things that move life itself. Yes, it finally comes. One lazy Tuesday afternoon, the Gullwing, car royalty at its best, is ready to entertain just like it in the first day it has left the factory.

Even mundane places such as the airport of Lahr can become the stage for a truly memorable experience. The truck stops, the rear ramp folds down, the Mercedes 300 SL carefully rolls out. Standing in front of our hungry eyes as if it were a normal car. Something it never was and never will be. 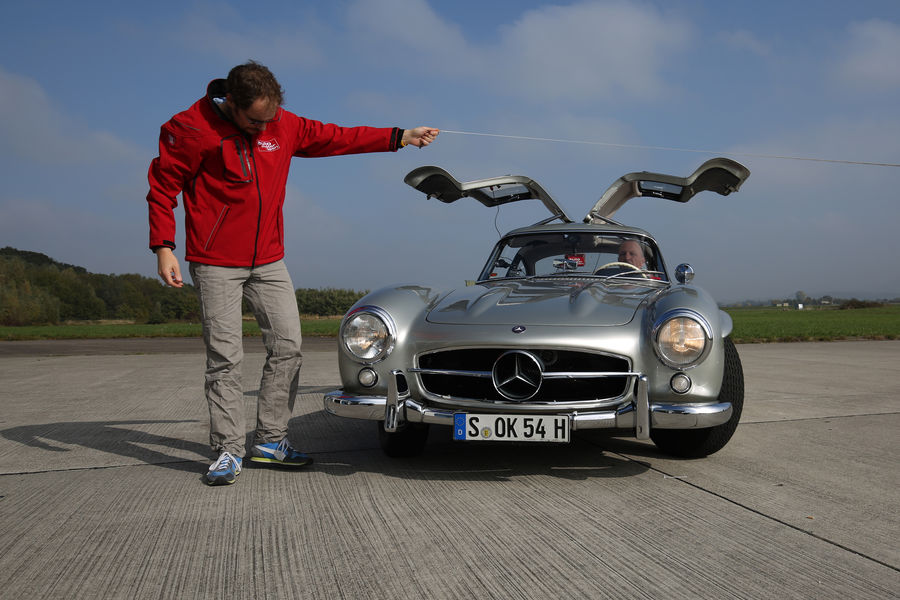 It would be difficult to inspect the 1,400 units ever to be built and not come across a prominent owner. The silver Mercedes 300 SL here comes from the USA. Straight to the gas station, so that we can fill the huge 130-liter tank at the rear with Super Plus. The impressive quantity ensures a gentle heaviness in the back, as the balance of the unladen mass shows on the road. 1330 kg, this is how much the Mercedes 300 SL weights – 81 less than your run of the mill VW Golf 2.0 TDI.

We wire the measurement electronics, set the GPS receiver on the roof and jump behind the wheel. The BIG wheel, that is! Off to the runway then. Until oil and water warm up, we measure only Tacho deviation and interior noise finding out that the Mercedes 300 SL is as loud as the current crop of compact cars at 130 km/h. And there are already 85 300 dB (A). 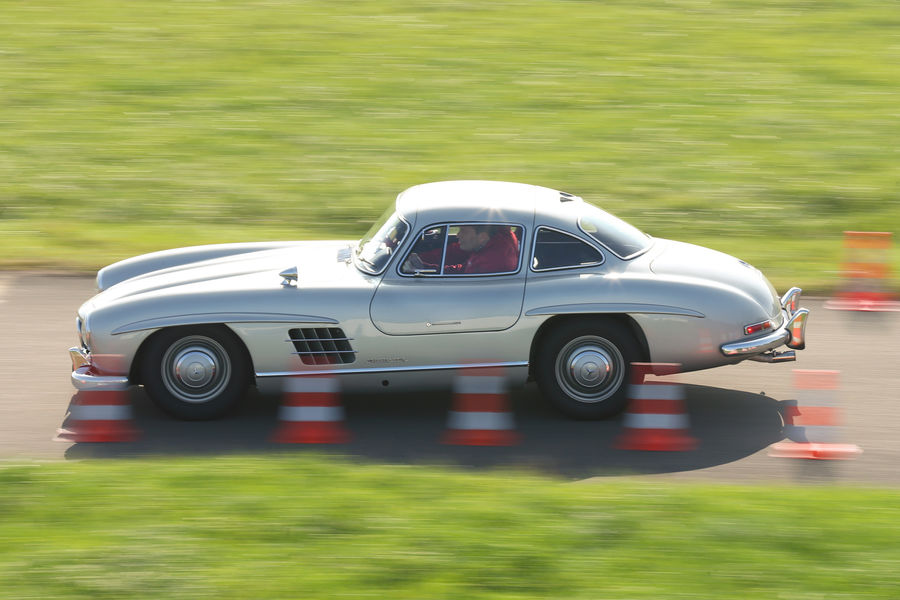 We drive to the end of the runway and align to the start point of the acceleration measurement. This must be a good time to remember what an insane car the Mercedes 300 SL was at the time of its debut. It is produced on the basis of a race car, winning the Mille Miglia, Le Mans and other Grand Prix all over the world. As the 300 SL went into production in 1954, the VW Beetle developed precisely from 25 to 30 hp, reached 110 km / h and costed 3,950 German marks. This corresponds to 19,100 euros in today’s purchasing power, similar to the price of a Golf 1.2 TSI with 110 PS. Compared to the Beetle the Mercedes 300 SL was 29,000 marks (140,500 euros today that would be) or eight times as expensive and with 215 hp, over seven times as strong and more than twice as fast at 235 km/h. Compared and converted to today’s values displayed by the Golf, it means that the 300 SL was good for 790 hp and 417 km / h. The Mercedes 300 SL truly was the Bugatti Veyron of the 20th century. 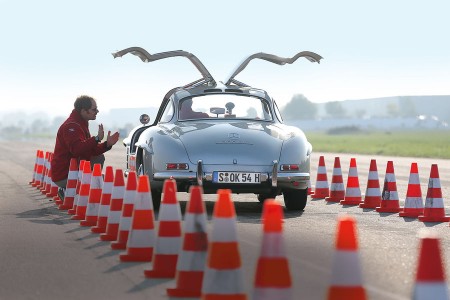 Fast forward to present day again. 3,000 rpm / min, gear change is impeding. Minor scraping of the rear wheels and the 300 SL roars ahead. Change to second and we realize how fast and accurate the synchronized four-speed gearbox is. Second gear is enough to reach the 100 km/h mark in 7.2 seconds.  Do not forget we are talking about a 60 year old car, after all. One which needs only 34.8 seconds to get to 200 km / h. Now, if one must argue that a Skoda Superb 2.0 TSI can fly in 7.3 seconds to 100 km/h, we say that back in its days the 300 SL was the only car of its kind to drive that fast.

For it was not all about speed, but the way it translated to the road too. And this can be seen even in the brake tests. The Mercedes 300 SL came with four drum brakes, 26 centimeters in diameter, coupled with ten-centimeter wide pads (disc brakes have only appeared later, on the Roadster). It was also the first car with brake booster, more relaxed in terms of directional stability. From 100 km / h, the Mercedes 300 SL stops after 49 meters, from 130 km / h after 86.2 meters. 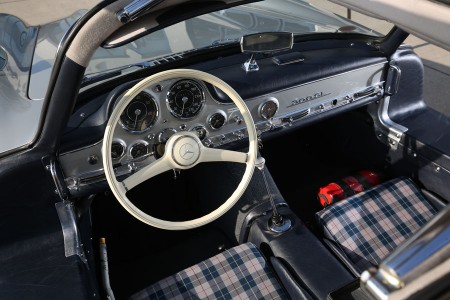 Time for slalom and lane change tests. The Mercedes 300 SL complies happily. With a 13.9: 1 ratio, the steering feels very direct and alive, remaining impassive around the center position, but stiff. This could also be attributed to the 100 kilos of fuel in the tank, placed ideally right above the rear axle. Even so, in the driving tests the Mercedes 300 SL feels rather dull to drive, mostly due to the bouncy rear swing axle. In order to drive it fast, you have to be either very talented or very brave.
The 300 SL is not for drivers, but for real pilots!

Because caution is indeed the better part of valor (not mine, but Shakespeare’s), we set off only after the interior is measured, careful to return through the Black Forest in all our pieces. To make it clear, the value of a Mercedes 300 SL today is 1.5 million euros and calculated per minute rises, according to forecasts, by 50 cents. To 30 euro per hour, 720 euros a day, 21,600 a month and 260,000 in the year. Quick, let’s go before it is even more expensive. 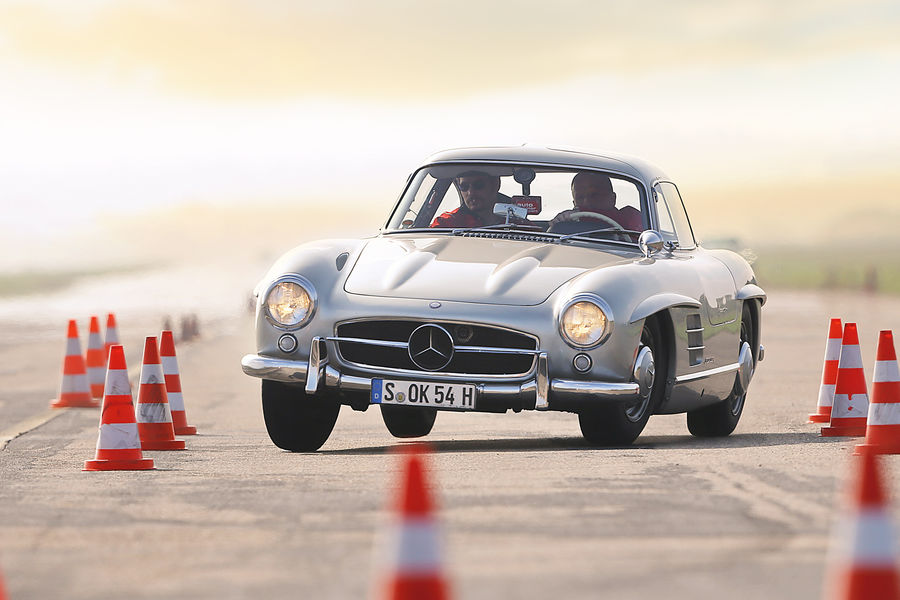 Press and turn the ignition key. Old school! The six-cylinder starts. Its foundation dates back to the L 1500, a truck from the ’50s. The engineers dialed its power up from 70 hp to 159 hp thanks to more displacement, sharper camshaft and many other modifications made to the M194. From bitter idle to pulling homogeneous takes little time, all not so violently until 3.000 rpm. The moment when the 300 SL roars with great hunger straight to 6500 rpm. The Mercedes 300 SL is really fast – even for the current standards. But above all, it calls for all your concentration. Every single moment.

Past the Bad Peterstal corner, the road climbs up straight through the forest. Forget about the 1.5 million euros. Pedal to the metal. The Mercedes 300 SL roars ahead, the sun shining on the double louvers on the bonnet. Curve braking early, switch back to the stubborn wheel balancing, early on the gas, get ready for the rear-end dance. And again back to its full potential. 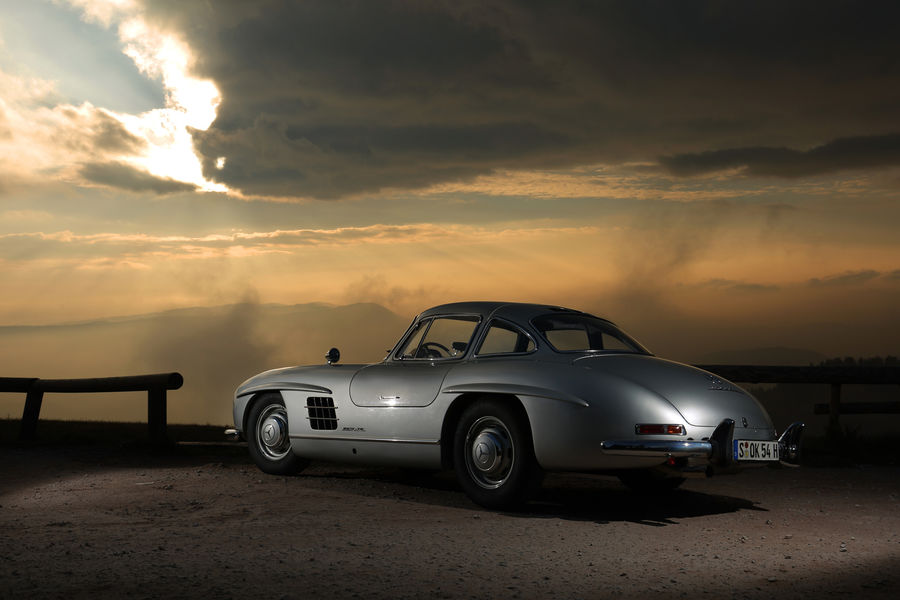 Hours later, the Mercedes 300 SL will arrive safely in the underground car park. But now he is enjoying the last rays of the evening sun, exactly where it belongs, where it will always deserve to be: on the race track.