You need a certain amount of madness to mount a V12 engine from the Mercedes 600 SEL W140 in a Mercedes 190 E. But the Dutchman Johan Muter has succeeded and is now selling his dream for 69,000 euros.

The Dutchman Johan Muter worked for three years to turn his dream into reality. “My plan was to place in the smallest Mercedes from the 80’s the biggest engine of that time,” says the Dutchman who runs the tuning workshop JM Speedshop.

He didn’t have to search too much because the Dutchman had a Mercerdes 190 with a 2-liter gasoline engine with carburetor, a W201 with an M102 engine that he imported from Germany in 2012.

But the gearbox was in good condition and the engine was in very good condition with only 100,000 km. The Dutchman believes that the 6-liter V12 engine M120 is the best engine in the history of Mercedes – a work of art. 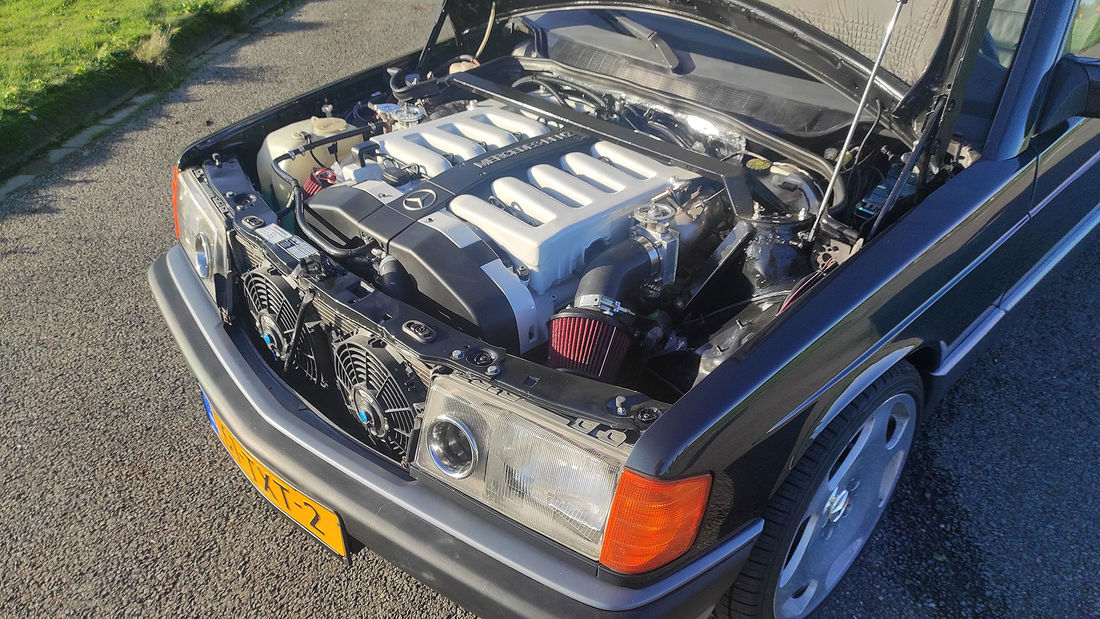 In October 2016, he started working and the operation lasted no less than 1,500 hours. Many thought it was impossible to place a V12 engine in the  a such compact car like 190 that had engines with up to maximum 6 cylinders. The Dutchman made a show of this transformation operation by posting no less than 50 videos on youtube.

To support the higher weight of the V12 engine, Johan mounted a secondary frame and a new engine mount. And because the space was too tight, the aspiration comes through the fog lights. The engine was mated to a 5-speed automatic transmission taken from the 1996 CL600 while the front brakes were from the SL 500 R129. The radiator, differential, rear axle, cardanic shaft and drive shaft (the last two in short form) were taken from the Mercedes 600 SEL. The steering comes from the W210. The 18 inch wheels are taken from the S-Class W220 and are worn with 225 tires on the front and 255 on the rear. The leather upholstery comes from a 190 E 2.3 16 from 1987.