The meowing mechanic – Cat saved from the engine of a Mercedes

This woman’s heart must have skipped a beat as he was driving back home in Deerfield Beach, Florida, one late afternoon. The young bank employee heard the engine of her brand-new Mercedes purr in a very strange way.

The female driver thought that maybe it was just her imagination, so she drove on. Yet, a meow got her attention. From that moment on, she pulled over and did not move an inch. She just called 911 and the operator sent the fire department specialized in high-risk rescue operations. Once the fire-fighters arrived, the driver complained that her car was… 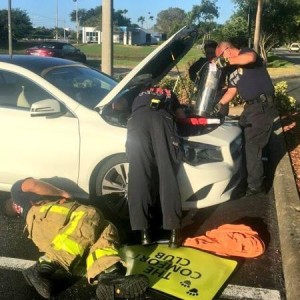 The rescue experts from the Broward Sheriff Fire Rescue spent most of their afternoon taking down components from the new car, chasing the tiny cat with their hands around car parts. Eventually, they found the meowing “mechanic” hidden in the engine compartment.

“They spent a good 20 minutes playing hide and seek with the kitten,” said spokesman Mike Jachles. “He kept darting around the inside of the engine compartment.”

No information about who adopted the cat though, but since the feline has already become a car expert, living in the home of a mechanic would not be such a bad idea.

And it’s not the first time the local fire department is called to save a kitty from the engine compartment of a Mercedes. Back in 2014, they pulled a calico out, as LoveMeow reported back then.