This is the car that will help Lewis Hamilton chase his record-breaking eighth World Championship title. Mercedes-AMG Petronas has just revealed the F1 W13 racing car and officially presented the lineup.

The Silver Arrows are back following two seasons in black. Lewis Hamilton and George Russell will be the all-British lineup, driving a German-powered car built in England, in Brackley and Brixworth, under the supervision of an Austrian Team Principal and shareholder, Toto Wolff.

The three of them stood face to face with the Mercedes-AMG F1 W13 E Performance. The car is so different that nothing seems to look familiar about it. 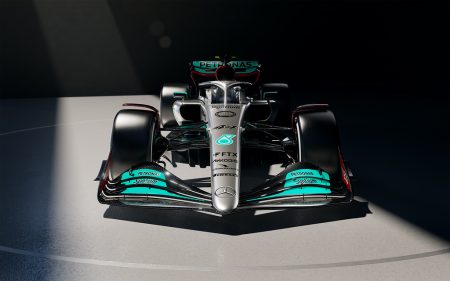 “Nothing but the steering wheel is from last season’s car. Engineers love a challenge and therefore it is a fantastic opportunity to do something fresh. In the aerodynamic world, normally you are chasing after little bits and pieces, but with such big regulation changes, the gains have been coming in big chunks which is quite satisfying, Mike Elliot, Head of Aerodynamics, explained for veteran F1 journalist, Natalie Pinkham.

“A year with an almost seismic change in regulations is exciting for all of us”, Toto Wolff says.

Mercedes presented this year’s racing car in a flood of laser and shadows, with goose bumps-providing choir music, and Toto Wolff’s voice saying “We start again from zero.”  It is the thirteenth car produced by the Mercedes-AMG works team since re-entering F1 in 2010.

“We have no idea how it’s going to handle”, Lewis says, right before jumping in the race suit and hitting the Silverstone race track if weather allows it. Storms Dudley and then Eunice have been sweeping the UK for the past few days.

The seven-time world champion made it clear for all those worried (or happy) about the rumor mill that indicated a possible retirement. “I never said that I was going to stop. It was obviously a difficult time for me. And I needed to take a step back, have my family all around me, great moments”, Lewis explained.