Sportiness and character are at the heart of BMW’s best-selling 3-Series, but now the Bavarians want to conquer all thanks to its newly-found practical virtues. Their chances (and the updated 3-Series’) are clarified in the auto-motor-und-sport.de comparison with the Mercedes C 250 d and the Jaguar XE 2.0d. Let the games begin. 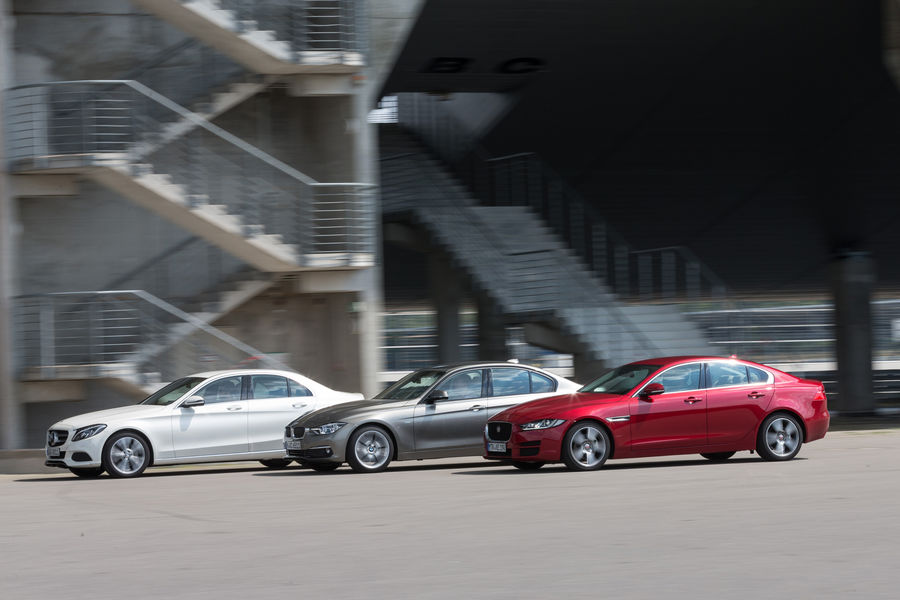 When you go up against the BMW 3 Series and Mercedes C-Class, chances are you might fight with the wind mills. Just like Jaguar. From 2001 to 2009 only 350,000 X-Types were built. Meanwhile the German competitors sold more than two million copies. However, unlike its predecessor, the Jaguar XE is not a disguised Ford Mondeo anymore, but an ambitious new contender, new from the ground up. Mercedes has also renewed its C-Class in 2013 so BMW had to come up with a raft of visual and technical upgrades in order to bring the 3-Series bang up to date.

In the mid-size premium segment, four-cylinder diesel is the only way forward. The Germans know this, gathering for the comparison the XE 2.0d, the C 250 d and the 320d, all in combination with an automatic transmission: the Jaguar XE 20d Prestige with 180 hp for 41,250 euros, the C 250 d with Avantgarde-line exterior and 204 hp for 45,428 euros and the newly renovated 320d with 190 hp and Luxury equipment that liftt the basic price of 39,400 to 44,750 euros. In addition, all test car were equipped with extra 18-inch alloy wheels.

That the 3 goes by the name of Luxury mostly means standard niceties like heated leather seats, genuine wood decor and chrome trim, but no change of character. On the contrary! For the 2016 facelifted 3-Series BMW has in fact taken the driving dynamics one step ahead, making handling and steering feel even more real. Or so they say… The firmer dampers yields together with the variable sport steering (250 euros) and the adaptive suspension (1,100 euros) a tremendously precise, agile and joyful cornering, plus the fastest speeds in the slalom and double lane change. The let-down? Clearly the variable rack steering could use more feel, as the standard set-up tested in other occasions proved to be marginally more alive.

What about comfort? Ever since its inception, the 3-Series has never been a flowing carpet, and transverse joints now make the suspension unsettled, hard even in Sport mode. No drama, and certainly not a security threat, but the rivals can put to rest such distortions noticeably quieter, although the BMW’s payload is also nominally the smallest (455 kg). 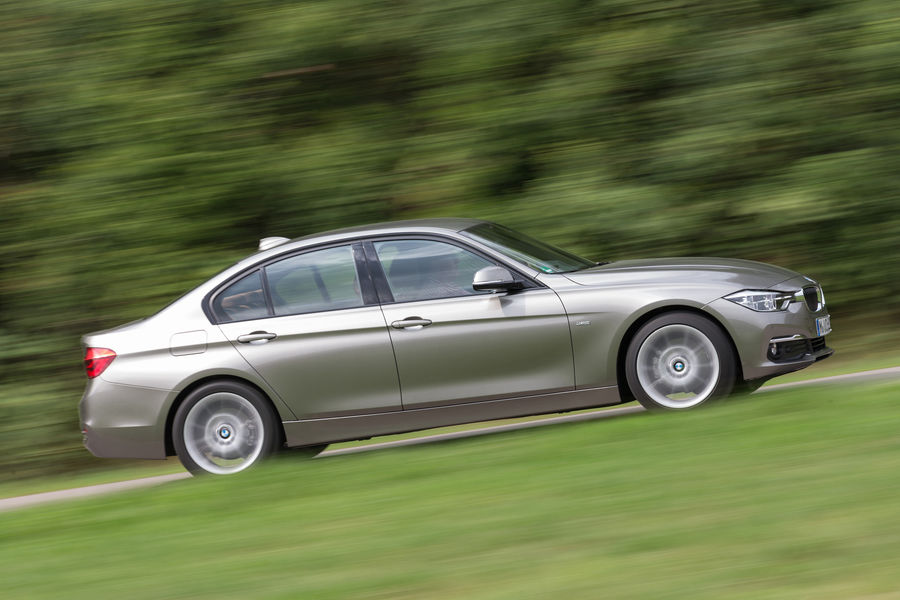 More determined, the new two-liter diesel makes a better impression. Not with better manners, though, but with more power (190 hp) and torque (400 Nm). It proved to be extremely vibrant and willing to rev, partly in thanks to the excellent coordination with the 8-speed ZF  Sport automatic gearbox. Its 120 kg weight advantage is also a big plus which helps the 3-Series reach the same performance figures as the stronger Mercedes. A consumption advantage, however, it cannot withhold. With 6.7 liters per 100 km, it ended the test with exactly as much as the previous model and a tad bit more than the competition too, as a matter of fact.

In turn, the brakes are always at their best, just like the ergonomics and space on offer. The iDrive controller continues to set the standard in any case, eclipsing the rather average interior quality. A strong overall package and therefore a serious opponent to both the C-Class and the XE.

And Jaguar knows this, choosing the 3-Series as its yard-stick for its own XE. Not stylistically, mind you, as the British sedan is still unmistakably… British. The wide grill commemorates the first XJ, while the roof clearly apes the look of a coupe, gently sloping into the short rear-deck. The same sensuous profile makes access to the rear and corresponding space a tad disappointing. 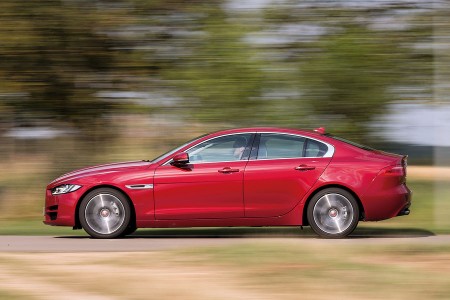 These weaknesses are not the Jaguar’s only downside, however, its beautiful but sparsely padded leather seats, its panels with different optics and material quality, its improper fittings and dreary, low-contrast instruments all conjuring against the XE’s status at this price and expectations level. The complicated operation of the touch-screen infotainment also feels out of place in a 40.000-euros plus premium sedan. Push the start button and the XE’s biggest asset, the new two-liter diesel, comes to life. But is it truly an asset? A bit grumbling at idle, its low-down turbo-lag is quickly concealed by the eight-speed automatic transmission with torque converter slip. But not for long, as when overtaking or accelerating out of corners, the Jaguar simply acts more slowly and often inconclusive as the identical engine in the BMW. The consumption saves face as the XE finishes with the lowest test consumption in this round (6.2 l / 100 km).

More enthusiasm, however, is awaken by the light-footed, zippy handling and homogeneous, direct-feeling electromechanical steering. Between the zest of the 3 Series and the reluctance of the Jaguar C-class, the XE falls right in the middle with its fluent and smooth character. Surprisingly, the rather firm suspension does not come at the expense of comfort, in addition to the good braking performance.

By contrast, the C-Class brakes disappoint and remain regularly behind the excellent values displayed by both the 3-Series and the XE. The C 250 d maintains instead classic brand virtues such as quality or comfort and the feeling of “consistent vehicles”. Any sudden maneuvers he copes with similarly safe and calm as its rivals, but pampers its passengers with the optional air suspension’s (1,416 euros) tendency to hide even the biggest of road bumps. High payloads are not the Airmatic’s specialty though. 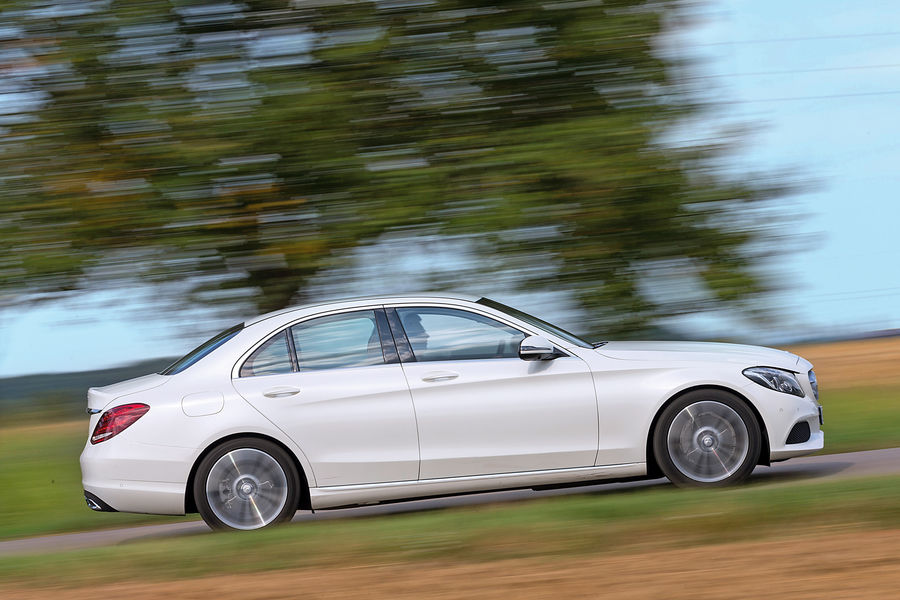 The C-Class’ engine is also a good measure for its rivaling 2.0-liter diesels. Twin-turbocharged, the 2,1-liter diesel with 204 hp and 500 Nm holds back acoustically, dubbed with the force of its torque, the sometimes hesitant gear change of the seven-speed automatic transmission and the high curb weight (120kg more than that of the 3-Series). In addition, the solid construction inherent to Mercedes’ legacy does not translate into a noticeable subdued temperament or increased consumption, but in the unshakable solidity of the interior. The C-Class holds no more space than the 3-Series, unfortunately, which ultimately proves to be the rounder package. 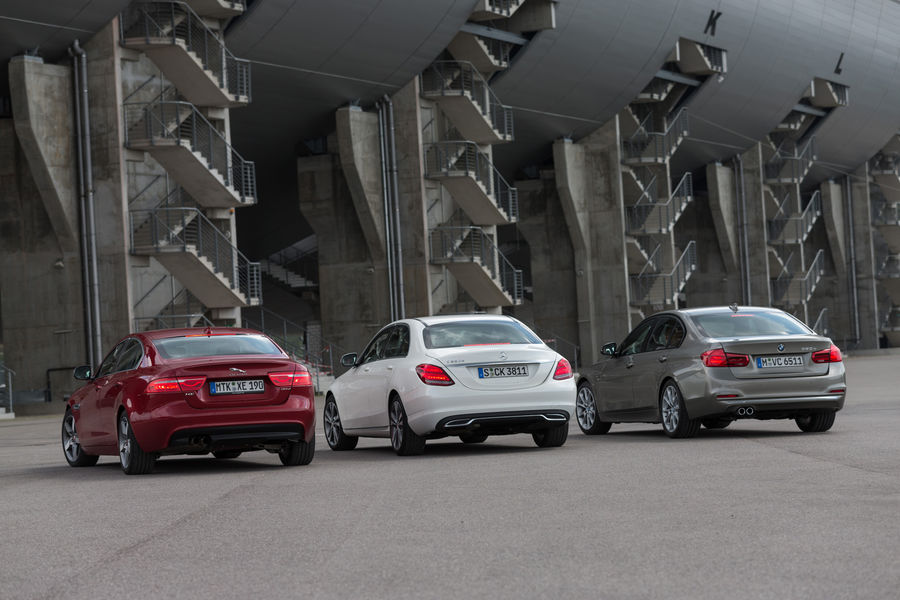