There are cars – like coupes, for example – which simply beg to be tuned, but approaching others is a whole lot trickier affair. Big, luxurious limousines, for example, fall into that category.

If you’ve read some of my previous texts on tuning, you’ll probably know this is a minefield subject for me – one where it’s just as easy to screw things up beyond all recognition (I would have said FUBAR, but kids might be reading) as it is to produce a true work of art.

If in the case of SUV, I only see the point of tuning if you’re going to make that car more off-roadish than it used to be, when it comes to big barges like the S-Class limousine, the only type of tuning I condone is that which aims to make the car more luxurious. Not sportier, not more opulent, but simply a car that’s even better than the original at what its creators meant it for.

Looking at the MEC S-Class, you’ll find yourself scratching your head trying to spot the differences. Don’t worry, they’re subtle, but they’re there. You won’t stand out with this MEC S-Class when there are no other S-Classes around, but your efforts will become apparent once a standard Mercedes-Benz limousine pulls along. 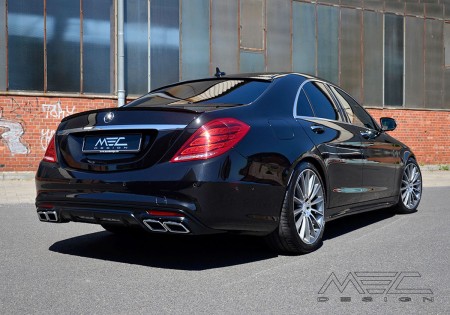 The MEC package is only available for S-Classes equipped with the AMG package, but not for the actual S 63 AMG version itself. While it does make the car look more aggressive, it’d be hard to call end product “sporty looking”. Actually, the slightly modified bumpers and the exhaust pipes manage somehow to give the S-Class a menacing elegance that the stock car lacks, while also keeping very clear the fact this is a car to be driven with.

Some people might be tempted to call this kind of discreet tuning “lazy tuning”, but this industry has shown on so many occasions that a good dose of refraining and knowing when to stop are the two things it lacks the most. This MEC S-Class is a nice departure from the norm and something we’d like to see more often. And also Brabuses.