Elena Luchian, August 29, 2018
2.7K 0
Home Auto news MBUX for EQC – This is how the interior of the electric crossover will look like

Gone are the days of the physical buttons inside the cars when it comes to those built by Mercedes-Benz. Thus, the EQC electric crossover is getting the state-of-the-art MBUX (Mercedes-Benz User Experience) system, that made its debut with the all-new A-Class.

The latest video teaser reveals the interior of the premium electric SUV with the three-pointed star. The new dual screen layout with displays of 10.25-inch each, with very few physical buttons in the center console replaces the conventional instrument cluster and touchscreen. Now they are both seemingly united under a glass cover, emphasizing the minimalist, yet luxury design onboard the first car of the new electric family. 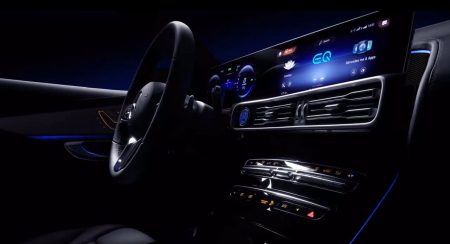 In the A-Class, the MBUX is available in three different shapes and sizes: two 7-inch screens go into the entry level variant, the 7-inch and 10.25-inch screen combination is installed in the intermediate version, while the two 10.25-inch displays fit the top-of-the-line models. The MBUX will soon find room in all of the company’s cars.

Piano trims, ambient lighting, conventional air vents like those seen in all of the upgraded models can be found onboard the EQC.

The car comes to battle Tesla’s Model X, Jaguar’s I-Pace and the future Audi E-Tron. Similar to the concept that previous the series model, the electric crossover should get two electric motors and a 70-kWh battery that provide a range of approximately 500 kilometers (310 miles) in between charges.

The Stuttgart-based premium car maker has already shown the front of the EQC, that is getting LED headlights and the derriere of the vehicle, that comes with an LED light strip connecting the taillights.

The Mercedes-Benz EQC shall be presented on the 4th of September in Stockholm, Sweden. The first customers are set to receive their brand-new zero-emissions car in the beginning of 2019.