Maybach SUV on its way. When will it arrive?

The first genuine Maybach SUV in series production guise is on its way. It will be based on the GLS SUV and it has already been anticipated by the Vision Ultimate Luxury Concept, revealed last year, at the Beijing Motor Show.

The first Maybach SUV will be shown in November and will by no means resemble the Vision Ultimate Luxury, which was, in fact, more of a huge ground-clearance sedan than a real SUV. The images caught by the spy photographers for the past few weeks have shown that the future Maybach is set to feature a genuinely SUV-typically shape, similar to that of the regular GLS. It shall though come with elements that will confirm its belonging to the Maybach family.

Therefore, the radiator grille will have the vertical slats specific to the model, while the hood and the rear pillars will bear the “MM” logo. The ultra-luxury GLS will take over a series of features and equipment of the S-Class Maybach. A Burmester 3D sound system with no less than 27 speakers, 24 amplifiers and 1590 Watts is on the list. 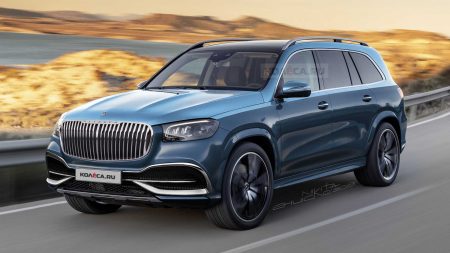 Mercedes also offers the fragrance specific to the sub-brand, based on Osmanthus, leather and spicy tea. The premium car maker is hoping to make quite an impression with the high-ride exquisite model, similar to that of the S-Class: one in seven S-Class units sold are Maybach versions.

The new MM-branded SUV shall be powered by a 4.0-liter V8 biturbo engine, while the top-of-the-range will get the 6.0-liter twin-turbo V12.

In the land of the ultra-luxury SUVs, the Mercedes-Maybach GLS has been expected by rivals such as the Rolls-Royce Cullinan and the Bentley Bentayga.

Back in 2017, Mercedes revealed a Maybach G650 Landaulet, a limited edition of the already special G 4×42, powered by a V12 biturbo with 630 horsepower. Only 99 such units were build, with all sold out  soon after its reveal.