Maybach 57- How is it holding on after 17 years on the road?

Back in 2002, Mercedes attempted to build a rival for the Rolls-Royce luxury model. But its Maybach models weren’t exactly a triumph in the market. They were expensive, far from being fuel-efficient and, despite the spectacular features it came with, it never managed to keep up with the rivals.

Mercedes announced its intentions to fight Rolls-Royce with a concept the company revealed at the Tokyo Motor Show in 1997. It took them 5 years to send the Maybach 57 on the road. Daimler was planning to build around 2,000 examples per year. Most of them were for the American market. But the plan failed. The demand was so low, the Germans only build a total of little over 3,000 units. Not per year, but in 10 years.

The Maybach 57 and 62 projects were massive flops for the company, in terms of finance and marketing. But the models are so rare today that people started looking at them with some sort of nostalgia. 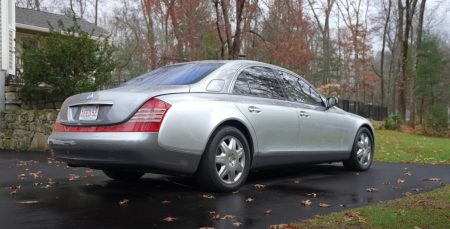 The owner of Tedward YouTube channel quenches the curiosity of nostalgic enthusiasts showing how a 17-year old model is holing on today. The owner paid approximately $350,000 for it 17 years ago.  Its price and exclusivity would soon turn it into a “young classic”.

Maybach 57 – The image of luxury even today

At 5,728 millimeters (22.5 inches), hence the designation, the luxury sedan was above the standard Benz in terms of luxury and comfort. Even performance was a step further. It came with a 5.5-liter twin-turbo V12 that delivered 542 horsepower and 900 Nm (664 pound-feet) of torque. Despite its robust stance and massive weight (2,735 kilograms or 6,030 pounds), the car was able to sprint from a standstill to 100 km/h (62 mph) in about 5 seconds. To make all that force come to a stop, Mercedes equipped its Maybach 57 with six brake calipers.

Watch the video below to virtually enjoy all the luxury that a 17-year old Maybach can offer. Individual heated seats, an entertainment system for the rear passengers, Maybach-branded headphones, a phone charger, and a refrigerator are on the very extensive list of equipment. It also includes foldable tables, massage seats, a Motorola phone popping out from the dashboard, and plenty of secret compartments that enhance practicality.