The Top Gear host Matt LeBlanc ragged the tire of a Mercedes-AMG GT R during some spinning on-board the Green Beast of the Green Hell, while filming for the BBC TV show.

The former Friends star was spinning with the AMG on the racetrack at Dunsfold Aerodrome in Surrey and screeching its tires on the tarmac, blowing some serious smoke. The photos show that, during the dramatic scene, out of the blue, his left rear rubber went bang.

“It looks and it drives like hell”, said the AMG boss Tobias Moers when the car saw the light of day. Matt LeBlanc couldn’t agree more, after tearing apart the rubber of the 585-horsepower beast, powered by a 4.0-liter V8, as it comes with the reputation of the most powerful car fully developed in Affalterbach. 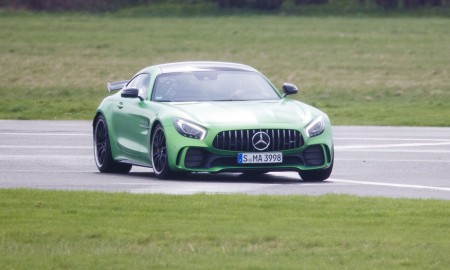 Matt got out of the green beast, inspected the damage and called for help. A member of the crew rang the pros to take care of the car with the flat tire.

Fortunately, in the grand series of Top Gear accidents, it’s far from the worse we’ve seen.

Unfortunately, a flat tyre is probably the least of Matt’s worries, as the new series of Top Gear continues. The program is battling the dropping rating figures. 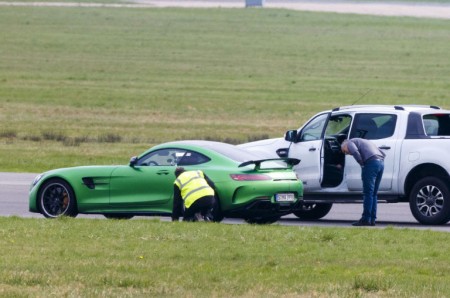