March 23, 70 years ago, the Mannheim was the first plant of Daimler-Benz AG to be liberated, in fact occupied, by the Allies at the end of the Second World War.

The facility on the slopes of the Luzenberg in the suburb of Mannheim-Waldhof was officially opened on October 12, 1908 and had witnessed production start-up more than 100 years ago. Benz & Cie. had bought the 311,000-square-meter site back in 1906, and construction work based on plans drawn up by the architect Albert Speer began in 1907. By the time of the opening ceremony, an area of around 35,000 square meters had been built on with factory buildings.

The plant played an important role in terms of Mercedes-Benz production during WW2: “In view of its outstanding technical facilities, the Mannheim plant has been assigned a particularly important responsibility within the production process of Daimler-Benz AG. In continuance of the old Benz tradition, Mannheim will be responsible for the production of diesel engines for industrial use, as well as for mid-range passenger cars and trucks. However, one of the Mannheim plant’s most important operational areas is to supply cast iron to all plants of Daimler-Benz AG from its exemplary and efficient cast iron foundry, a facility that operates with state-of-the-art equipment.”

The army forced operations to be switched to authorized production of the Opel three-ton truck. Demand for such vehicles during the war years was extremely high. As a result, the number of employees grew from 3,231 (1939) to 4,601 (1944). The workforce included 448 prisoners-of-war and forced laborers from the concentration camps, as well as 1,249 civilian foreign workers. The number of forced laborers and foreign workers reached a high in 1944. These people came from the Netherlands, Belgium, Italy, Poland, Russia, Czechoslovakia, Denmark, Croatia, Greece, Lithuania, Luxembourg, Serbia, Spain and Hungary.

For the Mannheim plant, the Second World War ended on March 23, 1945, when it was occupied by American troops. By this point, air raids had destroyed about 20 percent of all production facilities, and bombs had fallen on almost a quarter of the area. Following the occupation of the plant, a large area at the southern end of the premises was confiscated for use by the American occupying forces.

The US Army commandeered a part of the southern end of the plant for their own needs, and only gave up their occupation of the area in 1955. 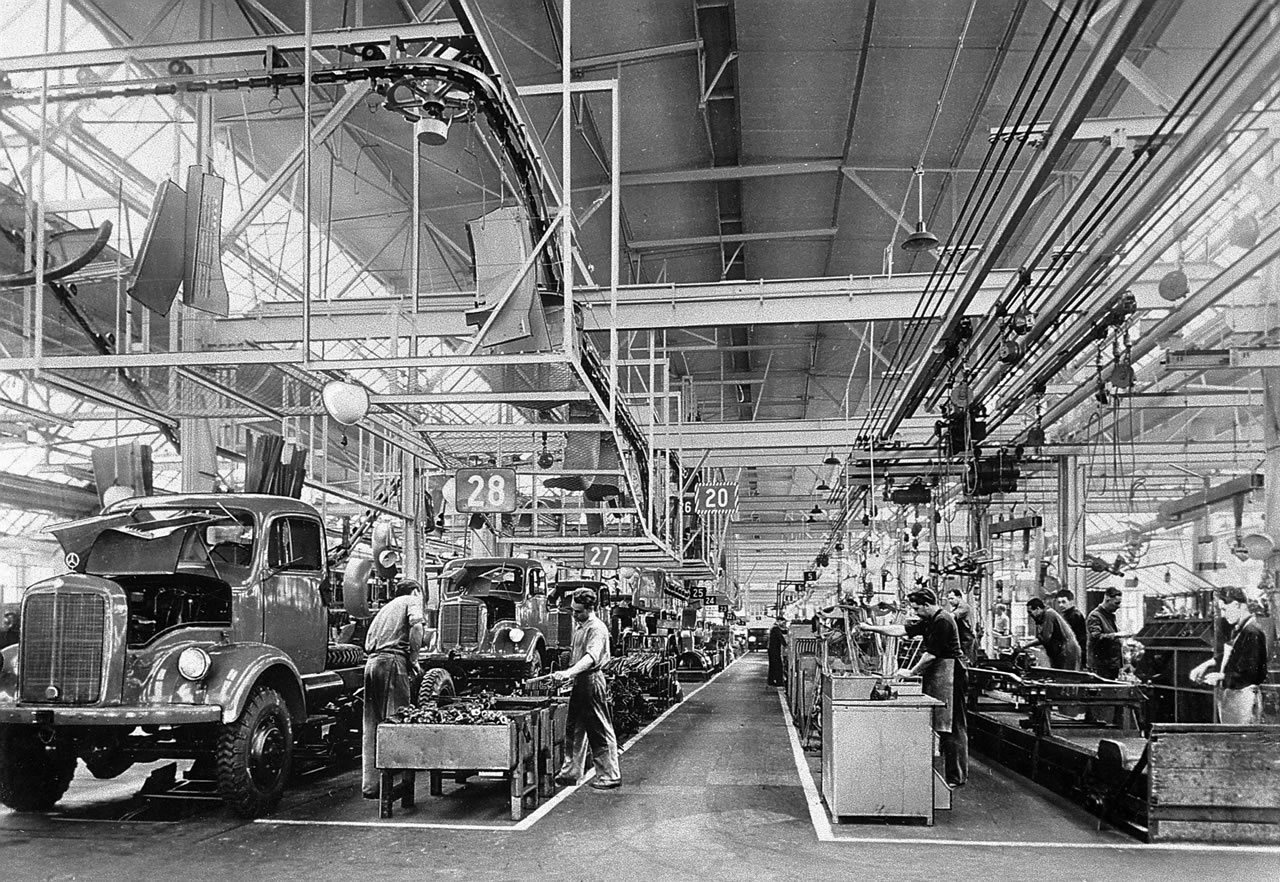 Production of the three-ton L 701 truck started again at the Mannheim plant in June 1945, making Mannheim the first plant belonging to Daimler-Benz AG to resume activities after the war. At the same time as building this version of the Opel Blitz under license, work began on reconstructing the plant. One measure introduced to help employees during this period was to grow vegetables on the premises to feed the workforce. But the war had taken its toll: “The core of the plant is still functioning. It may be badly damaged, but the engineering department and assembly shops are still intact,” reported Rhein-Neckar-Zeitung in 1946.

Then summer 1949 witnessed the debut of the new Mercedes-Benz L 3250 truck – an event that laid the foundations for the development of the modern Mercedes-Benz commercial vehicles program. Many saw the L 3250 as the vehicle that inspired the rise of Mercedes-Benz to its position as European market leader for medium-duty trucks.

Since production in Mannheim resumed very soon after the war, revenues at the plant recovered faster than those of Daimler-Benz AG as a whole. This fact was clearly reflected in the relative figures: from May 1945 until 1948, Mannheim was responsible for around one quarter of the total sales of Daimler-Benz AG. And even the absolute figures were indicative of a rapid recovery: by 1949 the Mannheim plant (48 million marks) was already well above the figure for 1936 (27 million reichsmarks), whereas total sales for Daimler-Benz AG was just 199 million marks as compared with 295 million reichsmarks. 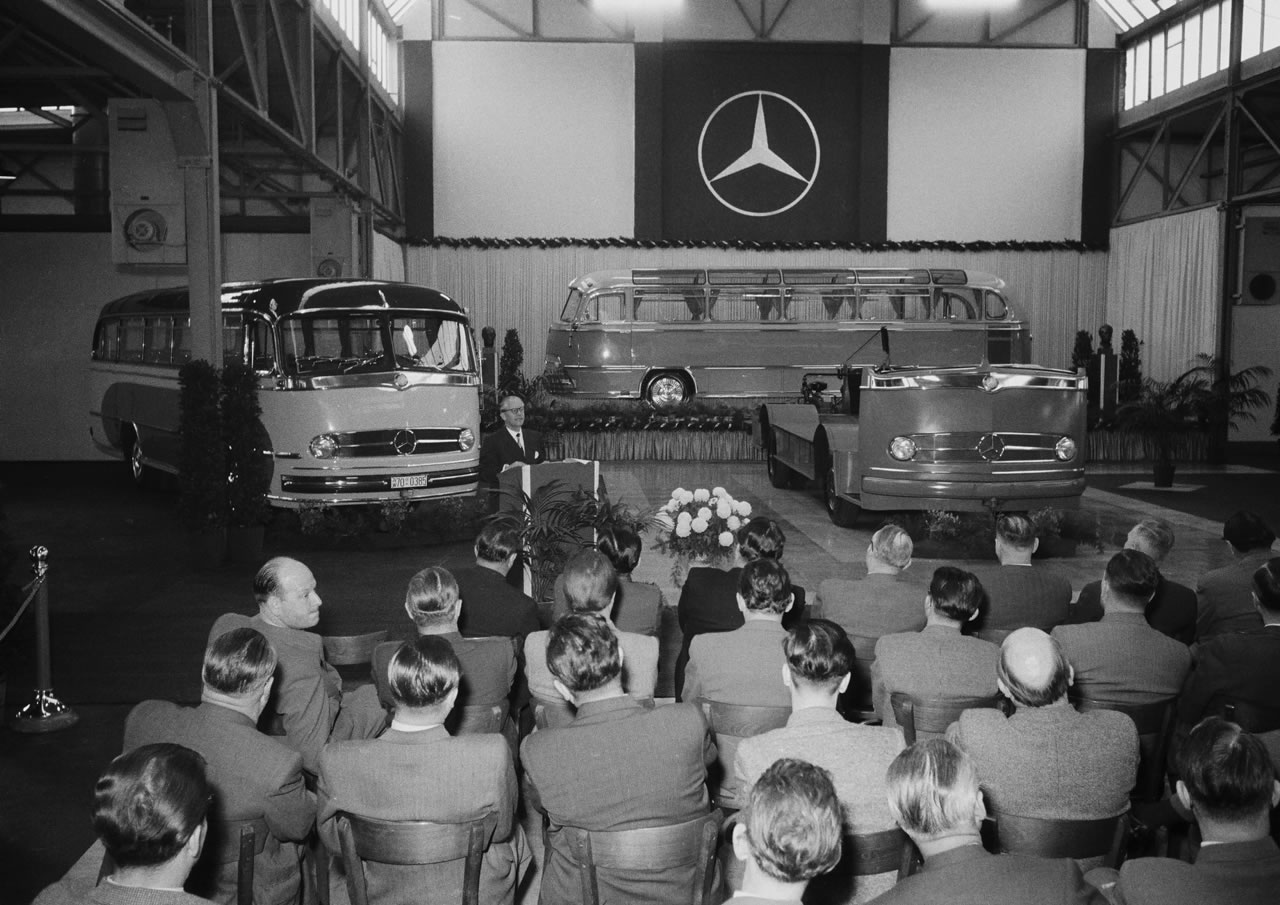 In May 1949, the new bus was presented as the O 3250, since it was based on the corresponding truck model. Adopting the traditional approach, the bus body was mounted onto a truck chassis. Then in 1950 the bus was launched under the designation O 3500.

Today the Mannheim plant, including the engine plant and foundry, has over 5,000 employees and around 220 employees in vocational training. The plant produces engines for commercial and special-purpose vehicles, industrial diesel engines and remanufactured engines; annual production is approximately 410,000 units. The foundry produces cylinder crankcases, cylinder heads and rear axle casings and flywheels for commercial vehicles, and in addition processes around 107,000 tons of high-grade cast iron. The plant covers an area of 888,344 square meters, of which roughly 320,000 square meters are given over to the engine production area, and 103,000 square meters to the foundry. 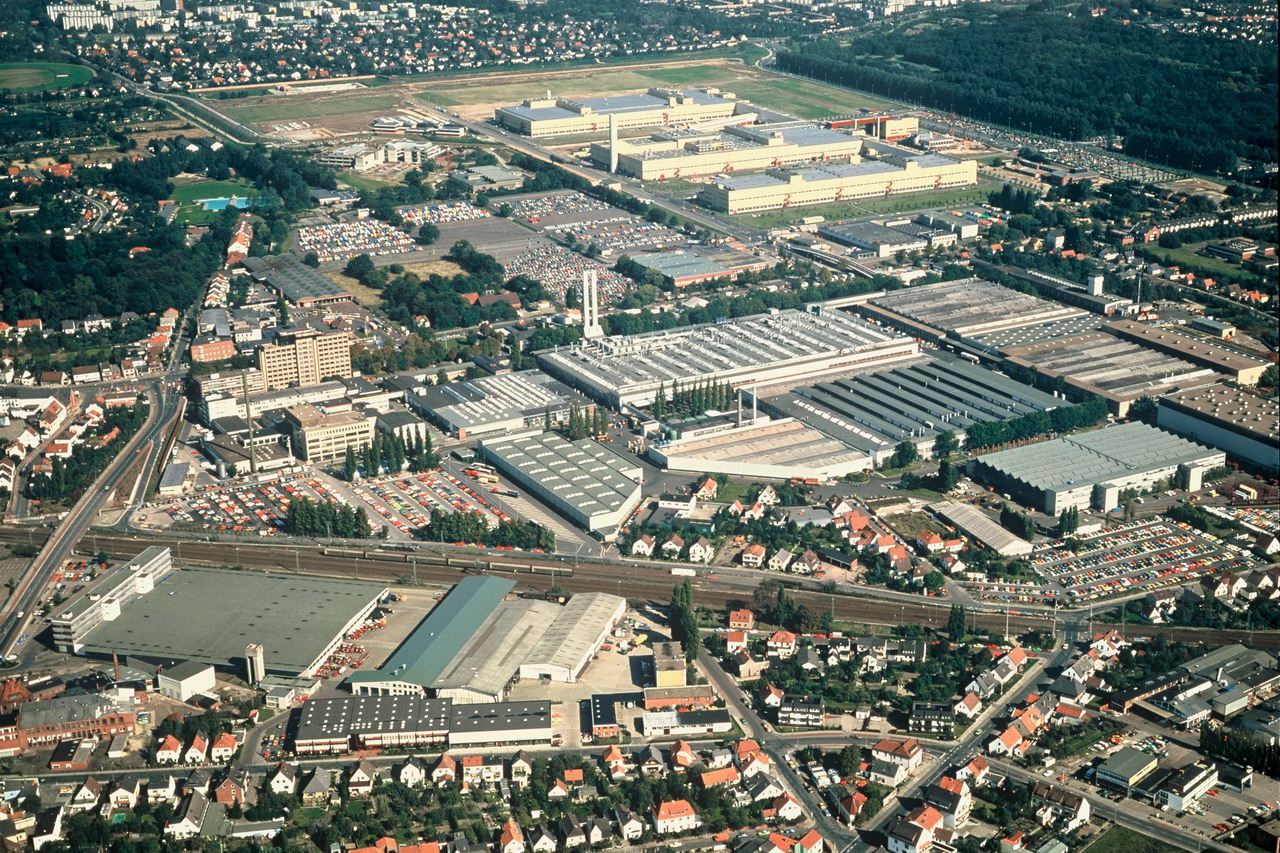 As per 2005, the EvoBus Mannheim plant had a production area of 183,000 square meters on factory premises covering 306,000 square meters. Within the EvoBus integrated production network, the Mannheim plant is responsible for body-in-white production of Mercedes-Benz urban and interurban buses and touring coaches, for interurban buses and touring coaches by Setra, as well as for painting, assembling and finishing Mercedes-Benz urban buses. The plant has a workforce of around 3,400 employees, including approx. 180 trainees.