There’s a brand new Mercedes-Benz GLE in the luxury SUV segment and the competition is already eager to see how good it is. Before its 2019 market debut, Auto motor und sport pits the GLE against the (also new) BMW X5 and the Audi Q7 in the first static comparison test. 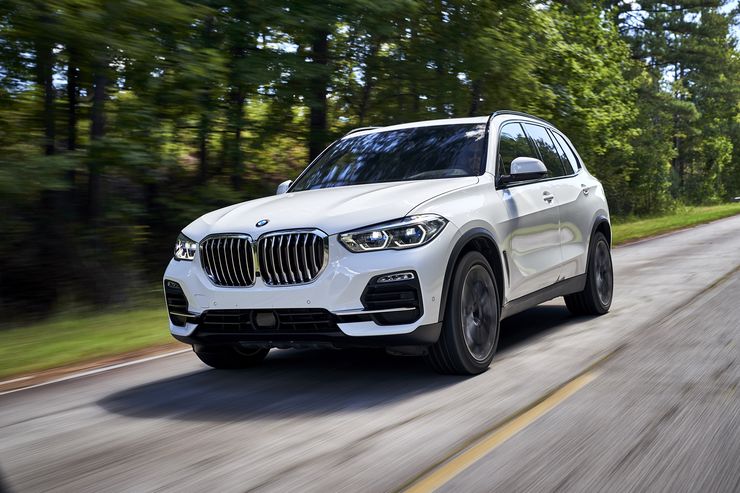 Let’s start with the dimensions and styling. Here, the Audi Q7 trumps the GLE and X5. The new BMW X5 measures 4,992 millimeters in length and the new Mercedes GLE is two millimeters longer, while the Q7 is 5.05-meter long. And each model sets its own design path: round harmony in the Mercedes, angular clarity in the Audi, pleasing dynamics in the BMW. 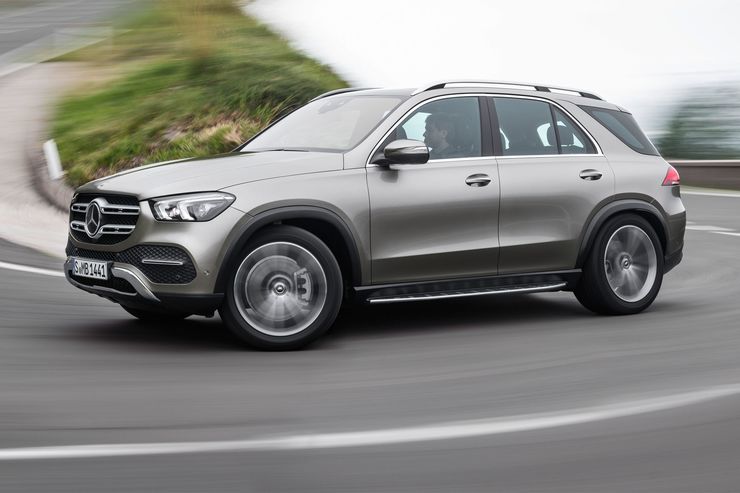 Our praises go to the Mercedes designers, who managed to reinvent the GLE without breaking the tradition. If the X5 seems to push the envelope a bit too much with fussier lines, the Audi is still pleasing to our eyes three years after its market introduction with clear, modern proportions. 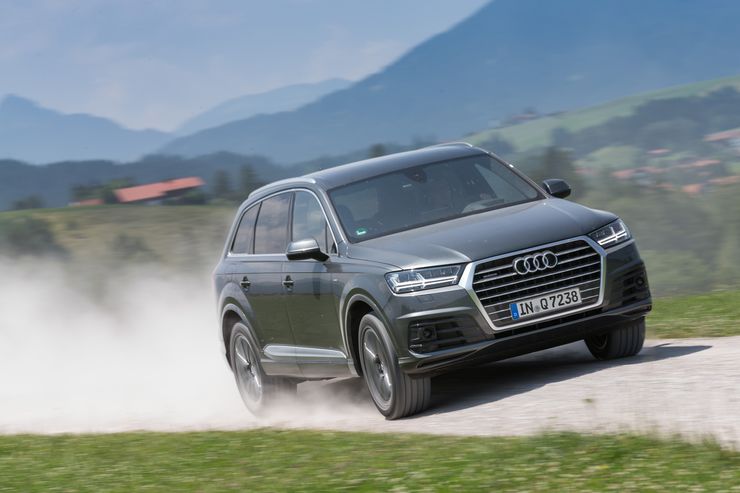 Brand identity is also evident in the interior and this is especially true for the GLE which adopts the now classic Mercedes-Benz layout with two visually interlinked 12.3-inch screens (linked to Mercedes’ new infotainment pride, the MBUX system) and all the other functions firmly defined in their familiar places: seat adjustment, heating and ventilation on the doors, the air conditioning centrally under the air vents, the gear selector lever right behind the steering wheel. BMW also offers two 12.3-inch displays for its new X5, but separates them spatially and visually from each other. 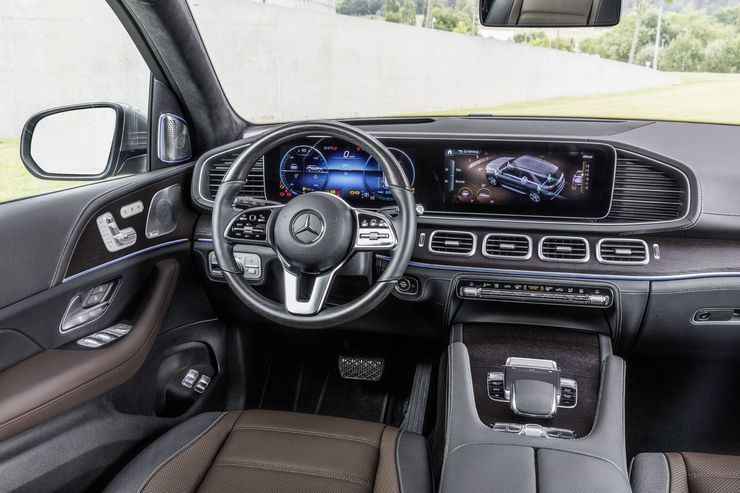 The X5 cockpit is sportier, more playful, the screens do not look so massive and, of course, in good old BMW fashion, the center console is slightly tilted towards the driver. The BMW has more buttons than the GLE and the automatic gearbox lever sits on the center tunnel next to the round infotainment controller. The Q7 interior pales in direct comparison and seems a generation behind, despite the 12.3-inch virtual cockpit instruments. However, the central MMI screen measures only 8.3 inches, which actually looks a bit antiquated. Plus: the small controller wheel sits in front of the massive Tiptronic gearbox lever, while the climate control takes up too much space on the center console. 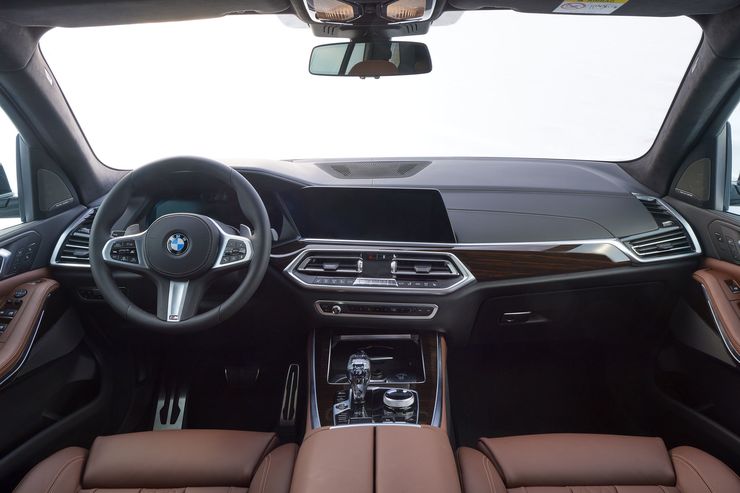 The ergonomy comparison also shows that three years in the automotive industry is a LOT. Back in 2015, Audi’s infotainment system with its touchpad functionality, free text input and voice input was considered state-of-the-art. Today, the new GLE and X5 move the game much further with gesture control with natural language understanding and a pronounced learning ability. The topic of augmented reality (the fading in or out for digital information into real images) is also playing an increasingly important role. Whether the person in the car actually uses or perceives that is another question. But those who aspire to technology leadership have to offer such things and BMW and Mercedes make perfect use of their time advantage over the Audi in this chapter. 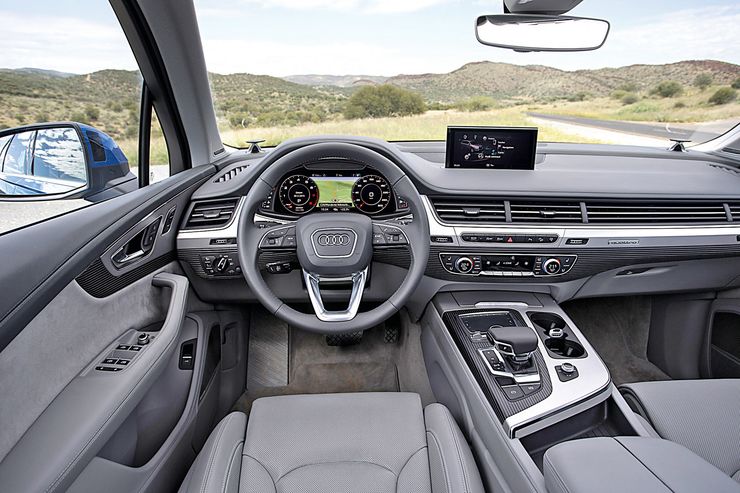 But, let’s go back to figures and analyze the practicality staged by the three luxury SUVs. This is where the Q7 shines with a boot volume estimated at 890 to 2,075 liters. The new GLE is not far behind with 825 to 2,055 liters. Clearly the last is the X5, as BMW only estimates its cargo area at 650 to 1,870 liters. Even so, the X5 tries to make up with a few interesting gimmicks: a luggage compartment cover that sinks into the loading floor at the push of a button or the rubber strips, which bulge automatically while driving and secure the cargo against slipping. The rear seat backrests can be divided asymmetrically for all three luxury SUVs: 40:20:40 for the BMW and GLE and 35:30:35 for the Audi. 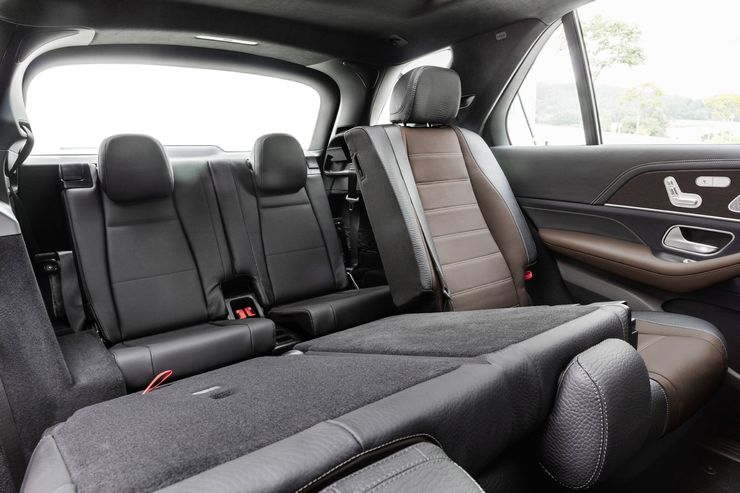 Mercedes is offering for the first time a third row of seats, just like the X5 and the Q7. All the models offer great flexibility by allowing the seats of the second row to be moved longitudinally. This not only eases the access, but also leads to leg liberties at lounge level with five seats and that is true even for the X5, whose two centimeters shorter wheelbase should attract attention. The better headroom compared to the GLE is also noticeable. Nevertheless, the larger Audi should outdo both competitors in terms of space, at both head and leg level. 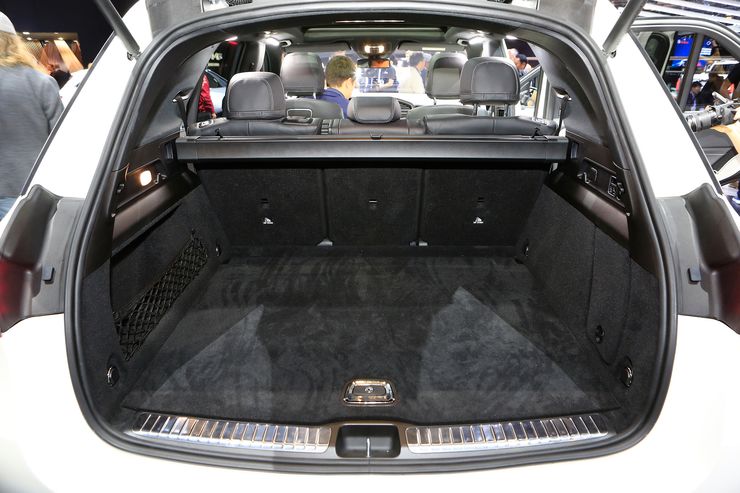 Engine strategy is also similar for the three manufacturers with greater emphasis put on hybrid tech. For the GLE, specific data is available only for the GLE 450, a 367 hp straight-six gasoline engine with turbocharging and 48-volt hybrid system. More important are the upcoming diesel engines. Their performance data should be similar to those of the E-Class which offers 286 and 340 hp. V8 petrol engines will also be added to the range, coupled to the Mercedes-AMG versions and, of course, a diesel plug-in hybrid. 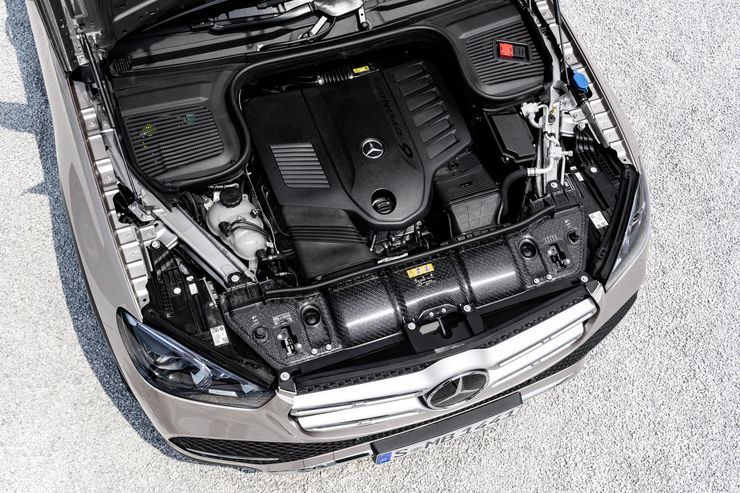 A plug-in hybrid drive will also be available for the X5 (not yet at the market launch in November), but it appeals to the more classic gasoline-electric motor combination. Official data promises a lot: 394 hp and 600 Nm total system output and an electric range of 80 kilometers. Another petrol engine, designed as a classic R6 turbo, does its job under the bonnet of the xDrive40i with 340 hp, while diesel fans will be pleased to hear BMW is offering a 265 hp and 620 Newton meters strong three-liter turbodiesel in the shape of the xDrive30d. Also on offer:  diesel with fourfold turbocharging, 400 hp and a maximum of 760 Nm, plus the X5 xDrive50i with 462 hp. 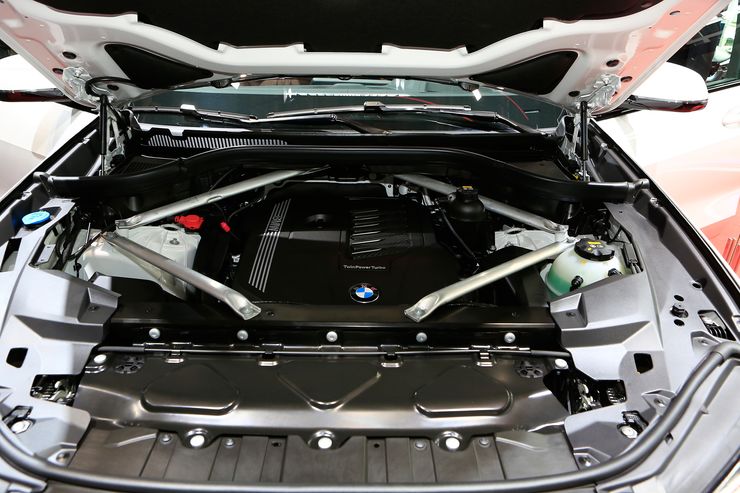 The Q7, meanwhile, faces some obstacles related to the conversion to the new WLTP testing cycle which made Audi cut-off the engine range to only two diesels: two V6 turbos with three liters of displacement and 48-volt mild hybrid, which provide either 231 hp and 500 Nm or 286 hp and 600 Nm. A gasoline engine is currently absent from the line-up and even the mighty SQ7 TDI with 435 hp and 900 Nm is currently gone. 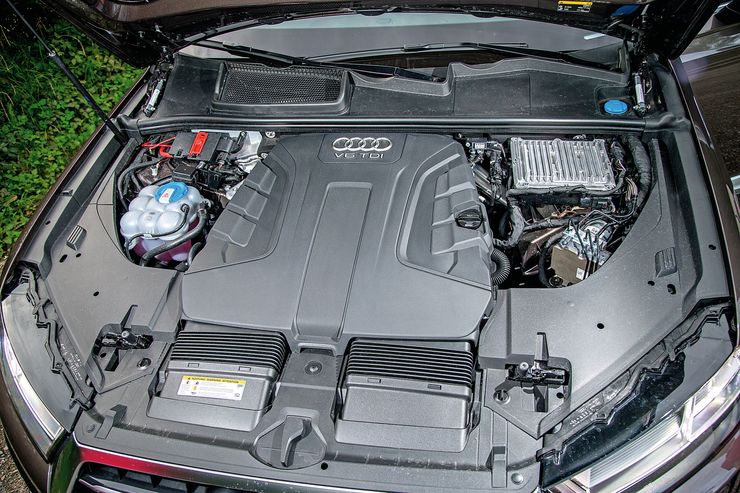 Also the norm today in the luxury SUV class: air suspensions. Yes, all three models offer the option of such suspensions and, on request, the pneumatic system is also active on both axles on the BMW, where the electronics also individually take care of each individual wheel. Both the Q7 and X5 can be specified with rear-wheel steering for extra costs, which improves both their curve talent and their maneuverability. The Mercedes does not offer this option, but it does kick back with its so-called “E-Active Body Control”, an active, hydro-pneumatic suspension, which is coupled with the 48-volt electrical system. This allows spring and damper forces to be controlled independently for each wheel and roll, while the pitch and stroke movements are minimized. In addition, the chassis takes into account the driving and GPS data and thus reacts in advance to what is happening on the following section of the route. Another plus: with the Curve function, the new GLE leans into a curve similar to a motorcyclist or an ICE train. 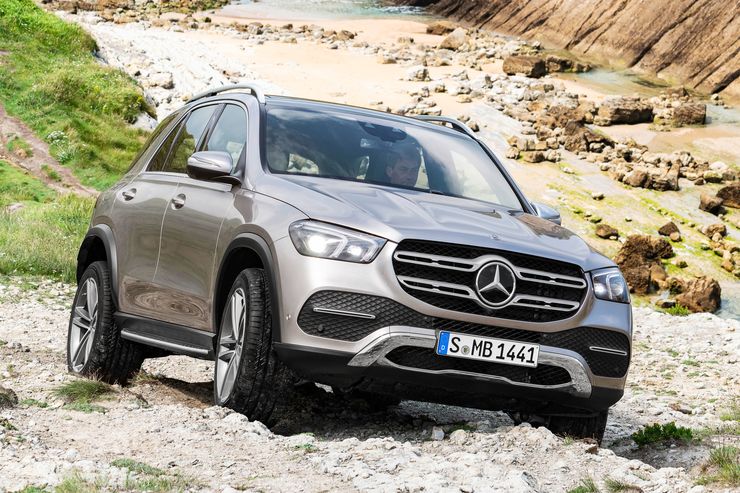 What about the four-wheel drive system? It allows the torque distribution to be fully variable via electronic multi-plate clutches. Depending on the situation, both axles get between zero and 100 percent of the driving force. Also, the off-road package brings with it the transfer case, reduction ratio, single-wheel control via touchscreen. The body level is automatically raised and lowered, which changes the pressure of the wheels on the ground and thus improves traction. Although the X5 has improved in the terrain department, its focus is clearly still on the road performance with rear-wheel-drive biased all-wheel drive system and differential lock. It is similar with the Audi, which is limited in terms of all-wheel-variability from the outset: normally, the torque is split in the ratio 40:60 between the front and rear axles. The front axle can get as much as 70% and the rear axle 85% of the power. That will be enough in most cases, but only the Mercedes seems to be ready for intense off-road adventures. 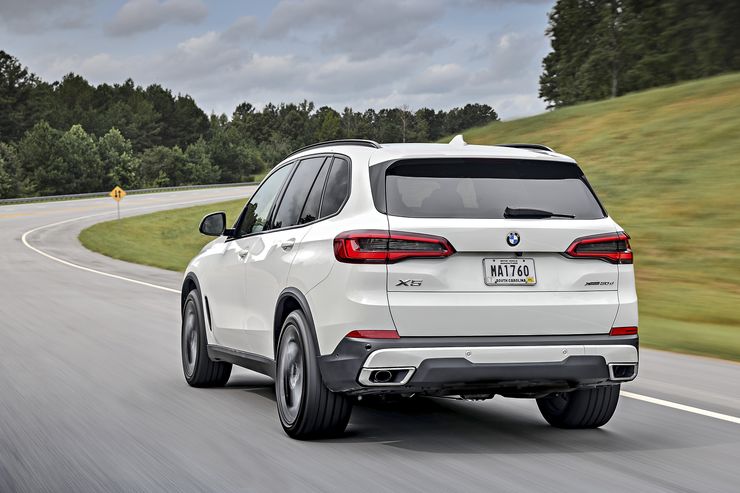 Mercedes also offers a bit more than the Audi and BMW in therms of assistance systems. It becomes interesting when looking at the individual functionalities of traffic jam assistants. Braking, acceleration and steering assist is available for all three SUVs, even when changing lanes. But only the Mercedes can detect traffic jams early and brake automatically in time and only the GLE can drive away again automatically one minute after standstill (BMW: 30 seconds) and plans an “escape” route without the driver’s intervention. The new Mercedes-Benz GLE also has by far the largest visible are for the head-up display here: 45 x 15 centimeters versus BMW 18 x 9 cm and Audi: 20 x 8 cm. 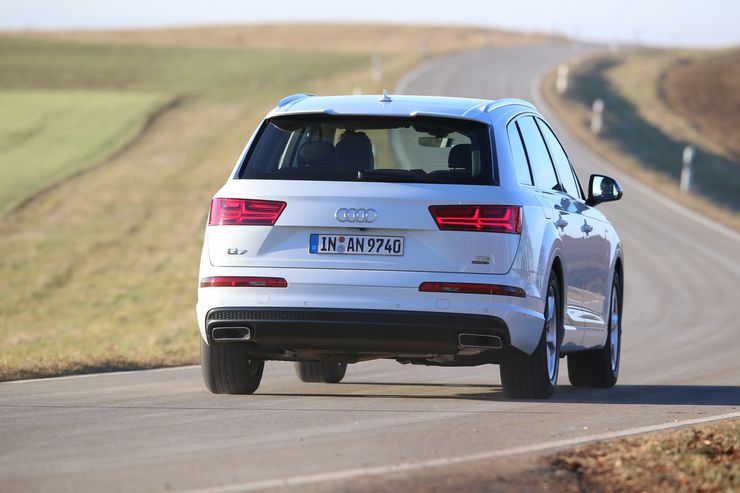 When prices are concerned, the Mercedes should top its opponents. At least equipment adjusted, because the base price should be somewhere between that of the Q7 (64,100 euros for the 45 TDI with 231 hp) and X5 (69,200 euros for the xDrive30d with 265 hp) – all estimates for Germany. 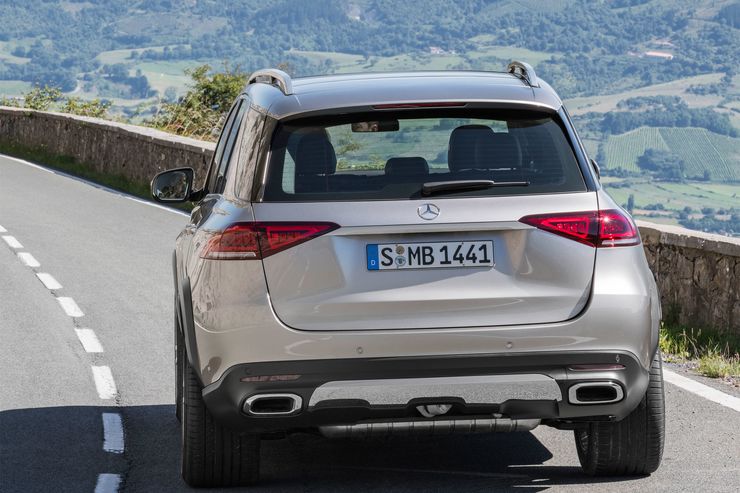 Conclusion
The relatively higher price of the Mercedes seems justified, after all, it comes up with a technical armor that surpasses even the not just anti-technology X5 and Q7. Especially the chassis, the electronic driver assistants and the MBUX infotainment system arouse interest. It would not be surprising if the new GLE becomes the most comfortable, all-terrain and best-connected SUV in this trio.

In terms of space, the larger Audi is likely to be in the lead, and he is fighting for dominance in the categories of driving dynamics and price-performance ratio with the BMW. The Munich is currently the best positioned engine side. At least until Mercedes adds its diesel and plug-in hybrids. Then the eternally young and always interesting fight really starts.