How do you feel inside the new Mercedes S-Class W223 ? How does the MBUX system work? We got inside and played with all the gadgets. Here are our impressions.

The 12.8-inch OLED screen has an exceptional resolution of 1888 x 1728 pixels and looks much larger than it really is. In addition, its integration in the center console in portrait format is much more elegant than the Tesla Model S. The screen will be integrated in the same position in the Mercedes EQS.

Although the layout is to some extent similar to that of the Tesla Model S, the impression of quality is clearly superior in the Mercedes S-Class W223. And for comparison, the interiors of the BMW 7 Series or Audi A8 look outdated, although we cannot say that they are technologically outdated in any case. 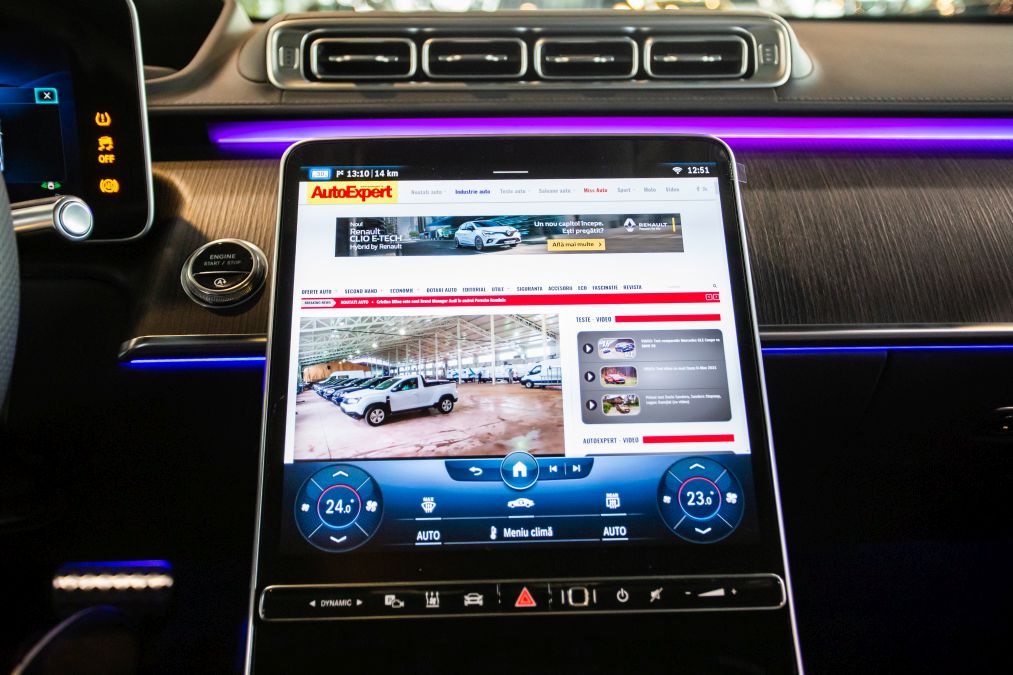 Although the screen occupies the entire center console and part of the central tunnel, the Mercedes S-Class W223 offers the feeling of a very airy interior. The lack of physical buttons gives it a high-tech look and even the buttons at the base of the OLED screen are digital with haptic feedback.

It is important to note that there is no anymore controller or touchpad that I have criticized in other Mercedes models. The access to the multimedia system is done through a mini touch just like the ones from the former S-Class steering wheel, there is a dedicated button for drive modes and the air conditioning menu is always displayed at the bottom of the screen so that no matter what menu is displayed you always have direct access to air conditioning controls.

The steering wheel is similar to the one presented on the E-Class facelift and has two parallel arms on each side. The mini touches on the steering wheel arms have been replaced with two tactile surfaces that do the same thing. To the one on the left you operate the display modes of the on-board indicators and with the one on the right you have access to the multimedia system.

Even if the bottom of the screen is assigned to the air conditioning menu, there is a space of about 8-9 inches for the rest of the menus and you can practically surf the internet just like on an 8-9 inch tablet. You can connect to the internet either direct through the SIM of the car or by making a hotspot with the phone and in both cases the speed is very good.

Optional 3D indicators are quite expensive (1148 euros) and the image is exactly like a 3D TV without special glasses. At first glance it seems a little tiring until you get used to it.

Much more spectacular is the new MBUX Augmented reality Head-up Display which costs a small fortune (3468 euros). This head-up display supplements your field of vision with virtual cues without distracting you.

For example, large direction arrows hover over the intersection where you need to turn.You know immediately what to do. Compared to the classic head-up display, the display area significantly enlarged. You can see the colored overlays at a virtual distance of ten meters in front of the vehicle. This directly tangible information merges seamlessly with reality.The voice assistant Hey Mercedes is even more intelligent. The news is that it can be controlled from the rear and you can give several consecutive instructions like for example “It is too hot and please call Carla”.

Mercedes says it understands 27 languages but still hesitates when you ask MBUX to take you to a navigation destination expressed in less widely spoken languages. Instead, understand all the names in the phone book.

The graphics of the on-board indicators have also been completely changed and can be displayed in 7 modes: Decent, Sporty, Exclusive, Classic, Navigator, Assistance and Service.
On the former models, the Sport mode had a display in yellow letters unsuitable for the idea of sportiness. Now the Sport mode has a red background display with the digital speedometer in the center and indicators for torque and power on the side. 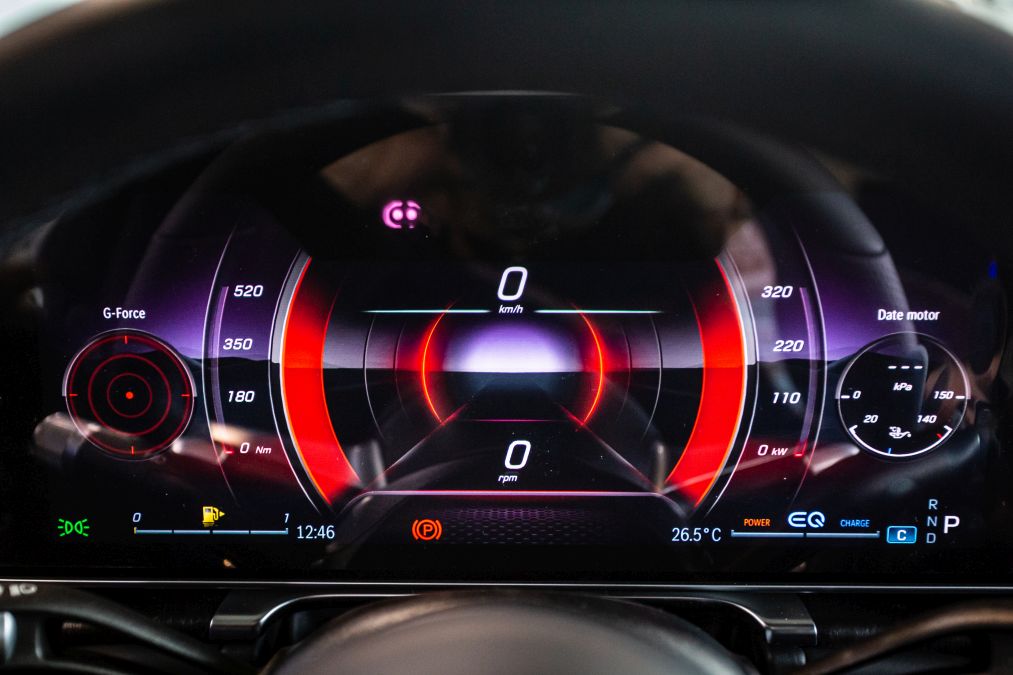 The intensity of the ambient light corresponds to the promises made by Mercedes. It is so strong that it is very visible during the day as well as at night. Mercedes said that the ambient lighting is ten times brighter than before.

Ambient light is also related to assistance systems.For example, Active Blind Spot Assist warns of an impending collision with a red light animation. Also with the exit warning function of Active Blind Spot Assist, a red visual warning is given in the area of the door where the risk of colliding with traffic approaching from behind, including cyclists, has been identified if exiting the vehicle.

The lumbar support is adjusted not only in depth but also in height completely electrically. There are no less than 10 massage programs available with active multi-contour seats (2320 euros plus 991 for the ventilation).

The test car was equipped with the First Class package for the rear seats (3248 euros) which comes with a center console and turns the rear area into a mobile office. Only with the First Class package you can order the 7-inch tablet in the back (580 euros), memory for the rear seats (electrically adjustable rear seats cost 1809 euros and ventilation other 991 euros), rear air conditioning (1322 euros), while the  rear entertainment system with two 11.6 inch screens costs an extra 3648 euros.

Mercedes-Benz has systematically focussed on the rear for the new version of its flagship model. An example: passengers in the rear have the same extensive Infotainment and comfort features as the driver and front passenger, and can also watch films or surf the internet. They have access to up to three touchscreens and a variety of intuitive control options such as the voice control assistant “Hey Mercedes” – real multi-seat entertainment.

A pleasant sensation for the rear passengers is also given by the seat belt with integrated airbag which feels thicker and fluffier to the touch (684 euro). In the rear in the  long version there is so much space that even if you order the Executive seats at which the back of the seat tilts up to an angle of 43.5 degrees (on the front passenger side) you still sit comfortably. 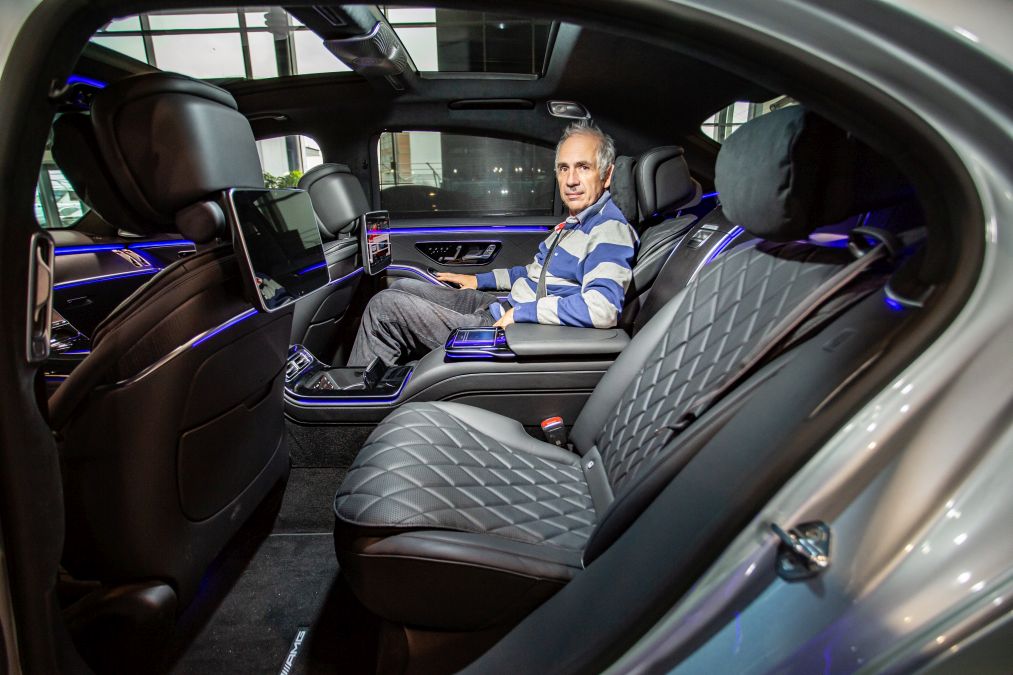 It is obvious that the Mercedes S-Class W223  is a trendsetter and the new interior is amazing. It is not only spectacular and excellent quality but the ergonomics are impeccable. Although it offers so many facilities, the operation through menus is simple and intuitive and not at all complicated.