For Mercedes-AMG, this Autumn’s IAA 2017 Frankfurt motorshow is the highlight of the company’s 50-years anniversary. The biggest birthday gift is the Project One Mercedes-AMG Project One hypercar, which comes with a Formula 1 engine and four additional electric engines, peak power going beyond 1,000 bhp. LIVE REPORT.

The internal combustion engine of the Mercedes-AMG Project One hypercar corresponds one-to-one to the unit from the Formula 1 car. The most extreme AMG supercar gets its power from a 1.6-liter V6 turbo gasoline motor. Customers will be able to say of themselves: I drive a car with an F1 engine. As in the Formula 1, two electric engines come as part of an advanced KERS system, able to amplify the power of the combustion unit – these are called MGU-H and MGU-K.

The MGU-H operates both as an electric drive with an output of 80 kW, able only to activate the turbo wheel in the exhaust stream, in order to eradicate the turbocharger, as well as a generator. It sits on the turbocharger shaft in the middle of the hot V. The shaft connects the compressor wheel, which sits at the front of the engine, and the turbine in the exhaust flow. Excess exhaust pressure is used by the MGU-H as a generator to transfer either directly to the second electric motor, the MGU-K, or to transfer energy directly into the batteries.

The MGU-K, which generates current in the traction mode, performs as in the Formula 1 with 120 kW – thus 163 hp. The electric machine is directly connected to the crankshaft and can also drive exclusively the rear axle. 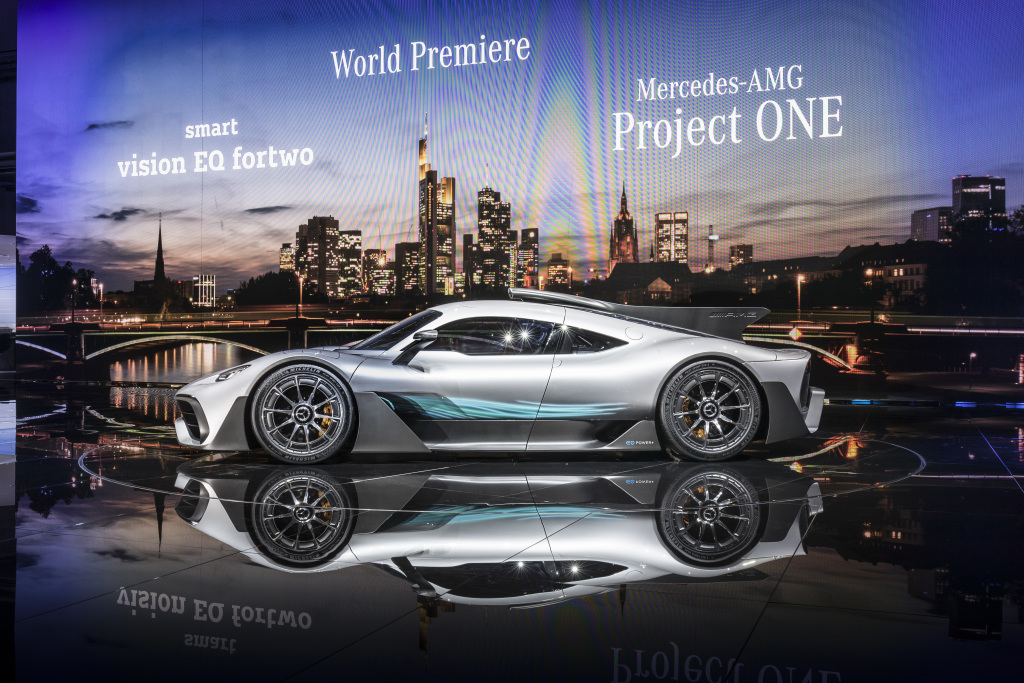 On the front axle, Mercedes-AMG stakes two other electric motors. In principle, there are two additional MGU-K with 120 kW each which also provide torque vectoring on the front axle. With the AMG-Hypercar it will be possible to drive purely electrically. For this purpose, the center motor is decoupled together with its connected two electric engines. The two E-engines on the front wheels are supposed to carry the Project One for about 25 kilometers 100% electrically.

The battery pack is mounted under the underfloor. Construction, cells and packaging correspond to the Formula 1 counterpart. Difference: The storage capacity is quadrupled for road use. The batteries are in the Formula 1 between 20 and 25 kilograms. This is what the regulations stipulate. The complete drivetrain must weigh at least 145 kilograms. The basic data for the Hypercar are different: about 100 kilograms for the larger batteries, about 420 kilograms for the entire powertrain. This is based on the overall weight at which Mercedes-AMG is still working, targeting a performance to weight ratio of 1: 1.

“The highly efficient and powerful Formula 1 world champion hybrid powertrain coupled with a full-electric wheel-selective front-wheel drive concept produces a combined system performance of probably more than 1,000 hp (735 kW)”. Can the new Hypercar accelerate faster than the Bugatti Chiron, which gets to 100 km/h in 2.5 seconds? “On this scale, we will be close,” an engineer says. The Hypercar is to shine through breathtaking driving dynamics. 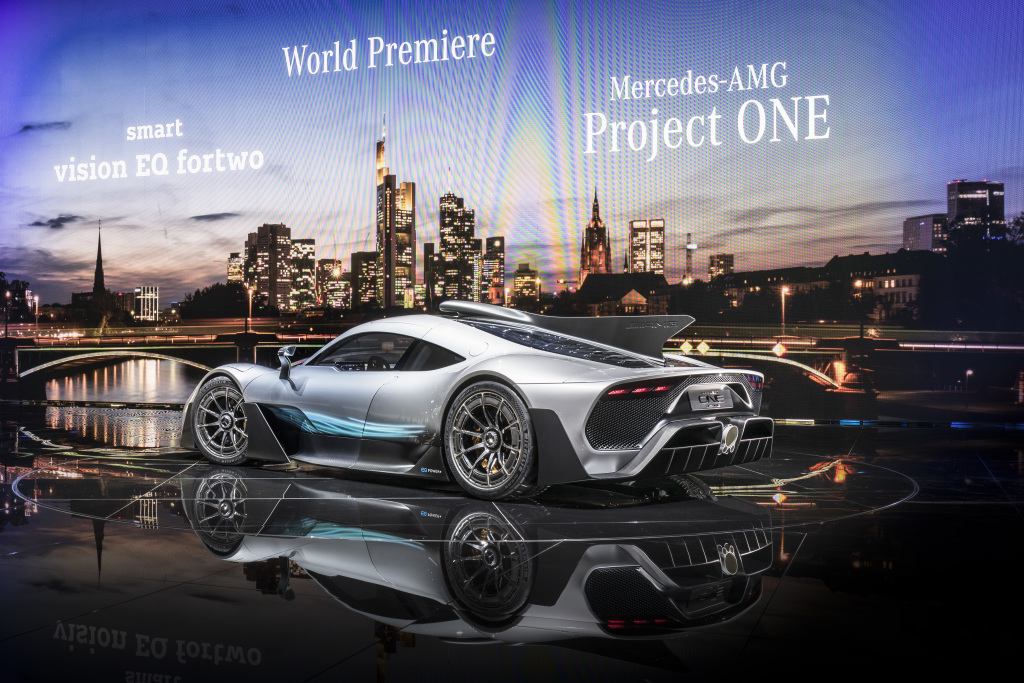 Mercedes Project One with extreme performance

The Formula 1 racing car comes with an output of around 950 hp at maximum speeds which settle for a maximum of 13,500 rpm for efficiency reasons. The performance has to juggle with a vehicle weight of 728 kilograms (including the driver). Only: the engine alone takes around ten minutes to heat, and the required fuel is not available at any public filling station. So how is this technology to be trimmed only to a certain extent on everyday use?

Finally, one of the most important development goals is that the hypercar is homologated for all relevant sales markets, ie it can be moved in public road transport. With a running distance of 4,000 kilometers for which an F1 drive is designed to work, a Hypercar customer is hardly likely to be satisfied either. Nevertheless, AMG Managing Director Tobias Moers promises “extreme efficiency with extreme performance”. In the super sports car, the V6 mid-engine, which is to achieve a combustion efficiency of 43 percent, is set to rev until 11,000 rpm. So that it can create runs of 50,000 km. The internal combustion engine is then revised. For road use, the engineers have to postpone the exhaust fumes and dampen the noise.

Mercedes-AMG does not accept the eight-speed transmission from Formula One. “It is limited by the running performance. In addition, our customers are accustomed to a different sound comfort, “says Philipp Eckert, who is part of the AMG development team for the Hypercar. The Affalterbacher develop a completely new eight-speed automatic transmission. A dual-clutch transmission would not withstand the loads of the drive, says it at Mercedes-AMG, so an automated manual gearbox will be used instead.

A total of 275 copies of the AMG Hypercar will be built. It is already believed the model is sold out. With this number, “we are hard on the production capacity limit”, says Moers opposite British media. And, “it’s an impressive car, there’s nothing like it on the market.” Impressing is also the price charged for the Project One: 2.275 million euros plus taxes. The first customers are expected to come to enjoy their toys in 2019. 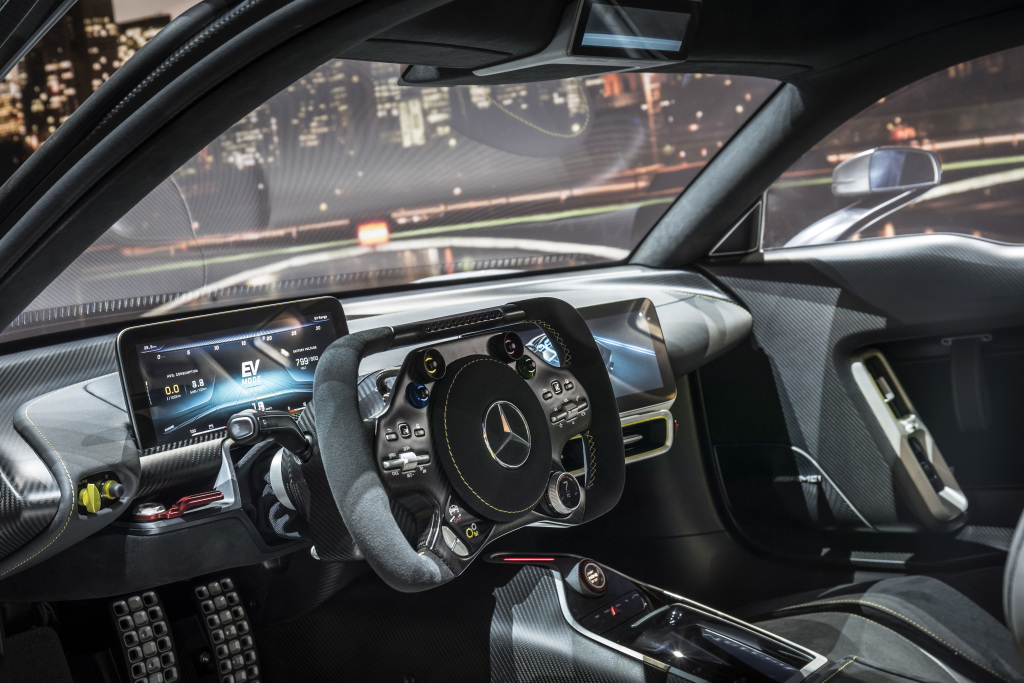