The Bahrein Grand Prix debuted with a horror crash. Romain Grojean’s racing car slammed into the side barrier and burst into fire. Half of the car, with the driver inside, went straight through it. Less than 20 seconds later, Grojean emerged from a fireball. Track marshals sprayed him with a fire extinguisher. The Mercedes-AMG E 63 S 4MATIC+ arrived at the scene ten seconds after the crash and helped the driver jump over the fence.

The medical team, Ian Roberts and Alan van der Merwe, helped him jump over the barrier and led him to the ambulance. “In 12 years, I have never seen that much fire in 12 years”, the driver of the Medical Car told reporters. 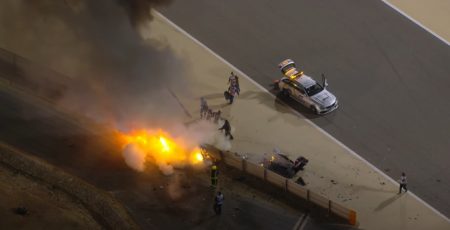 He was airlifted to a military hospital with burns on his back and hands, but conscious. The X-rays showed he suffered no fracture, even though his car slammed into the metal barrier and sliced in two at over 220 km/h. A few hours later, from his hospital bed, Romain Grojean showed up smiling to thank the medical teams at the track and at the hospital. The French admitted that the halo saved his life.

“I wasn’t for the halo some years ago. But I think it’s the greatest thing and without it, I wouldn’t be able to speak to you today.”

Lewis Hamilton felt relieved that Grojean was all right

The race was suspended following the crash. For several minutes, until the news of Romain Grojean’s emerged, the drivers and technical staff were in a state of shock. TV cameras even showed some of them with tears in their eyes. Lewis Hamilton took it to Twitter: “I am so grateful Romain is safe. Wow… the risk we take is no joke, for those of you out there that forget that we put our life on the line for this sport and for what we love to do.” 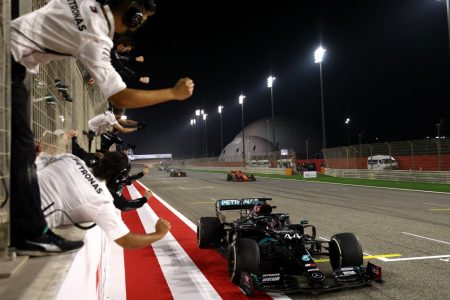 But the race resumed with another serious crash. Lance Stroll’s car capsized on the track. The Mercedes-AMG E 63 S Coupe 4MATIC+ once was once again on duty.

Once the Safety Car was out, the World Championship title holder, Lewis Hamilton, started building his lead. A lead he was not going to lose. Max Verstappen from Red Bull Racing finished second. With three laps to go, while Sergio Perez was preparing to go up on the podium, his engine gave in on him and burst into fire. Thus Alexander Albon fom Red Bull Racing accompanied his team mate on the podium.