Lewis Hamilton storms to victory, Rosberg under investigation in Silverstone

Under the threat of having team orders imposed on them, Lewis Hamilton and Nico Rosberg had a clean race in Silverstone, after leaving from the first row of the grid. The world champion set off like a bullet once the Safety Car was out and was impossible to catch all the way to the end.

15 minutes before the race, it seemed that apocalypse had crashed over the Silverstone circuit and all cars switched to full wet tires. It was a start behind the Safety Car and from the very first lap, Lewis Hamilton started complaining the Mercedes-AMG GT S was driving too slow and was inches away from overtaking it and almost hitting it in the 5th lap. 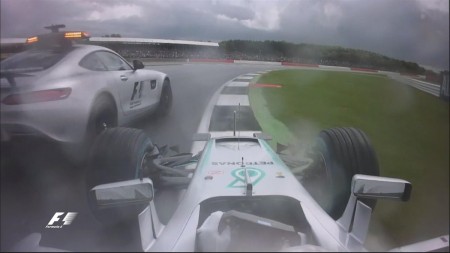 One lap later, the Safety Car was out and everyone down from Kimi Raikkonen pits to switch tires. Mercedes-AMG PETRONAS manages to pit both drivers and still get them back ahead of Verstappen.

Pascal Werhlein is the first victim of the aquaplaning, ends up in the gravel in turn one and is first to retire. 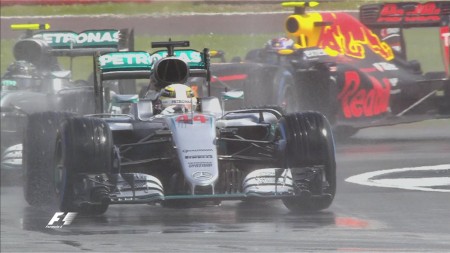 The Flying Dutch is faster than anyone else on the racetrack and is inching closer to Nico Rosberg, with the German only 2.5 seconds ahead and told he must take care of the current tires until the track is ready for slicks. Lap 17 is the one where the Mercedes-AMG driver sees kid Verstappen of Red Bull overtaking him in a blink, in an area that seemed close to impossible for such maneouvres.

It is pure drama in the pitlane. Jolyon Palmer loses a wheel meter after changing tires. Mechanics pull him back to wheel him again. The incident goes under investigation and Renault gets a 10-second penalty releasing the car in an unsafe condition.

Sebastian Vettel dances on the racetrack after an aquaplaning, but sets into the right direction after a spin. Keeping the cars on the track seems to be the hardest job for Ferrari, with both drivers hardly holding the control of the wheel. Which is just as hard for Alonso. The Spaniard manages to come out of the gravel while the spectators applaud.

The youngest driver in Formula 1 almost loses control of its Red Bull in lap number 23, which helps Rosberg come closer, especially after the German hits a new fastest lap.

Alone at the front, Hamilton loses focus and goes out in Abbey. Luckily there was pavement there for him. 6 seconds behind, Rosberg is all over the back of the Dutch and finally overtakes him in the 39th lap. In front of the monitors, the motorsport boss Toto Wolff – recently nicknamed Terror Toto after threatening with team orders – happily bursts into applause. 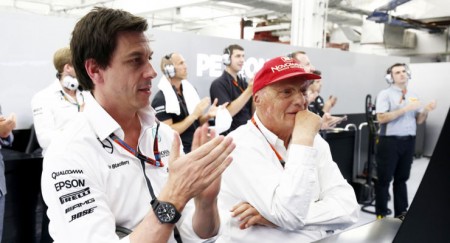 Hamilton is now starting to see his nightmare rival in the rear view mirror. But Rosberg gets into trouble and loses precious time. He is told to avoid 7th gear and shift straight from the 6th to the 8th. Verstappen is coming closer with every lap. At the Mercedes-AMG PETRONS office, Niki Lauda and Toto Wolff are holding their heads in the palms of their hands. They have already provided data to their driver that they were prohibited to provide and they know it. The race officials are investigating the radio messages.

Hamilton gets his fourth victory on English soil, reaching the record of Nigel Mansell. The world champions jumps over the fence, runs to greet his fans, throws himself over them and then starts dancing with a cameraman.

There is much confusion on the podium, with Nico Rosberg still under investigation, not yet sure if he will keep his position and points or not. The youngest driver in Formula 1, Max Verstappen, is in the third spot.

Next stop: Hungaroring in Budapest in two weeks time!

* Provisional results. Note – Vettel had 5s added to his race time for forcing Massa off track and Nico Rosberg is still under investigation for team radio data.