Lewis Hamilton was unstoppable at the Sao Paulo Grand Prix. It was a weekend of madness for the seven-time World Champion. He won the race despite the penalties.

Lewis Hamilton got the best time on Friday for the sprint race. But he was disqualified for an issue at the tail wing. Max Verstappen also got a $50,000 fine for inspecting the item after the session. Therefore, the Brit started the sprint race from the last spot on the grid, while teammate Valtteri Bottas started second. Max Verstappen started first, but the Finn was the right man at the right time and achieved the best time. From the 24th, Hamilton finished 5th. But he had to deal with a 5-place grid penalty for the engine shift. So he was to start the SaoPaulo Grand Prix from the 10th. Bottas was in pole position. 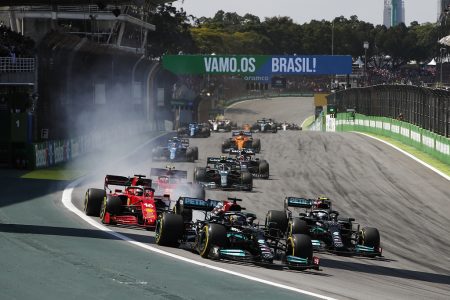 On Sunday, Valtteri lost his advantage, as Red Bull’s Max Verstappen passed him right after the lights went out. Way back, Lewis Hamilton was passing driver after driver, inching closer to his target: Max Verstappen. Seventeen laps later, he was already in P2, hunting Max and trying to lead his teammate towards a double podium.

After a second pit stop, Valtteri seemed discontent: “I think we gave up an easy 1-2”, he told his team. From the lead, Lewis was asking his team where Valtteri was. “Good job!”, he said when he heard his teammate was in the P3.

On Lap 48, Verstappen tried to defend his lead and turned wide in Turn 4, almost sending off Lewis. But Lewis was not frightened by the move and, a lap later, he charged once more. Same spot, this time, a different result. From that moment on, there was no doubt about the winner in Brazil. 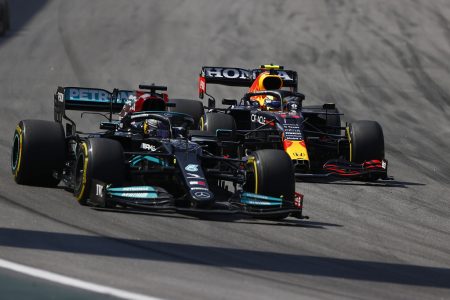 “If he’s gone from last to fifth in 24 laps, he should have three wheels on his car to make it a bit harder for him!”, Lando Norris joked after the race.

Lewis finished more than 10 seconds ahead of Max Verstappen, cutting his lead in the championship from 21 to 14 points. Valtteri Bottas finished third, in front of Sergio Perez. The Mexican also got the Fastest Lap point, snatching it from Hamilton. He had pitted for softs on Lap 70, targeting that particular point.

“I think we’ve just had many, many punches in the face this weekend with decisions that could have swung either side against us or for us. It’s just something that I’m just angry about and I will defend my team, my drivers to what comes. I’ve been always very diplomatic in how I discuss things, but diplomacy has ended today,” Toto Wolff threatened.

With “best-ever performances” in Brazil, Mercedes is getting ready for the Qatar Grand Prix taking place next week. Mercedes leads the Constructors Standings with 11 points ahead of Red Bull.