Lewis Hamilton disadvantaged by the subjective interpretation of the regulation

The 2021 Formula One World Championship ended in the FIA ​​offices and not on the race track. Max Verstappen was crowned world champion after four and a half hours of discussion.  Lewis Hamilton has been put at a disadvantage by regulation, which leaves FIA race director Michael Masi too much freedom.

The last GP of the year was marked by many controversial decisions.
Max Verstappen started from pole position but had a bad start and immediately lost the first position in front of Lewis Hamilton. But Verstappen came back in the same opening round and tried to overtake Hamilton.

But Verstappen’s maneuver was dangerous. Max overtook on the inside, after which he did not keep his track and went out to the outside of the corner to the edge of the track. It was obvious that Max was trying to cause an accident that would take them both out of the race. Thus, Max would have won the world title because in the points tie he had more victories than Hamilton: 9 vs 8 for the British.

Hamilton managed to avoid the accident which took him off the track and on the return he cut a turn. Red Bull officials put pressure on Masi to demand that Hamilton relinquish his place to Verstappen.

But in this case, Masi was right: “Max pushed Lewis out and Lewis gave back the time he gained by taking a shortcut.” Then it was quiet until lap 53.  But in lap 53 fate struck again and Nicholas Latifi entered the parapet with his Williams in turn 14. Being a fairly narrow area with many debris scattered on the circuit, the intervention of the safety car was absolutely necessary.

Thus, Lewis Hamilton’s 11.9-second lead disappeared. At the time, Mercedes made a strategy mistake, and although Hamilton asked on the radio “if it’s not too risky to stay on track with used hard tires,” his engineer said no.

Instead, Verstappen risked everything and went into the pits putting on a set of soft tires. Because the distance to the 3rd place was big, Verstappen came out of the pits also in the second place while Hamilton was left with the used hard tires with which he had already covered 44 laps.

The question was whether the circuit would be cleaned in time or the race would end behind the safety car in which case Hamilton became world champion. But Red Bull team boss Christian Horner put pressure on Masi by asking the radio to follow rule 48.12. This means that the lapped drivers would be asked to overtake the top.

Masi responded 4 minutes later but addressed only five delayed drivers Lando Norris, Fernando Alonso, Esteban Ocon, Charles Leclerc and Sebastian Vettel. The other three late, Daniel Ricciardo, Lance Stroll and Mick Schumacher were far behind and remained where they were. It would have taken them too long to get on the same lap with the others.

And in the last round, the safety car left the track. It looks like a racing speed final was wanted. Verstappen overtook Hamilton in a hairpin and became world champion.

The first was that behind the safety car, Verstappen would have overtaken Hamilton. “That happens again and again when braking and accelerating before the restart and is not to be seen as an overtaking maneuver behind the SafetyCar,” said Masi. This appeal was rightly rejected.

The second complaint was that only five of the eight late cars resumed their place in the same lap with the others. And that the safety car should not leave the track until the next lap after the last car out of the five delayed has resumed its place. And that would have meant that the race would have ended up behind the safety car. 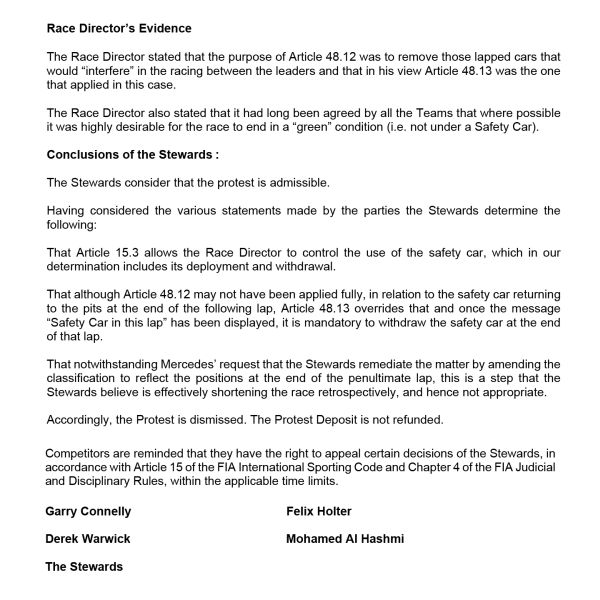 According to the current regulations, the FIA ​​race director has full authority over the safety car according to Article 15.3. So it’s up to him when he decides to get in or out of the safety car.
Masi’s report from 18.31, when he informed the teams about the end of the neutralization, was decisive. The message “Safety car in this tour” makes this command mandatory, whether or not it violates the rule.

This subjective decision has practically decided the title and it is a major shortcoming of the regulation that an important decision is left to one person and there are no clear rules.