Lewis Hamilton reveals the agony and ecstasy of this season, after winning the world championship in one-hour documentary that will be repeated on Sky Sports F1 on Sunday at 4pm.

The special programme was broadcasted on Monday, 15th December, at 11 pm and it will be repeated at 4pm on Sunday on Sky Sports F1. In the special documentary, Lewis Hamilton relives the tense moments and the overall joy that he experienced in the 2014 season. Hamilton reveals every moment of the 2014 campaign, from his pre-season preparations to the highs and lows of his fight for the title with teammate Nico Rosberg and, finally, the Abu Dhabi Grand Prix where he won his second championship. “From Bahrain Nico did one thing, Barcelona I did one thing, and then Nico took it another level in Monaco which made it difficult for us”, Hamilton told Sky Sports F1 during the documentary “A Champion’s Story”. 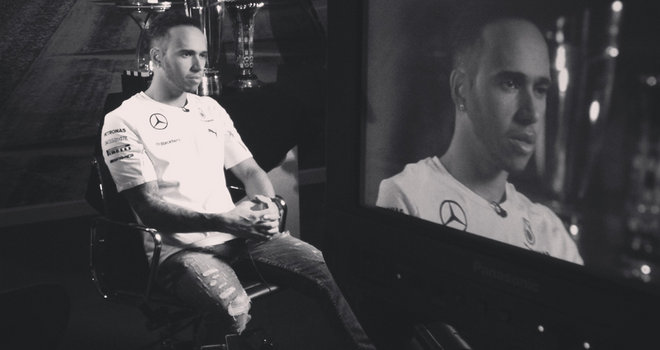 The incidents Hamilton is talking about in Bahrain and Spain where both drivers used engine modes banned by the team to give them more power as they fought for victory.

Furthermore Lewis Hamilton reveals how Rosberg brought the increasing tensions from the Mercedes team to a whole new level in Monaco and how his own engineers believed that he had no chance at the title anymore, being forced to retire from the Belgian GP and his ambition to carry on with racing in order to win in Abu Dhabi.

Lewis Hamilton was crowned on Sunday BBC Sports Personality of the Year, posting a “thank you” video on his Facebook page, to all his supporters.