Things are going great for Lewis Hamilton. After winning the Formula One driver’s championship last year, he’s off to a great new season as well after winning the Australian Grand Prix. How did he celebrate his victory? Well, he bought himself a new LaFerrari.

The F1 champion bought a limited edition Ferrari for a staggering price of $1.5 million. “LaFerrari” is a hybrid supercar that reaches a maximum speed of 350 km/h and it can accelerate from 0 to 200 km/h in under seven seconds and to 100 in less than 3 seconds. The supercar is powered by a 6.2 litre V12 engine coupled with an electric engine that uses KERS technology to boost power and torque. The purchase was also confirmed by Mercedes team boss, Toto Wolff, together with a spokesman of Mercedes-Benz Motorsport. “Of course Lewis has had contact with Ferrari, don’t you know? He just bought a Ferrari, indeed, LaFerrari.” He also admitted that there is no problem for Mercedes. 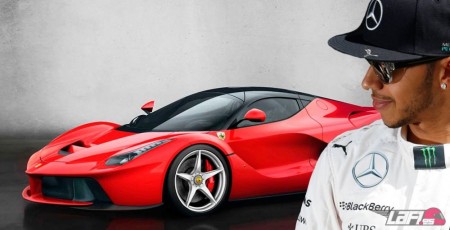 In the meantime, Hamilton is training for the second race of the Formula One the Sepang International Circuit in Malaysia from March 27 to 29 and after winning in 2014 the Malaysian Grand Prix he hopes for another victory this year.

“I feel ready for anything right now and the aim is to repeat last year’s performance,” said Lewis Hamilton in a statement shared on Mercedes’ website. “It took me eight attempts to win this race when I finally made it to the top step last year and I don’t plan on waiting that long again.”