Mercedes-Benz 500 E a.k.a. “the wolf in sheep’s clothing” crushed its Bavarian counterpart back in the 90’s. Built in relatively limited numbers between 1994 and 1995, the top-of-the-range model in the 124 model series offered sports car credentials packed in the body of a limo.

True, not a regular run-of-the-mill saloon, but a quite devilish looking creature. The 500 E styling signature were its flared front and rear wheel arches with larger front bumpers and twin outlet exhaust system. Finished off with large alloy wheels and graced by an equally monstrous 5.0-liter V8 engine, Mercedes-Benz 500 E offered 326 HP and could reach 0-100 km/h within 6.1 seconds. Top speed was electronically limited to 250 km/h. 25 years later, the current E 500 offers 408 PS and is just a little over a second faster than the W124 500 E.

Both its engine and its four-speed automatic transmission were lifted straight from the 500 SL. Not without significant improvements, though. The 500 E was in fact the first-ever car to feature a “standard deck” engine, mounted 16.5 millimetres lower here than when it made its debut in the 500 SL. One and the same crankcase used for both the 4.2 and the 5.0-litre unit while shorter connecting rods ensured that the bore-stroke ratio remained the same.

Another novelty at the time was the Bosch LH-Jetronic injection system, with electronic control and air-mass sensor. From October 1992 the engine output was lowered slightly to 320 hp (235 kW), in order to reduce both fuel consumption and pollutant emissions. 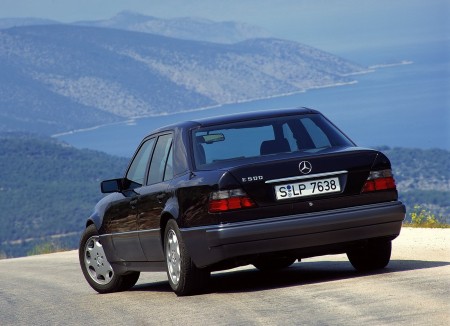 In a strange twist of events, the 500 E was in fact built by Porsche. The sports car manufacturer was brought on board by Mercedes-Benz at a very early stage in order to boost the company’s own somewhat stretched development capacity. The bodyshell was painted at the Mercedes-Benz Sindelfingen plant, while the final assembly of the components supplied from Sindelfingen and Untertürkheim was undertaken by Porsche in Stuttgart-Zuffenhausen.

Production was limited, ensuring the 500 E’s status as one of the most coveted fast limos in Mercedes’ history. Only 10,479 units saw the daylight until 1995, a small figure that also includes the E 60 AMG – The Hammer. The price was comparatively eccentric. At launch, the 500 E cost 134,520 deutschmarks or more than twice as much as a 300 E. So it is perhaps hardly surprising that the 500 E/E 500 young classics are closely sought after by their lucky few owners.