Stronger Than Time – Mercedes started promotion of the new G-Class

It really is “Stronger than time”, as the slogan of the campaign says of the off-roader recently launched in Detroit, the Mercedes-Benz G-Class. The SUV is the focus of a campaign that brings fans closer the fascinating world of the invincible former military vehicle, that has been around for 40 years.

The global campaign debuted on January 15th and it is primarily based on digital media and social networks. Striking images and videos depict the strong points of the new G-Class online and off-line. 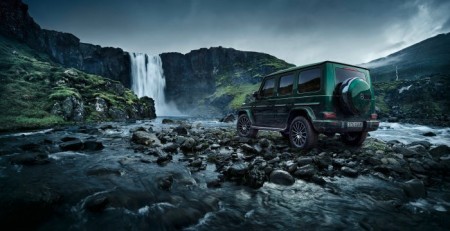 Located right at the https://www.mercedes-benz.com/strongerthantime, the digital media campaign is based on three different themes: “Amber Rock”, “Green Lava” and “Blue Night”.

The campaign includes 35 motifs and a 2:45-minute video with three cut-offs, accompanied by strong images and dramatic music, as the Master G radiates self-composure and supreme mastery. Rich, metallic blue tones showcase a modern, cool urbanity in the “Blue Night” theme, with a sensation intensified by the lights of the city reflected at dusk, on a rainy night. 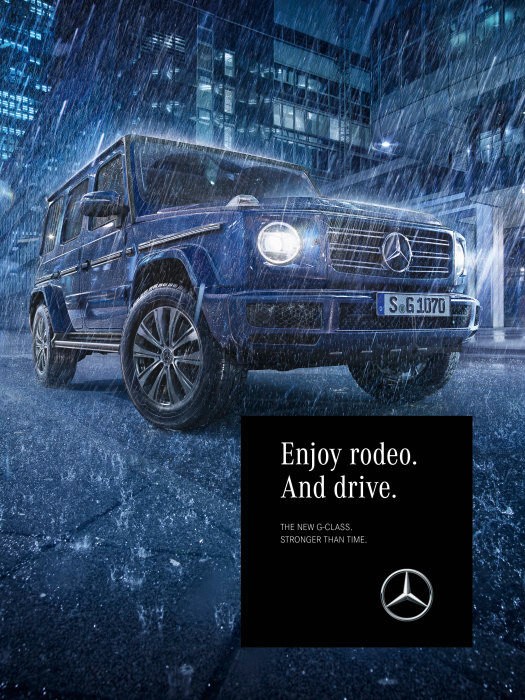 Part of the massive campaign, there is the amber block of synthetic resin, displayed at NAIAS. 44.4 tons of resin inclosing the first generation of the civilian vehicle that saw the light of day back in 1979, showing its timelessness and intact preservation through the model’s history, not losing its DNA.

The printed media campaign includes varied images showing the G-Class as the longest lasting model of the company’s portofolio, suggesting the multiple personality of the car. “Amber Rock”, “Green Lava” and “Blue Night” relate to off-road abilities, design and onroad performance, integrating natural elements such as rock and lava formations, as well as water, all being “stronger than time”, as the G itself.