The Mercedes-AMG GT R Black Series shows up online long before its official reveal. The car has surfaced on social media, revealing a head-turning look.

Fans have been waiting for this moment ever since the last of the Black Series model, the SLS AMG, that came to life in 2012. Ever since, Mercedes-AMG has planned its next step. The next street-legal race car was not going to be thrown out there without a solid plan.

Speed enthusiasts have been following the development for months and months. The car has often shown up in photo galleries, spied while lapping the famous Green Hell of Nurburgring. Why the Nurburgring? It needed a place where it would be able to throw down on the tarmac all of its track-focused performance.

And now, after months and months of watching the monochrome camouflage, the Mercedes-AMG GT R Black Series breaks cover in a photo gallery on social media. 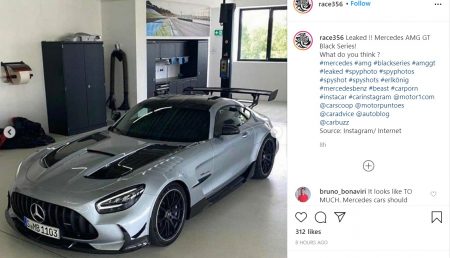 It was only logical that the model gets the Panamericana radiator grille. The photos reveal that it covers more surface at the front end of the car. It is also obvious that the gap between the black vertical slats is wider, in order to let the air flow in and cool the power house under the massive bonnet. Speaking of which, there is a wide air-intake and massive powerdomes, as well as black surfaces. There are also louvers on the sides, on the upper area of the front wings, for further optimizing the air flow. The wheel arches also feature gaps that assist aerodynamics.

Extended side skirts and matte black multi-spoke wheels with Michelin tires highlight flowing sideline, while the rear screams madness. There is the wildest air wing at the tail, in glossy black. An air diffuser and dual exhaust pipes complete the sporty DNA of the model.

What hides beneath the hood of the Mercedes-AMG GT R Black Series?

Unofficial information that is yet to be confirmed claims that the car uses the same V8 4.0-liter V8 in its most potent version. It is expected to develop 720 horsepower and a peak torque of 850 Nm.

These would be figures way above what the Mercedes-AMG GT R sports: 585 horsepower and 700 Nm. While the standard GT R is capable of accelerating from a standstill to 100 km/h in 3.6 seconds, the Black Series should inch closer to the 3.0-second milestone.