One of the most famous American comedians, Kevin Hart, has been recently spotted taking a ride in his Mercedes-Benz SLS AMG.

Kevin Hart made quite an appearance in his shiny black Mercedes-Benz SLS AMG for the Inaugural Los Angeles Fatherhood Lunch which was hosted by Jerry Seinfeld at the The Palm Restaurant in Beverly Hills, California. Kevin was wearing a Saint Laurent leopard print polo shirt, black Balmain biker jeans and a pair of Saint Laurent black/white court classic high-top sneakers. 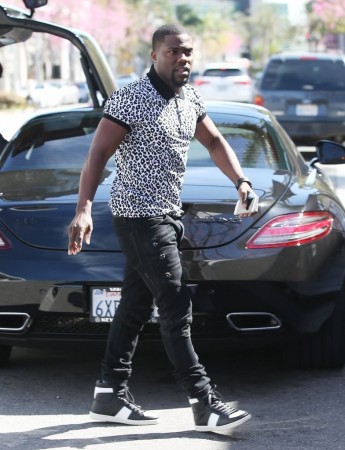 As we all now, when talking about the rich and famous, most of them prefer to drive fully electric cars, hybrid or even plug-in hybrid models, while trying to promote eco-friendly vehicles. The image of protecting the environment is more important than anything and most of them try to influence behaviours. But, from time to time, some artists chose to stand out from the crowd with some mighty cars. In this category fits Kevin Hart, one of the most renowned comedians in America, who chose to drive a Mercedes-Benz SLS AMG, a supercar finished in an appealing black shade.

The Mercedes-Benz SLS AMG left the production line last year and it was replaced by the smaller and cheaper Mercedes AMG GT. The SLS AMG was manufactured in Sindelfingen, Germany and it was offered in two variants, the coupe and the roadster. The power came from a 6.2 litre V8 engine that delivered 563 CP and 650 Nm of torque.

The famous comedian seems to be quite a fan of Mercedes-Benz, because most of the times he drives his other car, a Mercedes-Benz G 63.