Top Gear is not dead… in spirit at least! Jeremy Clarkson returns with Mercedes AMG GT S – Porsche 911 Turbo – Corvette Z06 fight, joined by team mates Richard Hammond and James May for what could very well be their best video test to date.

Set to air on stage of their Clarkson, Hammond and May Live tour, the 4-minute faux Top Gear review was shot at the beginning of May with the ex-Top Gear producer Andy Wilman in charge. The Thruxton circuit in Hampshire is the new proving ground hosting the three petrolheads’ antics. 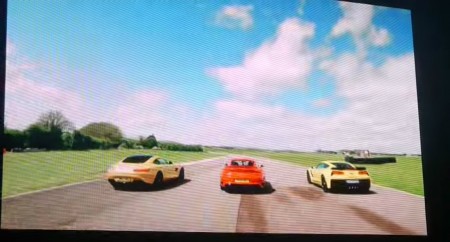 This is a sign of (GOOD) things to come with Clarkson expected to make an official announcement regarding the three amigos’ return to the telly on ITV (for their UK based fans) and Netflix (in the U.S.).

The former filming crew including the editors and main cinematographer also jumped ship so everything is wonderfully familiar in therms of visual flare and… script extravaganza. Tire smoke, crazy drifting, camera angles, even the music is eerily similar to the golden Top Gear era. It’s clearly only a question of time until our three favorite motoring hosts will be back in superstar form on the television.

ENJOY CLARKSON’s RETURN IN THE VIDEO BELOW. Did the Mercedes-AMG GT S won? We won’t spoil the surprise.